Each year, as the rains cease and the long, hot, dry days pile up on top of each other like a pile of kindling, OFI faces one of the most difficult challenges to protecting orangutans and their forest habitat: the fires. This year is no exception. The fires are here and they are bad. In fact, the fires are exceptionally bad this year.

The weather forecasters have been predicting a record-breaking El Nino season for the last few years. On the west coast of the United States, El Nino is known as the bringer of heavy, unexpected rains. In Borneo, El Nino has the opposite effect. It brings parched, arid, and exceptional droughts to the island. As the skies around Pasir Panjang and the Orangutan Legacy Forest are increasingly filled with smoke, it is seems El Nino has arrived in all its power. The fires are not limited. The whole of Kalimantan (Indonesian Borneo) is smothered in smoke. 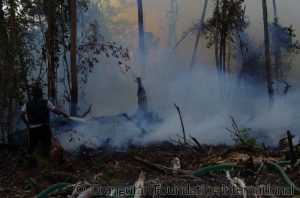 The haze is pervasive. The smoke is so thick it blocks out the sun. Morning fog does not fade away and midday darkness has been the norm for weeks now. It has rained only two days in the last six weeks. The little rain that did come was sparse and fleeting. It was not enough to dampen the soil or penetrate the peat that lies beneath much of the forest in Borneo, including a large area of OFI’s Orangutan Legacy Forest. It is the peat that makes fighting fires here exceptionally difficult. Peat soil is soft and our staff’s feet sink as they try to walk; in some places, they are pulled in to their knees. It is a challenge to avoid falling or stepping in areas that are still hot from recent blazes. Carrying hoses and fire-fighting supplies across this peat soil to get them where they’re needed is dangerous. Not to mention, peat soil itself is flammable. In a peat swamp forest, it is not only the plants and trees that burn: the ground itself can go up in flames! As the peat may be a few meters deep, embers remain underground for days after we put out the flames above the ground. The embers slowly creep under the ground, traveling to other areas, and setting them aflame. 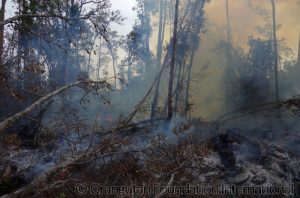 Each day OFI’s firefighting team assess the situation. Team members are deployed to the areas with the most urgent need. Generators, hoses, pumps, drinking water and gasoline are stacked into trucks and delivered to the staff already in the field. Once they arrive in the field, these supplies often have to be carried by foot to the site of the fire. In the challenging conditions, it can take hours to cross several kilometers to reach the fires. Access to these remote forest fire areas is further complicated as they are surrounded by degraded and abandoned mining areas pitted with sand and dangerous sink holes. Our drivers are constantly searching for new and better trails and access points to get people and supplies to where they need to be but sometimes it’s impossible to utilize vehicles and firefighters have to simply walk, carrying supplies on their backs.

As if there aren’t already enough challenges, nature throws another element into the mix: The Wind! The winds over the last few weeks have been relentless. The wind is an added danger and is often the source of much frustration for our firefighting team. Day and night winds blow in from the nearby coast, fanning the fires and igniting the embers below the ground. Fires that appear to be out re-ignite tens of meters away from the original sites without so much as a hint or a warning. It makes fighting fires all the more dangerous for our team who can’t get upwind as blazes ignite on all sides.

Our new Orangutan Legacy Forest has, sadly, been seriously threatened by blazes many times this year already. The moat that we have dug around the Orangutan Legacy Forest, to demarcate the forest and to serve as a source of water to ease fire-fighting efforts, has a new purpose. It is the final “break” for the flames. In the most hard-hit places, the moat is down to its last trickle of water. In many places, the “buffer” forests outside of the Orangutan Legacy on the other side of the moat have already been burnt to the ground. There have been too many hot-spots for our staff to fight all at once and so the moat has become the “line of last defence”. Our fire-fighting team has bravely held the line as they know it is the point where the fire must be stopped, at all costs, if the Orangutan Legacy Forest and its relic population of wild orangutans is to survive.

The Field Manager and head of the Care Center, Pak Tumin has been studying, protecting and caring for orangutans with OFI for over 30 years as well as fighting fires season after season. This year, he has been at the moat every single day of the last five weeks. Alongside the rest of the team, he has been hauling hoses, fixing pumps, securing water sources, and strategically directing the efforts. Pak Tumin’s work continues long after other staff people have gone home, and he often returns alone on his motorbike late at night. If it weren’t for Pak Tumin’s constant presence and action at the front line of the fire-fighting battle, our team’s supplies and high spirits would have dried up long ago. Despite the dangers of the difficult job, staff members are proud to be chosen by Pak Tumin to join the fire-fighting team. They know that being asked means that they can be relied upon.

The fires have not been limited to our Orangutan Legacy Forest. So far we have been monitoring and fighting other hot spots within the area of the Pasir Panjang Village forest and Tanjung Puting National Park. These fires are especially worrying, being so close to our orangutan facilities. Because of this, more of OFI’s orangutan release and monitoring teams must be pulled from their regular duties to monitor the fires and attempt to put them out. 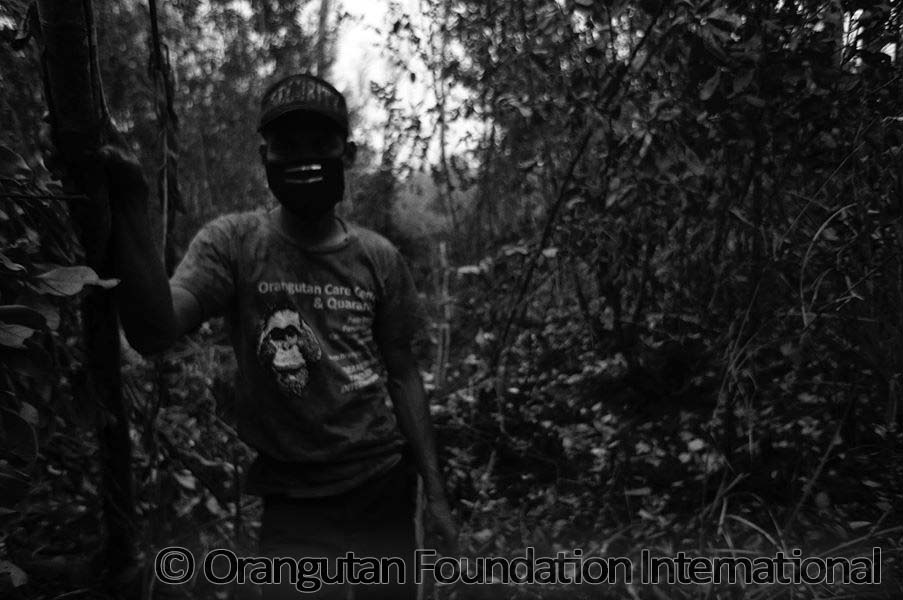 Our team has had little rest the last month for as one fire is put out another rears its ugly head a short distance away. But despite the difficulties, the OFI team continues to fight! OFI staff are keenly aware of how dangerous these fires are for forests and for wildlife. They rise to the challenge bravely, taking it upon themselves to do anything and everything necessary to prevent fires from reaching OFI’s camps, from crossing rivers or fire breaks, and from reaching ancient primary forests. This can mean rotating turns sleeping and fighting night and day, carrying water and pulling hoses for kilometers, and living in the heat for months as we wait out the rains. Smoke inhalation, burns from peat ash, and the danger of falling trees are a daily threat. Although OFI staff are experienced in these conditions, the risks are always there.

As we continue to fight these reoccurring fires we now face painful decisions about prioritizing our efforts. There are just too many fires burning for us to reach them all. It can be a discouraging struggle. Over the last few weeks, Pak Tumin has been leading the team to fight a fire that has come within meters of one of the patrol camps at the Orangutan Legacy Forest. This fire blazed on for more than two weeks as it crept closer and closer to the camp. Pak Tumin’s team persisted, despite the elements, and fought day and night to keep the camp from being lost. As this story is written the fire is coming under control but still not out. Pak Tumin repeats to staff and other management “We just have to fight to the best of our ability. There is nothing more we can do.” 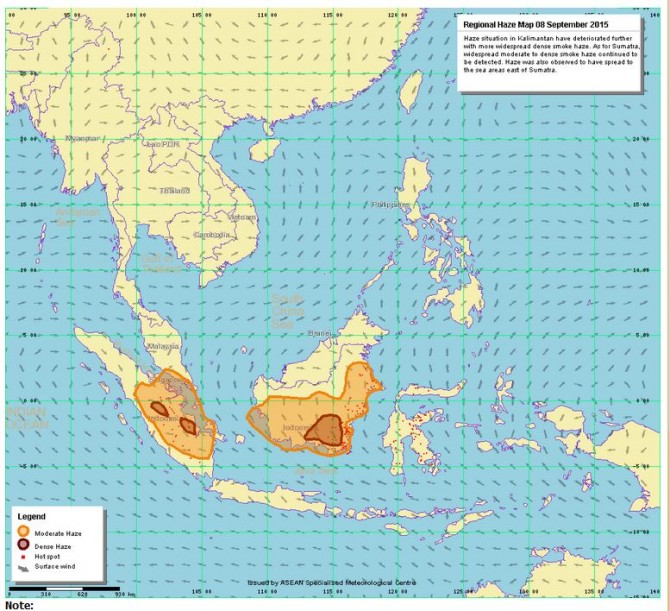 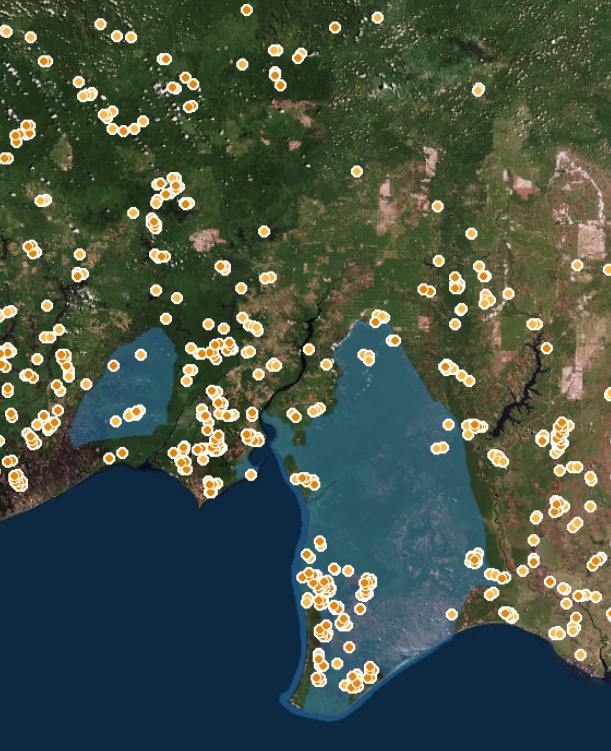