By Guest | In Bears, Stories | 2 Comments 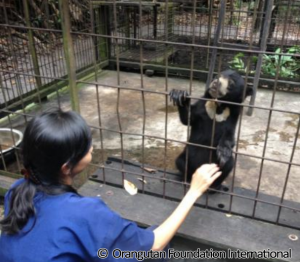 When “Selina” a female sun bear cub, whose mother was probably killed in January 2014, and who was handed over to OFI in late 2014, arrived it was immediately apparent she had extreme difficulty passing feces as well as suffering from notable pain because of this. OFI was informed that previous to her arrival at the OFI Care Center, Selina had suffered trauma to her pelvis that likely had resulted from fractures of the pelvic girdle and had led to serious pelvic deformity when these fractures eventually healed.

This trauma caused a notable narrowing of the pelvic canal, which made it extremely difficult for Selina to pass faeces. Unfortunately, this chronic obstruction caused permanent damage to her large intestine, resulting in a “megacolon”. A “megacolon” occurs when the large intestine becomes permanently dilated and unable to contract. The accumulating feces cause pain by further distending the already enlarged large intestine, and the large number of bacteria that build up make animals feel chronically ill and nauseous. As seen in these cases with other species, Selina has notably stunted growth for a sun bear cub of her age due to her condition. At 20 months of age, she resembles a cub of six months of age. 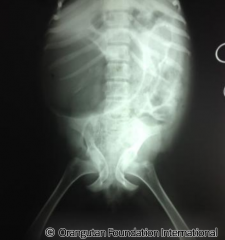 While her symptoms were managed as best possible medically with laxatives, medication, and a special diet after her arrival at the OFI Care Center in late 2014, she still had a very poor quality of life, and a long-term solution was needed.

Experienced bear veterinarian Dr Kirsty Officer and specialist wildlife veterinary surgeon Dr Romain Pizzi made a trip to the OCCQ to treat Selina. Selina was briefly anaesthetised on the 11th August, 2015 for a detailed examination of her pelvis and x-rays to assess her current condition and plan her surgery. She weighed 10kg. She was then anaesthetised on the 13th August and surgery performed to relieve the obstruction and to remove the large section of abnormal damaged large intestine. Selina did well immediately after surgery, and appears bright, playful and is eating, with no apparent complications. Her wound is healing well. 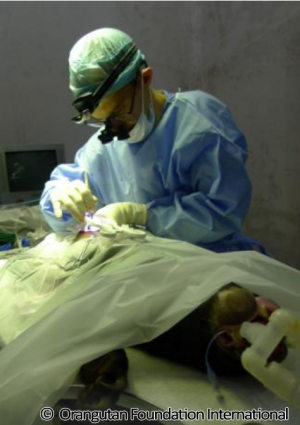 Dr. Romain Pizzi concentrating during the extensive surgery. Many thanks to him for helping improve Selina’s quality of life.

All surgery carries a degree of risk. This was a large and complicated surgery. Individual animals may eventually develop a variety of problems or complications. Currently Selina appears to be doing well, and we are hopeful this surgery will succeed in notably improving her quality of life. She has been eating a more “normal” bear diet and has not required the laxatives and other attention to diet she did before her surgery. Selina has stopped whimpering and vocalizing from pain as she frequently did before the operation.

Note:
OFI wishes to thank all of our donors who supported the funding of this life changing surgery for Malayan Sun Bear Selina. Please consider donation on a regular basis to OFI to help support the ongoing care of all of our animals, including the Malayan Sun Bears. 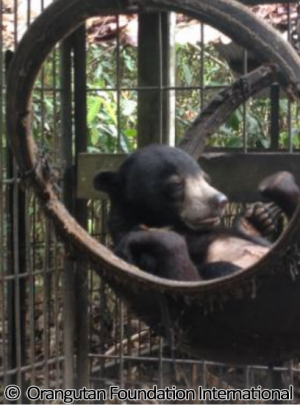 Selina alert but resting in the days post operation.

We especially send our deep gratitude to Dr. Romain Pizzi and Dr. Kirsty Officer who donated their time and expertise to help Selina and other animals during their visit.

OFI is deeply appreciative of the support and concern provided by OFIA (Orangutan Foundation International Australia) during this difficult time for Selina.