All orangutans are special but sometimes some are just slightly more special than others in that you remember them better. They stand out. They catch your eye and suddenly you can’t stop observing them. 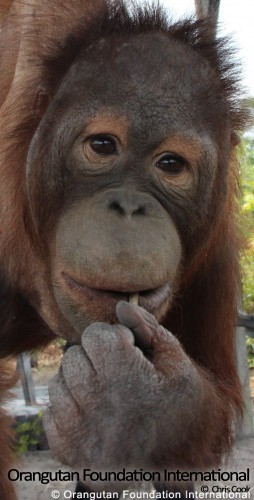 This happened to me with Piko, a male juvenile orangutan at the Orangutan Foundation International (OFI) Orangutan Care Center and Quarantine in Central Kalimantan, Indonesia. With a round face, big belly, and large throat pouch, Piko stands out from the crowd. He has a larger body and is more robust in his build than “friends” his own age. So even from behind I can always spot Piko as he swings in the playground.

What really forged my interest in Piko is his mischievous nature. On daily release whenever he comes near me, he circles around in tumbling somersaults. Cheeky Piko is immediately at ease with most visitors and loves to make friends. No shrinking violet, Piko immediately wants to play and interact. This interaction is not always negotiable when Piko comes swinging enthusiastically towards you on the ropes strung across the playground. With Piko’s legs flailing, you need to be careful not to get a foot in the mouth! But he means no harm. Piko is simply playing, wanting to interact, and to form a friendship with you.

Piko arrived at the OCCQ in the same month as his friend Albin. Both orangutans were around 9 months old at the time. The bond that these two young orangutans forged after being orphaned is still strong even now. During one of Piko’s daily releases, his friend Albin had a cut on his foot. As the caregivers administered medicine to Albin to make sure that the cut was clean and not infected, Piko became concerned that something was wrong. He decided to launch a rescue mission and kept vigorously flinging himself at the caregivers to make sure that Albin was all right. Once he was satisfied that Albin was not hurt he went back to playing, content in the knowledge that his friend was not in any way harmed. Piko and Albin have clearly formed a special connection over the years, being around the same age and having been orphaned around the same time. Piko and Albin seem to be almost like siblings.

During one of Piko’s daily releases, his friend Albin had a cut on his foot. As the caregivers administered medicine to Albin to make sure that the cut was clean and not infected, Piko became concerned that something was wrong.

Piko shares a sleeping enclosure with friends Lodik, Franz, Yosuke, Albin, DrBeetlenut, and Joel. Among friends there are always best friends. Without a doubt, Piko is closer with Lodik than any other orangutan. He is best friends with Lodik and like a brother with Albin. Piko and Lodik always snuggle up to each other each night when going to sleep. You will often find them with an arm around each other after they wake up in the morning in their sleeping enclosure. Nothing is sweeter than watching them side by side, arms around each other, the picture of best mates. All seven juvenile male orangutans who share the sleeping enclosure are great friends, relishing their time swinging together in the juvenile playground. In fact, the seven juvenile orangutans in the one sleeping enclosure, Piko and his friends, are much calmer, gentler and, more laid back than I had expected them to be. Although full of energy, they are still gentle and retain a sweet, youthful curiosity.

Piko is the largest physically of his friends but best friend Lodik is the tallest. Piko is the alpha of the group but is generally not a bully although he isn’t above stealing the odd fresh, young coconut from friend Joel who has just spent the last ten minutes ripping the green outer husk open with his teeth and hands. Piko lays back and drinks the sweet coconut water at his leisure, taking advantage of Joel’s hard work. Joel simply gets another coconut and starts all over again. 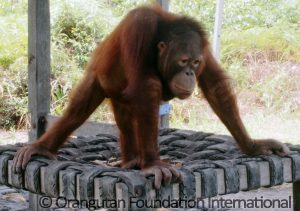 Piko loves to eat all the fruit provided by his caregivers and is not a picky eater. He usually doesn’t steal food from his friends and loves to receive enrichment parcels. (The incident with Joel is an exception.) Depending on his mood some days Piko will eagerly rip open the parcels to find the nutritious treats inside, whilst on other days he will slowly investigate different ways to open the parcel.

Each afternoon at the Care Center branches are given to each orangutan to make a night nest in his or her sleeping enclosure. Some of the younger orangutans simply use the branches to play with, but Piko is interested in using branches to make a sleeping nest, just like he would if he was in the wild. Although he still enjoys playing with leaves and branches before going to sleep, he is clearly beginning to understand the nest building process. 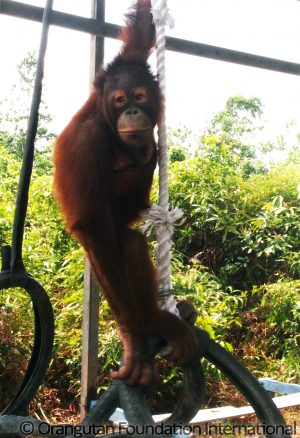 Burlap sacks are a popular enrichment item handed out to the OCCQ orphan orangutans. There is something that intrigues orangutans about putting things over their heads. Piko loves playing with burlap sacks when they are given out during daily release in the juveniles’ playground. In fact, he will often try to steal a burlap sack from one of his friends in order to play with the sack himself. Once the sack is in his possession, he places the burlap sack over his head, disappearing into his own world. We can only guess what that world is like. Unlike other orangutans who are content to sit calmly inside their sack, Piko keeps on moving. He tumbles, runs, and even swings through the playground with the sack over his head. It is a miracle he does not run into anything. Yet somehow he senses where the obstacles are and manages to avoid them.

Piko loves to swing along on the ropes in the playground. Building his strength and the skills he will need in the forest, he plays non-stop. While some of his other friends swing along with grace, as graceful as juvenile boys can be, Piko barrels along. Often throwing himself mid swing into a somersault, he lands on the ground and keeps running, almost like a gymnast. In fact, I once saw Piko swing down with a fresh young coconut clutched to his chest, and somersault across the ground eight times in a row! Piko is only quiet during his daily releases when he is lying back drinking a coconut holding it to his mouth with his feet. That is virtually the only time that I have seen him to be no longer in motion. Otherwise, his energy seems boundless.

There is no doubt in my mind that as Piko grows he will continue to use his boundless energy to learn more about the forest. With time Piko, who even now is a leader among his friends, will grow to become a strong, even more robust, and handsome orangutan. I cannot wait for the day when Piko will be free to swing energetically through the trees of the great forest as he was meant to do from the very beginning.