Tanjung Puting is one of the natural wonders of the world. You may not believe this after you have been there only two days or three days, but after the fourth or fifth day something happens.

You are captivated completely by the purity of the air, the openness of the night sky with the most remarkable view of the Milky Way, the magnificence and dignity of the gentle orangutans, the thundering downpours that instantly cool the air, and the clarity of the brilliant crimson sunsets. Tanjung Puting is the largest and most diverse protected example of extensive coastal tropical heath and peat swamp forest which used to cover much of southern Borneo. The area was originally declared as a game reserve in 1935 and a National Park in 1982. While the Park has a checkered history of weak protection, nonetheless, it remains substantially wild and natural. 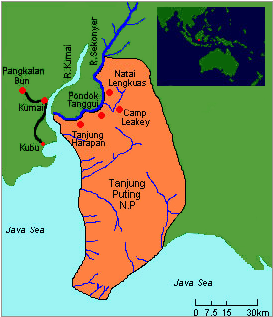 Tanjung Puting is covered by a complex mosaic of diverse lowland habitats. It contains 3,040 km2 (or 1,174 square miles) of low lying swampy terrain punctuated by blackwater rivers which flow into the Java Sea. At the mouth of these rivers and along the sea coast are found nipa/mangrove swamps. Mangroves teem with animal life. Tanjung Puting also includes tall dry ground tropical rain forest, primarily tropical heath forest, with a canopy of 30 meters (approximately 100 feet) with “emergents” exceeding 50 meters (approximately 165 ft) in height, seasonally inundated peat swamp forest with peat in layers two or more meters (approximately 7 feet) deep, open depression lakes formed by fire, and open areas of abandoned dry rice fields now covered with elephant grass and ferns. The tropical heath forest which is called “kerangas” in parts of Borneo, is only found on very poor, typically white-sandy soils and is characterized by medium-sized trees.

“Clouded leopards, civets, and Malaysian sun bears cavort in the park as do mouse deer, barking deer, sambar deer, and the wild cattle known as banteng.”

The best known animals in Tanjung Puting are the orangutans, made famous through the long-term efforts of the Orangutan Research and Conservation Program (predecessor to OFI), based at the landmark Camp Leakey research station. Tanjung Puting also boasts the bizarre looking proboscis monkey with its “Jimmy Durante” nose as well as seven other primate species. Clouded leopards, civets, and Malaysian sun bears cavort in the park, as do mouse deer, barking deer, sambar deer, and the wild cattle known as banteng. Tanjung Puting hosts over 230 species of birds, including hornbills, deep forest birds, and many wetland species. Tanjung Puting is well known for its “bird lakes,” seasonal rookeries for a half a dozen species of endangered waterbirds, including the only known Bornean nesting grounds for white egrets. Tanjung Puting also has two species of crocodiles, dozens of snakes and frogs, numerous threatened species, including the fortune-bringing and highly endangered “dragon” fish also known as the Arwana (bony-tongue). Among the most flamboyant of these animals are the many species of colorful birds, butterflies, and moths found in the Park. 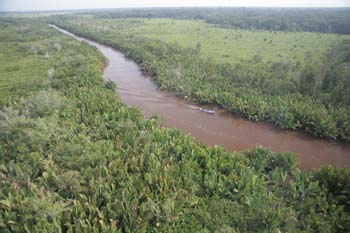 Tanjung Puting sits on a peninsula that juts out into the Java Sea. The peninsula is low lying and swampy with a spine of dry ground which rises a few feet above the omnipresent swamp. The north of Tanjung Puting is characterized by gentle hills and gold-bearing alluvial plains. In the past maps of the region commonly portrayed a ridge of mountains coming down into Tanjung Puting. This mountainous ridge does not exist; in fact, nowhere does the altitude rise above 100-200 feet in Tanjung Puting.

Tanjung Puting is a veritable hothouse of ecodiversity. The diverse habitat zones shelter slightly different fauna and flora providing a great variety of microhabitats for plants and animals and thus, the opportunity for many species to be present in close proximity. In a Bornean context, tropical heath forest by itself is not representative of the largest trees, the tallest canopy, or the most diverse ecosystem.

Tropical swamp ecosystems are little represented in protected areas throughout Southeast Asia but are omnipresent in Tanjung Puting. In the peat swamp forest, many trees have stilt roots or aerial roots as adaptations to frequent flooding.

Aside from its remarkable biological attributes, Tanjung Puting is highly important for the well-being of the surrounding local human population. The wetlands provide vital ecological services such as flood control, stream control regulation, erosion control, natural biological filtration system, and seasonal nurseries for fish which are the major source of local animal protein. Many of these services have an impact well beyond the local area. For instance, the waters surrounding Tanjung Puting attract fishing vessels from many different parts of Indonesia. In addition, local people benefit from a great variety of forest products including honey, waxes, aromatic woods, fibers for ropes and cloth, medicinal plants, fuel oils, thatching materials, rattan, firewood, incense, wild rubber, edible latexes, resins, natural pesticides, fungicides and possible virocides. 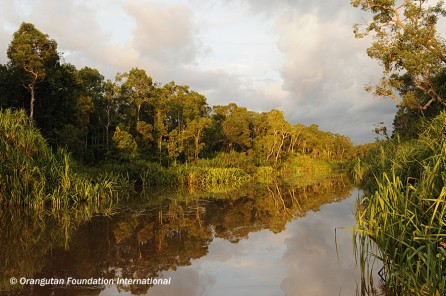 For the above reasons and many other reasons not noted, Tanjung Puting is recognized as one of the most important and outstanding provincial treasures in Kalimantan Tengah. The national government has also made a strong commitment to protect the forest, its wildlife, and to manage the park wisely. Tanjung Puting has increasingly gained international prestige and recognition. As a result, more and more visitors from all over the world are experiencing a fresh new outlook on nature and an appreciation of the tropical rain forest which was humankind’s original “Garden of Eden.”

The peat swamp and fresh water swamp forest associations present in Tanjung Puting were at one time extensive along the south coast of Borneo from Banjarmasin in the east to the Kapuas River near Pontianak in the west. These swamps extended up the northwest coast of Sarawak and Brunei and as far as the Klias peninsula in Sabah. In Sarawak in general, peat swamp forests are very well developed and they are still very important there as a natural resource. In Kalimantan, however, much of the swamp habitat has been converted, both permanently and on shifting cultivation basis, to rice fields. Swamp habitats, as found in Tanjung Puting, are becoming more difficult to find. Although Tanjung Puting has suffered some encroachment from human activity, the Park area is still wild and pristine. The vegetation supports a large population of animals, making this one of the most important areas in Southeast Asia for the preservation primates, birds, reptiles and fish.

Read about our Forest Patrols in Tanjung Puting National Park

About the Care Center