The forests of Indonesia, along with their thousands of plant and animal species, are being destroyed at an alarming rate due to massive illegal logging and clearing for palm oil plantations.

Indonesia’s tropical forests are of global importance, covering over 98 million hectares (242,163,274 acres). The rapid deterioration of tropical forests is causing incalculable losses in terms of biodiversity and is pushing species such as the orangutan ever closer to extinction.

“Twelve percent of all mammal species, 16% of reptile and amphibian species, and 17% of bird species are found on the 17,000 islands that constitute Indonesia.”

Most of Indonesia’s forests are found in the Indonesian half of New Guinea, and on the islands of Borneo and Sumatra. The forests of Indonesia represent 10% of the world’s remaining tropical forests. Indonesia’s forests are the second largest in the world after the forests of Brazil. Unfortunately, over the years Indonesia has lost up to 80% of its original forest habitat and continues to lose 6.2 million acres (2,509,051 hectares) a year. Indonesia entered the Guinness Book of World Records in 2008 and 2009 for having the highest rate of deforestation of any country in the world!

Indonesia is one of the five most species-rich countries in the world, with a high rate of endemic species. Twelve percent of all mammal species, 16% of reptile and amphibian species, and 17% of bird species are found on the 17,000 islands that constitute Indonesia. Of Indonesian species, 772 species are threatened or endangered, giving Indonesia the third highest number of threatened species of any country in the world. Of Indonesia’s approximately 40 primate species, 20 have lost more than half their original habitat in the last ten years; orangutans are among those species.

Indonesia’s Forests Are Disappearing at an Alarming Rate 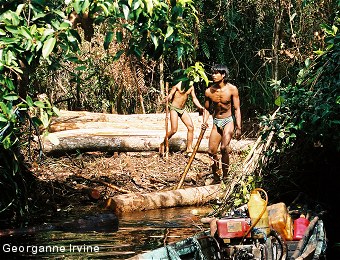 Illegal loggers working in the forest in Lamandau.

Indonesia’s forests represent 10% of the world’s remaining tropical rainforests. By 2001 Indonesia had lost 99 million acres of forest during the previous 32 years, which is equivalent to the combined size of Germany and the Netherlands. The current rate of forest loss is accelerating.

After Malaysia and the United States, Indonesia has the third highest number of threatened species with 772 species. However, Indonesia has the absolute highest number of threatened mammal species with 147 species – an increase of seven species since the year 2000. According to a recent article in the conservation journal Oryx, 1000 orangutans are lost in Sumatra each year; in Borneo, the number is probably even higher.

A study done in 2000 by the Indonesia-United Kingdom Tropical Forest Management Programme concluded that 73% of logging done in Indonesia was illegal. While Indonesia’s forest ministry official harvest figures are just under 882 millioncubic feet per year, the combined log consumption capacity of plywood, sawn wood, and pulp and paper industries is 2.6 billion cubic feet per year, which means that industries obtain between one-half and two-thirds of their logs from illegal or unsustainable sources. Illegal logging produces 1.8 billion cubic feet of logs annually, resulting in state financial losses of approximately $3.37 billion. The value of timber stolen from TNTP alone is currently estimated at $8 million each year although it has been much higher in the past.

World demand for palm oil has increased by 32% over the last five years with the recent rapid expansion of the food and industrial manufacturing industries, growing at a rate of 7% each year. In fact, palm oil is the world’s best-selling vegetable oil, representing 40% of the total global trade in edible oils. Indonesia accounts for 31% of the world’s production of palm oil, and is expected to be responsible for 41% by 2005. The aim of the former Suharto government was to create a total of 13.5 million acres of palm oil plantations by 2000. By 1999 the figure had reached 7.4 million acres, which is nearly five times the size of Bali.

The sudden increase in palm oil use has led to the clearing of Indonesia’s tropical forests to create monoculture palm oil plantations. Studies in Malaysia and Indonesia have shown that between 80 and 100% of the species of fauna inhabiting tropical rainforests cannot survive in oil palm monocultures (Wakker 2000). In 1999, nearly 800,000 acres of forest were converted for palm oil. Global demand is expected to increase by 50% in the next five years, primarily because palm oil profits are assured by cheap labor, low-priced land, a lack of effective environmental controls, easy availability of finance and support, and a short growth cycle.

As much as 40% of the wood used by Indonesian pulp producers between 1995 and 1999 came from illegal sources. Massive expansion in plywood, pulp, and paper production in the last two decades has brought demand for wood fiber to exceed the legal supply by 1.2-1.4 billion cubic feet per year. Pulp and paper subsectors have expanded by nearly 700% since 1987.

Approximately 22 million acres of land were damaged by the 1997 and 1998 fires in Indonesia that were largely caused by timber and palm oil plantation companies clearing land. According to Remote Sensing Solutions GMBH, the 0.80 to 2.57 billion tons of carbon released during that time was the biggest ever measured, corresponding to 13 to 40 percent of the annual global production by burning fossil fuels like oil, coal, and gas. The estimated financial consequences of the fires were over $3 billion from losses in timber, agriculture, and non-timber products, plus the loss of hydrological and soil conservation services as well as biodiversity benefits. Haze from the fires cost an additional $1.4 billion for health treatment and lost tourism revenues. Poachers were killing proboscis monkeys along the river en route to Camp Leakey until OFI began patrolling the area.

OFI is a nonprofit organization dedicated to the conservation of wild orangutans and their rainforest habitat. Co-founded by Dr. Biruté Mary Galdikas and a group of scientists and laypeople in 1986, OFI operates Camp Leakey, an orangutan research area within Tanjung Puting National Park. OFI also runs the Orangutan Care Center and Quarantine facility in Pangkalan Bun, which is home to 330 displaced orphan orangutans, and co-manages the Lamandau Reserve, where rehabilitated orangutans are released into the wild. Through its field programs, OFI also provides employment for over 200 local Indonesians in the vicinity of Tanjung Puting National Park and Lamandau Reserve. OFI partners with Boston-based World Education to empower farmers in the local villages around TPNP, raise their crop yields, and provide alternative employment in the agricultural and agroforestry sectors. The goal is to build a “social fence” around the Park that local people will not breach.