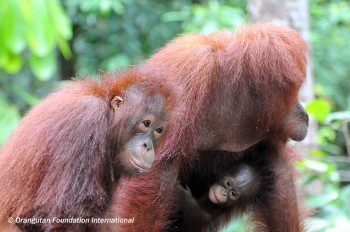 Orangutans are semi-solitary species but remain, to some degree, somewhat social.  Flanged adult male orangutans are the most solitary of all orangutan age/sex classes. Their participation in social groups is usually limited to temporary sexual “consortships” with adult and adolescent females. Wild orangutan fathers play no direct role in the upbringing of their offspring. Non-receptive adult females associate with their young, with other adult females, and with adolescents who are not necessarily their own and generally avoid mature males. The mother-young relationship lasts for many years, whereas the time spent with other orangutans is relatively short. Subadult males usually associate with females, particularly with adolescents, but are not generally aggressive towards other males. Adolescent females travel together, especially when age differences are minimal. This semi-solitary social system may have evolved as a result of a ripe fruit diet, scattered food distribution, and a lack of large arboreal predators. (Tigers in Sumatra are terrestrial).

Male-male competition for access to sexually receptive females is a major factor in orangutan adaptation. Flanged adult males use their pendulous laryngeal sacs as a resonating chamber for the “long call,” parts of which sound like a loud roar. Sometimes the sound of a long call can carry for almost a mile. The male orangutan’s long call seems to play an important role in repelling male rivals and advertising availability to sexually receptive females. Adult male orangutans are intolerant of each other, and the encounter between two flanged adult males usually results in either aggression or avoidance. Combats almost always take place when two cheekpadded males are in the presence of a sexually receptive female. These combats may last for a few minutes (especially if the two males have fought before) or an hour or more. Males may be severely wounded during these combats. Almost all flanged males exhibit injuries as a result, whether it is missing and/or stiff fingers or toes, healed scars on their faces or heads, missing eyes or the like. Orangutan females rarely exhibit violent aggression of the sort seen in combat, and hence do not sustain such injuries. 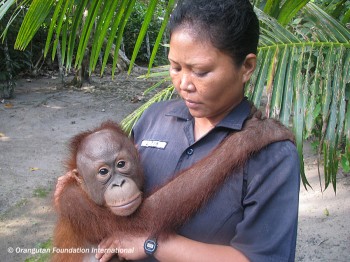 A young orangutan with his caretaker at the Orangutan Care Center and Quarantine (OCCQ).

Orangutans have the slowest known life histories of any mammal. They take the longest time to grow up and they are the slowest to reproduce. The female orangutan’s menstrual cycle is 29 to 32 days, with menstruation lasting three to four days. The gestation period is approximately eight and a half months. Usually a single offspring is born, weighing about 3 ½ pounds. Twinning occurs but is rare. (In forty years of observation, twins were only seen once at Tanjung Puting National Park. The mother was an older, free-ranging, wild born ex-captive orangutan . One of the twins was born weak and died shortly after birth.) Wild female orangutans usually become sexually active at approximately 12 years, but they will often have their first offspring only at 15-16 years of age. At Tanjung Puting wild females give birth on average every 7.7 years.

Infant orangutans stay in close contact with their mothers for a long time. For the first two years of a young orangutan’s life, he or she is completely dependent on mother for food and transportation. A baby orangutan clings to his/her mother’s stomach, side, or back while she moves through the trees, and feeds on his/her mother’s breast milk.

They also use leafy branches to shelter themselves from rain and sun, and sometimes even drape large leaves over themselves like a poncho.” 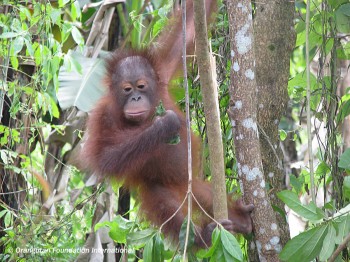 Such prolonged association between mother and offspring is rare among mammals. Probably only humans have a more intensive relationship with their mothers. Primatologists believe that orangutans have such long “childhoods” because there is so much that they need to learn before they can live alone successfully. Young orangutans learn almost everything from their mothers, including: where to find food, what to eat and how to eat it (sometimes this involves using special tools), and how to build a proper sleeping nest. Also, mothers probably protect young orangutans from predators such as clouded leopards and pythons in Borneo, and tigers in Sumatra.

Male orangutans exhibit a curious and little-understood case of “bimaturism,” also referred to as “arrested development.” This means that there are two “types” of mature male orangutans: flanged and unflanged males. A flanged male has big cheek pads on the sides of his face and a large pendulous throat sack under his chin. An unflanged male has neither of these traits, and his body is usually smaller. Unflanged males are sexually mature and fully able to father offspring; females, however, seem to prefer to mate with the flanged males. Because of this, unflanged males often resort to “forceful copulation” in order to attain matings. Meanwhile, flanged males emit loud booming “long calls’, presumably to attract receptive females as well as to let other males know their whereabouts. It is not fully understood exactly when and why a mature male undergoes the transformation from unflanged to flanged, or even if every male undergoes this transformation (although it seems likely that he does eventually). It has been hypothesized that the existence of a dominant flanged male within the sensory range of an unflanged male inhibits the unflanged male’s development (by stimulating release of special hormones?). Thus, not until the dominant flanged male dies, moves away, or is defeated, or the subadult male himself moves away or stays low, can the unflanged male develop his cheek pads and large size.

Only humans have a more intensive relationship with their mothers. Primatologists believe that orangutans have such long “childhoods” because there is so much that they need to learn before they can live alone successfully”

Life in the Trees

Orangutans are the largest arboreal animal on the planet. Most of their lives are spent in trees where orangutans travel from branch to branch by climbing, clambering, and brachiating. Diurnal animals, orangutans spend a large portion (60% by time at Tanjung Puting) of daylight hours foraging for food. Since over 90% of the food orangutans eat is found in the canopy, their arboreal existence is not surprising.

Almost every night orangutans construct a new sleeping nest from branches, usually 15 to 100 feet up in a tree. Sometimes orangutans will make a mid-day nest for napping. Occasionally, they will also reuse an old nest, adding new branches.

Orangutans have high cognitive abilities comparable to the other great apes. This high level of intelligence manifests itself in tool-use and even the making of simple tools in the wild. Some tool use is idiosyncratic but other kinds of tool use represent cultural traditions in orangutan populations.

Orangutans have been observed making simple tools to scratch themselves. They also use leafy branches to shelter themselves from rain and sun, and sometimes even drape large leaves over themselves like a poncho. They have also been observed using branches as tools during insect foraging, honey collection, and protection against stinging insects, and to “fish” for branches or fruit that is out of reach. In Sumatra wild orangutans use tools to extract seeds from a hard shelled species of fruit. In captivity an orangutan was taught to chip a stone handaxe. 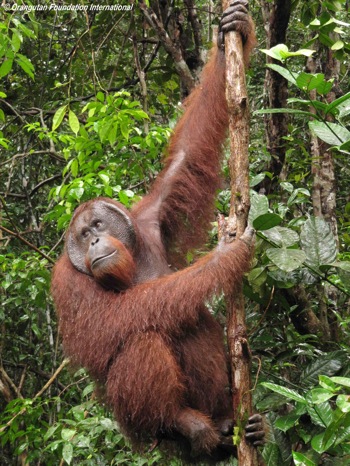 A flanged orangutan male hanging from a small tree

Not long ago many people thought culture was unique to the human species. However, in recent years scientists have found increasing evidence of socially learned traditions elsewhere in the animal kingdom. In 2003 a group of researchers, including Dr. Carel van Schaik and OFI’s president, Dr. Biruté Mary Galdikas, described two dozen behaviors that are present in some orangutan populations and absent in others. According to the report which appeared in the journal Science, these practices are learned from other group members and passed down through the generations. In parts of Borneo, for example, orangutans use handfuls of leaves as napkins to wipe their chins while orangutans in parts of Sumatra use leaves as gloves, helping them handle spiny fruits and branches, or as seat cushions in spiny trees.

Learn all about the history of OFI

More
© 2020 Orangutan Foundation International. All rights reserved.
Made by Calmar Webmedia and Total Donations and Flaticon