The Effects of Palm Oil

How does Palm Oil Harm Orangutans and other wildlife?

The main threat to the survival of orangutan populations in the wild is the massive expansion of palm oil plantations in Borneo and Sumatra. 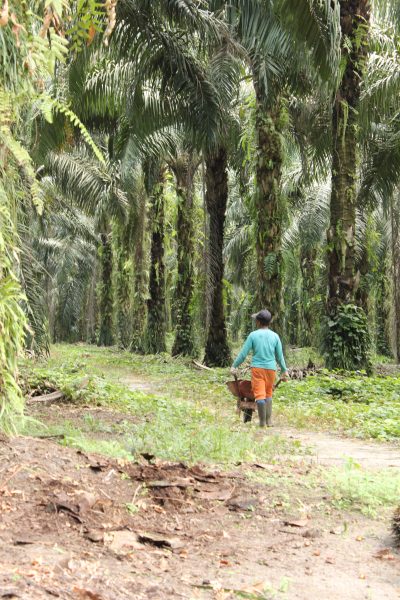 Palm oil is the most widely used vegetable oil in the world, having even surpassed soya in terms of usage. Surging global demand for palm oil has fueled massive forest destruction throughout Indonesia and Malaysia, countries that together account for 85% of the world’s palm oil production. Palm oil is ubiquitous! Half the packaged food (and other) products found on supermarket shelves now contain palm oil. Palm oil and palm kernel oil are found in all manner of baked goods, such as cookies, bread, and potato chips, as well as in chocolate and milk (where it adds Vitamin A). Palm oil has also replaced coconut as the main cooking oil traditionally used in Indonesia as well as replacing peanut oil in Myanmar. Palm oil is also extensively used in cosmetics and toiletries where it adds creaminess and/or foam to the product. Palm oil is an important ingredient in the manufacturing of soaps, shampoos, detergents, and toothpaste. Increasingly, palm oil is used as a biofuel.

Oil palms only grow in the tropics and need much water. Originally native to South America and West Africa, palm oil plantations have now spread throughout the wet tropics to Papua New Guinea, parts of Asia, Kenya, and also back to countries in West Africa and South America where the palms are native. The problem with palm oil is that vast areas of virgin tropical rain forest are clear cut to open up land for cultivation. Palm oil is a huge industry. Palm oil accounts for 11% of Indonesia’s export earnings and is the most valuable agricultural export. Overall, it is Indonesia’s third largest export earner.

The recent expansion of vast monocrop oil palm plantations in Asia, the Neotropics, and Africa threatens large areas of tropical rain forests. The two most affected countries in this expansion are Indonesia and Malaysia, home of the imperiled orangutans. The United Nations Environment Programme (UNEP) indicated in 2007 that oil palm plantations are the leading cause of rainforest destruction in Malaysia and Indonesia. Another study by Princeton and a Swiss institution reported that between 1990 and 2005, up to 60% of palm oil expansion occurred at the expense of primary tropical rain forest. The establishment of palm oil plantations has been a disaster not only for endangered wildlife such as orangutans and tigers (in Sumatra) but has also exacerbated conflict with local communities in Indonesia over traditional land rights. Local people have been evicted from their customary land holdings and local communities impoverished, leading to much conflict with palm oil concession companies.

In Sumatra at least 10.8 million hectares have been opened up for palm oil plantations. The situation in Borneo is similar. Large scale conversion of tropical rain forests has had an absolutely devastating impact on biodiversity in both Borneo and Sumatra. In addition, deforestation may cause soil erosion and, because most forests have been cleared through the use of fire, massive air pollution from smoke. Much of the land on which palm oil plantations have been established consists of peat swamp forest. The draining, burning, and conversion of peat swamp forests to palm oil has been especially damaging to the world’s climate as it has led to Indonesia being the third largest contributor of carbon to the world’s atmosphere after China and the United States.

Palm oil companies prefer to clear primary forests, rather than degraded areas or grasslands, for economic reasons. They don’t need to utilize or add as much chemical fertilizer (which is expensive) to forest land cleared by fire and fertilized from ash produced by the fire. In addition, the cost of clearing peatswamp forests is subsidized by the sale of commercially valuable timber taken from concession areas as part of the conversion process. After palm oil plantations are established, displaced starving orangutans are frequently killed in the most brutal ways as agricultural pests when they try to obtain food in the plantation areas.

The establishment of the Roundtable on Sustainable Palm Oil (RSPO)in 2004 set up voluntary guidelines for “greener” palm oil production and has tried to encourage palm oil expansion in a “sustainable” way that doesn’t ruin primary rain forests or violate the land rights of local people. However, while this seems like a promising development, it is debatable whether it has had much influence on what actually has been happening in the field as forests continue to be torn down and local people shunted to jail for protesting the taking of their land.

Read more about us and our work