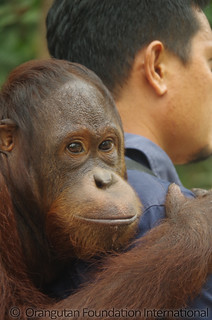 Abraham is a very calm and serious orangutan. His demeanor is contemplative and slow. His movements are purposeful, deliberate, and quiet. He is small for an orangutan his age. However, thanks to our special caregiver and veterinary teams at the Orangutan Care Center and Quarantine (OCCQ) in Kalimantan Tengah, Indonesia, Abraham has been steadily growing over the last six months. Abraham’s story is typical of many of the orphans that come into the OCCQ. He arrived at a very young age, estimated at approximately 3 months. Abraham came in a state of malnutrition and therefore was smaller than most orangutans his age. He probably had been in captivity for most of his short life and therefore deprived of his mother’s sweet milk during a crucial part of his early growth. During his time at the nursery facility at OCCQ, Abraham developed slowly and remained relatively small. 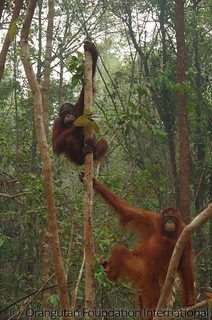 As he grew, Abraham developed lasting friendships with two female orangutans his age; “Lady Gilbert” (named after one of OFI’s former board members) and “Kent”. These two females were also smaller than others in their group.The close relationship formed among these three orangutans lasts to this day. The three currently share a sleeping enclosure at one of our external forest camps in the Pasir Panjang Village forest. The trio spend all of their time together,both in the forest and at night in their sleeping enclosure. Lady Gilbert has now since grown to be average size for an orangutan her age and is passing into adolescence. It appears that Lady Gilbert has taken on the role of Abraham’s adopted mother. Abraham closely follows Lady Gilbert in the forest, often climbing tree behind her. If frightened Abraham will run to her for comfort, exactly as a wild infant would do to his/her mother in the wild. Kent is also intimately close with her two friends, often seen wrestling, playing, and even sharing food with them.

As orangutans grow into juvenilehood, they are separated by gender at OCCQ. Due to the fact that males grow much larger than females of the same age, males will try to dominate females, sometimes aggressively. When the time came to separate Abraham from his two female friends and move him to an all male sleeping enclosure, an unexpected situation arose. Lady Gilbert’s behavior changed and she became inexplicably ill. Veterinary staff described her behavior as lethargic and sad. Her low grade fever would not go away. Caregivers suggested that returning Abraham to his previous sleeping enclosure with Lady Gilbert and Kent might solve the problem. As soon as the staff were able to bring Abraham back to his friends, Lady Gilbert’s illness disappeared and she quickly returned to her normal self!

Obviously a bond between orangutans may be so strong that their health and happiness depends on it. Thus, Abraham and his female friends remain together. We recognize that the care needed during the rehabilitation process comes in different forms.Often friendships formed between orangutans can be just as important as those between caregivers and their orangutan charges. In fact, Lady Gilbert and Kent may be providing Abraham something that we humans can’t. 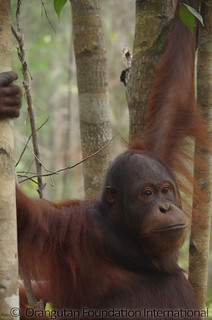 Orphaned orangutans are removed from their natural state in the wild where they receive important nutrients from their mother’s milk. They also are traumatized by the loss of their mothers and the loss of the constant close contact which is a hallmark of wild orangutan development. OFI does its best to give orphans the nutrients and care that they need but some suffer more than others. A special program for orangutans who require extra attention outside of general needs is a significant part of OFI’s ongoing care These orangutans often receive extra attention and are also given extra nutrition. Malnutrition can manifest itself in many ways. Some orangutans are thin, may have less hair, exhibit dry skin,or display other visual cues suggestive of ill health. Abraham’s small size may have been an indicator of some malnutritional issues. Our team has worked hard to find Abraham the extra supplements that are helping him catch up to some of the other orangutans his age. In the last year our staff,veterinary and otherwise,have found that a mix of extra porridge, soy milk, and liquid protein in the form of VipAlbumin has been giving Abraham what he needs! 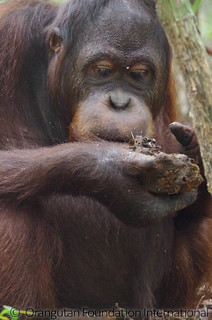 The proof is in the scales. Abraham has gained weight over the last six months. He has become bigger and stronger with an increased appetite. As always,he goes into the forest with Kent and Lady Gilbert. He can often be seen playing vigorously with them between bouts of foraging for termites , an excellent source of wild protein.

OFI’s special care team will continue to monitor Abraham’s improving development over the coming months. We look forward to the day when Abraham, Kent, and Lady Gilbert can return to the wild and live their lives together in the forest, should they choose.

Berman: Orangutan of the Month