Each year in honor of the establishment of Dr. Birute Mary Galdikas original research site Camp Leakey in 1971, OFI celebrates “Orangutan Awareness Week”. The main purpose of this week is to spread the word about orangutan conservation and deforestation through our outreach programs. These programs can include presentations, events, and most importantly education not only in North America but also in Indonesia. This year was no different. 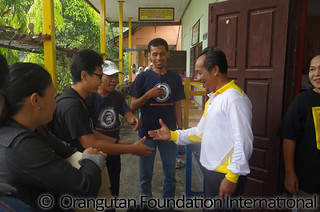 OFI has celebrated “Orangutan Awareness Week” during the first full week of November since 1996. Each year OFI holds different events to honor the occasion. This year OFI staff members were literally mopping up the smouldering embers of peatswamp forest fires in the region so OFI’s outreach efforts in Kalimantan were constrained. It was decided to concentrate on outreach to the local children affected by the fires. 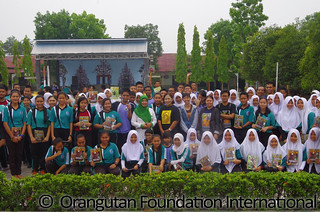 On Friday November 6, OFI representatives from the Orangutan Care Center and Quarantine(OCCQ) in Pasir Panjang, Central Kalimantan shared “Orangutan Awareness Week” with the local village Junior High and High schools. Although we have visited the schools before, it is the first time that our visit to the schools purposely coincided with “Orangutan Awareness Week.” Our Senior Management Mrs. Waliyati, Mr. Tumin, and Mrs. Sumi along with our Veterinary team Dr. Popo, Dr. Prima and Dr. Ketut represented OFI.

The day started early at the local Junior High school as we were greeted by the hosting English teacher. Inside were the smiling faces of over 80 students already awaiting our arrival.

After initial introductions and opening statements by the school and Mrs. Waliyati the students were introduced to the roots of “Orangutan Awareness
Week” and the work of OFI.

As the school is situated in the village of Pasir Panjang some of the students have family members who work for OFI. Many, however, come from other areas further away from the village and thus may never have even heard of OFI or really know much about orangutans.

After introductions came the highlight of the day: a screening of the Warner Brothers IMAX film Born to Be Wild. This film features the lifelong work of Dr. Birute Mary Galdikas in the establishment of OFI and the OCCQ as well as another conservation hero Dame Daphne Sheldrick who has pioneered elephant rehabilitation in Kenya Africa. 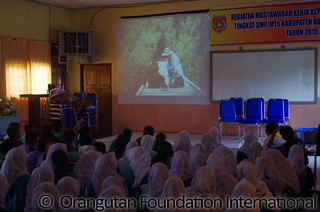 The students watched with glee the footage of orangutans playing in OFI’s OCCQ release playgrounds, situated less than a kilometer from their school, and of orphaned elephants playing soccer with their care givers much further away in Africa.

They especially liked to see the scenes of the orangutans drinking milk and swinging high in the trees. 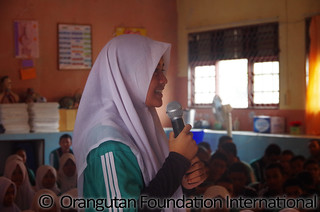 After the film the students were welcomed to ask questions of our staff. Many lined up to ask the veterinarians about the care of infant orangutans and about the rehabilitation process. These keen students were encouraged to ask questions in both the Indonesian and English languages. Those that asked questions were given OFI keychains to remember our visit. Most impressively one student asked about the effects of the recently extinguished forest fires on the orangutans in Tanjung Puting National Park. We reassured her that although there has been massive destruction of the forest our monitoring staff have yet to come across any orangutans injured by the fires in Tanjung Puting itself. This, however, is not the case in other burned forest areas. 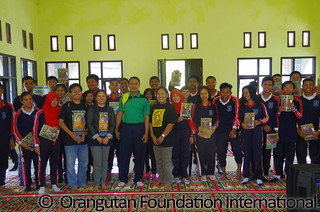 After the question period our representatives distributed OFI’s Indonesian language newsletter magazine “Pesan Dari Alam”. This magazine OFI creates approximately twice a year to share our work and successes with Indonesians. A group photo rounded out the visit and we were off to the High School next door to repeat our mission. Both Schools were exciting to visit and welcomed us to come back again. We will continue to spread awareness about the possible imminent extinction of the orangutan especially among the local people who live in the vicinity of orangutan habitat or even share it. OFI is already making plans for next year’s Indonesia based “Orangutan Awareness Week” events and everyone invovled are very much looking forward to it.

Waiter, there is a bird nest in my soup!