Albin is an orangutan after my own heart, one who possesses a very adventurous spirit. A self-assured young juvenile orangutan, he is beginning to showcase his independence. My first intimate interaction with Albin occurred one day during daily release. I was standing, observing when I suddenly felt a foot touch my shoulder. I looked up to see Albin hanging down from above, placing his foot onto my head in what appeared to be a tender motion. He climbed down lower and put his face level with mine, gazing into my eyes. Suddenly, I realised that he was actually trying to pull my hair out with his foot. Nothing tender about it! He might have a sweet face but Albin has a curious mind that demonstrates the complexity of orangutan thought. Since the initial encounter, I have grown fond of Albin and enjoy watching him make his way around the playground during daily releases. 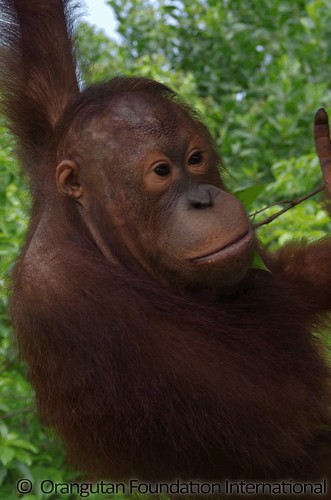 Albin still tries to pull my hair out again, especially if it is in a ponytail. Perhaps the hair pulling is his way of gaining my attention. If so, it works very well. I do pay attention to Albin whenever I visit the facility where he is released on a daily basis. Albin first arrived at Orangutan Foundation International’s (OFI) Orangutan Care Center and Quarantine (OCCQ) facilities as an infant under the age of one. In fact he arrived within the same year as his friend and playmate Piko did. These two forged a close bond after being orphaned at such a young age. Albin is friends with all the other male juvenile orangutans his age and doesn’t fight with anyone. A bit solitary, Albin is constantly looking for his next adventure, both inside the playground and out. Many times when I have observed Albin, he has suddenly taken off into the bushes followed by resounding cries of ‘BIN!’ (his nickname) as caregivers race to prevent him from going too far. This often seems to be a daily occurrence! During daily release, Albin and his five fellow male juvenile orangutans, Piko, Frans, Betelnut, Joel, and Yosuke will burst exuberantly into the playground. In the chaos, Albin takes his chance to head into the small trees and bushes next to the playground but is called back by caregivers. During Albin’s time in the playground he often attempts to elude his caregivers for a moment of solitude in the trees. Sharing sleeping quarters with five other juvenile males means he might be seeking some cherished time alone. 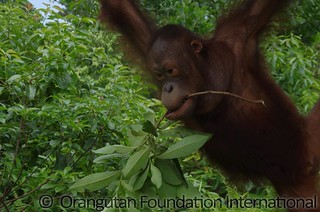 Following daily releases with any of the orphan orangutans is always special, but the juveniles really kick things up a notch. This is where you see a difference between the infants at play and the juveniles. The level of play becomes rougher, the power of their swings is stronger and higher. The juveniles begin to test the boundaries of their own strength and that of their caregivers. This is playtime: pre-teen edition!

Albin is certainly beginning to push the boundaries during his daily releases. In Albin’s mind he has outgrown the playground and wants to spend his time in the surrounding trees. All orangutans love foraging for leaves but Albin has turned it into an obsession! Unfortunately, there are only a few trees surrounding this particular playground. The trees are not large enough to take the weight of six juvenile orangutans. A champion schemer, Albin might appear to languish along the playground perimeter picking a leaf here and there. Yet the minute there is a lapse in his caregiver’s attention, you will hearrustling in the shrubbery as he dives headfirst into the bushes. Sitting perched atop a small tree he contently eats some wild fruit as his caregivers try to coax him down. Eventually he will come crashing down and return to the playground as noisily as he went . His mouth bulging with berries and his lips stained purple from commonly found fruit, Albin is now content to sit and munch on his foraged snack in the playground area. 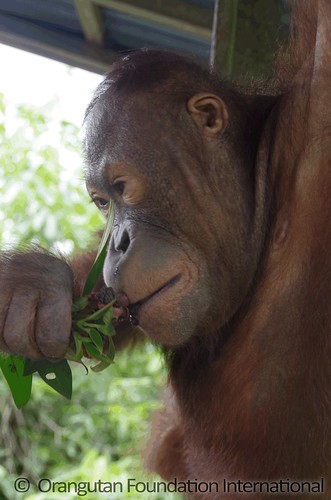 Albin has also begun to test himself physically in the playground. Last month Albin was swinging along quite gracefully from the playground’s rafters. Now, he is pushing himself faster and harder. In one instance, I was watching Albin on a thick rope “brachiating,” swinging himself arm over arm. Coming level with me he began to swing towards me vigorously, flinging his legs in my direction. Suddenly mid swing he let go and quite literally flew at me, missing me by centimeters. He landed in a flying roll onto a bush and then nonchalantly began munching leaves as though nothing had happened.
On occasions during his play time, Albin will reach an arm down to touch my head as he goes past, normally trying to pull my hair out of my ponytail as he does so. In his more boisterous moments, Albin will attempt to sneak up on me and pull something from my pocket as he dashes past. During one daily release, Albin was clearly tired of being photographed. As I rested he plotted. The moment he noticed my hand stray from my camera, woosh, he swooped in and tried to take it from me. A tugging competition ensued. I won, but just barely. The camera was in my hand. Albin returned to his high perch,gazing down at his lost prize, with soulful eyes.

As the heat of the day sets in, the six juvenile males begin to converge. In the shade of the playground they sit and wrestle, dig, and share leaves as a group. Within the group, even those who normally prefer to be solitary during play time, like Albin, appear to relish the social interaction. Frans is the chief forager of the group, going off into the bushes, returning time and time again with some tasty leaves. Albin immediately lays a claim to the leaves and rips them from Frans’ hands. Then Betelnut takes his share from Albin and Frans returns to the bushes to find some more leaves. It all seems to bein good fun.

As daily playtime comes to an end, the OFI caregivers have a difficult time convincing these juvenile orangutans to return to their sleeping enclosures. Who can blame them? Albin often gives a great chase before a treat is offered and he reluctantly returns to his sleeping enclosure, hitching a ride on his caregiver’s back. The day’s adventure might be over, but Albin knows that there is another adventure just around the corner tomorrow. In the years to come Albin will continue to grow and develop his forest skills. In the future, he will graduate from the juvenile playground to the larger OFI forest during daily release. Then one day he will graduate into the wild, free to explore to his heart’s content!

What Does it Take to Feed 330 Orangutans?