Mr. Tumin Luther is the manager of OFI’s Care Center and Quarantine (OCCQ) but he is so much more than that. Mr. Tumin’s dedication and spirit are the cornerstone of much of Orangutan Foundation International’s fieldwork in Indonesia. His influence and decision making are critical in all rescue and release operations. He is a small and humble man with boundless energy and a sharp wit. However, it is Mr. Tumin’s outstanding experience and his good-natured ways that have earned him the respect of OFI’s staff and management team members. 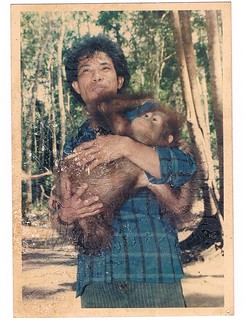 Most impressively, Mr. Tumin has been working for Dr. Galdikas and OFI in some capacity for almost his entire adult life. His incredible career in orangutan conservation started in 1979 as a research assistant at Dr. Galdikas’ Camp Leakey in Tanjung Puting National Park. He was then only 19 years old and had not yet completed high school but his obvious forest skills and quick understanding of orangutan and human behavior made it clear to Dr. Galdikas that he was a person with a bright future ahead of him. Having taken young Mr. Tumin informally as an “adopted” son, Dr. Galdikas then convinced the local school system to allow Mr. Tumin to finish his schooling and earn his high school diploma. 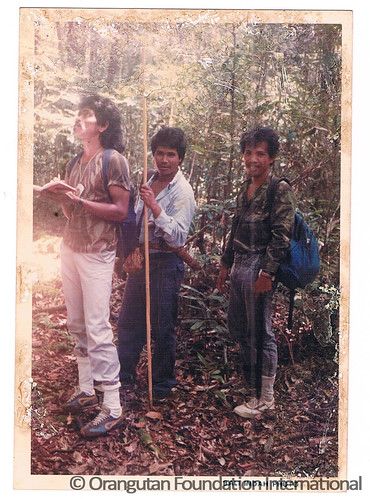 During this time period in the 1980s, Orangutan Foundation International was officially established. With increased support, the Foundation’s role in protecting Tanjung Puting National Park was able to expand to larger areas in the park. Patrol posts were built and regular patrolling increased, often with Dr. Galdikas in the lead as it had been since her early days in the park. Mr. Tumin also participated in these rolling patrols which took him to every corner of the national park and put him in touch with the most remote locations and national park staff. Walking daily through the forest, Mr. Tumin and patrol teams would often sleep out under the trees in hammocks or on tarps on the ground. They would often use small dugout canoes to quietly navigate small waterways. The patrols searched for illegal loggers and poachers, helping keep poaching, logging, and squatting to a minimum.

A strong bond was built between Mr. Tumin and other long term OFI staff members. Mr. Tumin is passionate about preservation of the forest. In the early part of this decade, Mr. Tumin took a strong leadership role as a Field Camp Manager in charge of all of OFI’s camps and patrol posts in the Park. The remoteness of some of OFI’s field camps and guard posts required building and maintaining roads and bridges, as well as maintaining boats, motorbikes, and communication equipment like radios and cell phone antennas in working order. Even now Mr. Tumin continues to oversee that field buildings and all equipment are rarely in disrepair. He continues to be intimately involved in all orangutan rescue operations that often require coordination with local forestry officials and police as well as our field staff on the ground.

Today, 37 years since he first joined Dr. Galdikas’ research and conservation work, Mr. Tumin is still intensely dedicated to saving orangutans and forest. His knowledge and understanding of the local people and forests has put him in a unique position to manage the OFI’s Care Center and Quarantine’s operations as well as being in charge of all guard posts and release camps. His understanding and devotion to protecting and saving orangutans coupled with a deep respect for Dr. Galdikas’ work is made obvious by his enthusiasm and energy in the field. 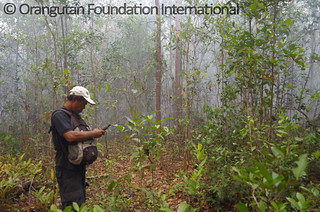 Every day Mr. Tumin is at the Care Center, often arriving before most of the staff. His routine organization of logistics, management of the movements and scheduling of both staff and orangutans (over 400 individuals together), as well as the frequent organization of rescue operations often has him working well into the night. His phone is never off. His communication and coordination with OCCQ staff is integral to all field activity. Mr. Tumin’s distinct laugh can be heard at all times of day. He never seems to never tire. His patience is exemplary. Dealing with so much would wear any extraordinary person down. However, Mr. Tumin has found a way to manage the OCCQ and field activity while keeping everyone laughing at his jokes and witticisms. The importance of his distinct, good-natured approach to crises cannot be underestimated in the stressful environment of Kalimantan.

These past few months have been especially difficult for OFI staff with fires raging throughout Kalimantan. During the fires Mr. Tumin, for four months straight, without a day off, rallied exhausted fire-fighting staff from the Care Center and other field camps to continue fighting the fires. Without the tireless efforts of Mr. Tumin and several other of his long term staff colleagues from the early days, the newer employees may not have found the energy to continue each day, putting themselves in danger to save the forest. Most suffered from smoke inhalation; at least one had to be hospitalized. 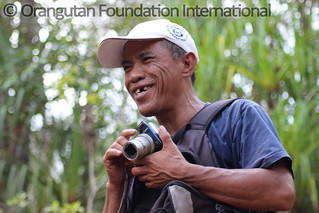 Mr. Tumin’s unique personality and deep sense of responsibility to the orangutans and the forest they inhabit make him an effective leader. His positive influence on newer staff is very important as we see these attributes growing within the younger generation of staff members. It is clear Mr. Tumin, as manager of the OCCQ, sees that his role is not only to put the care of the orangutans first but also to ensure staff are inspired and improve as employees and caregivers. A small example of this is that Mr. Tumin always includes himself in any rolling caregiving task for injured or sick orangutans. He can be found at the side of an ill orangutan changing bandages and staying up all night. This leading by example has had a huge influence. We all respect him for it.

It is impossible to know exactly how many orangutans and other animals Mr. Tumin has helped in his lifetime. A good guess would be hundreds. Mr. Tumin has, without doubt, become an orangutan expert of the highest caliber. His understanding of the forest, animals, and the people who live in the forest runs very deep. He is also a diplomat who can, with his wit and humor, negotiate with any local official or palm oil manager and leave them laughing. Mr. Tumin would never ask for acknowledgment but his years of service to the cause of orangutans and forest are truly extraordinary. OFI is fortunate to have him as a manager! He is indeed much more than just a manager. He is invaluable.

Orangutan of the Month: Tutut

Tommy: a little orphan with a big heart