The trees rustle and sway as juvenile orangutan Morrison swings gracefully through the Orangutan Foundation International’s Nursery Forest in Central Kalimantan (Indonesian Borneo). Here she loves to spend her days climbing and foraging in the forest. 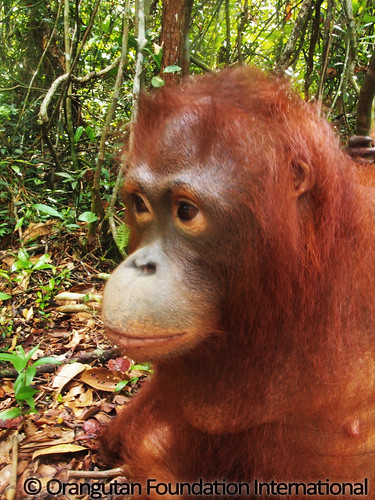 While in the canopy, Morrison takes her time to stop and eat some fruit or survey the forest below her from the tallest tree. As Morrison sat in the canopy gazing serenely down and around with a sense of contentment about her, I knew I wanted to observe her more and profile her for Orangutan of the Month. In any case, I feel fortunate to see Morrison on a daily basis. Each morning and afternoon before Morrison’s daily release I pass by her sleeping enclosure on my way to and from the Orangutan Care Center and Quarantine (OCCQ). Most days Morrison will greet me with her face sticking out inquisitively towards me and her hand reaching out to hold mine. Every time Morrison fixes me with one of her long, gentle, unblinking stares I often wonder what she is thinking about. When Morrison arrived at the OCCQ as an infant, there was little information detailing how she had become orphaned. Her mother was probably killed when the forest habitat they both lived in was cleared or logged. This is an all too common story for many of the orangutans who come to OFI. However, today as a juvenile, Morrison is thriving and loves being in the forest on her daily release. The graceful Morrison instantly charges off into the undergrowth when taken into the forest. She doesn’t hang around on the ground very long and wants to make the most of her time swinging in the trees. In fact, Morrison once took off so quickly that her caregivers lost track of her and needed five minutes to locate her in the canopy. She was finally located sitting at the very top of a tall tree quietly gazing down, as if wandering what all of the fuss was about. Watching Morrison “take off” quickly and cover a long distance in the trees on this occasion, I realized just how quickly orangutans can move if they want to do so. Yet watching Morrison climb in the trees, I am impressed by how elegant and graceful she is in her movements. 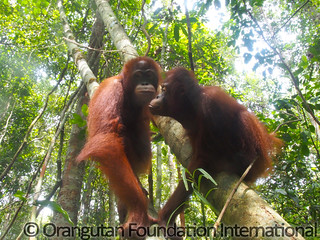 Morrison is friends with all the orangutans her age at the OCCQ but her best friend is Anna with whom she shares a sleeping enclosure. Not only do these two sweet juveniles curl up to sleep together each night, but also they are normally the first two orangutans to greet me each morning when I arrive at the OCCQ. Unlike her best friend Anna, Morrison seems much more calm and has a sense of tranquility and serenity about her. Her movements are slow and graceful and she never bangs on anything to get my attention like Anna does. Instead she will gaze at me with her big calm eyes and pouting mouth. She appears to be wise beyond her years. While best friend Anna will throw herself towards me, Morrison will move with purpose as she comes to rest beside me. Putting one arm out she will gently take my hand in hers. She will then start grooming my arm, something most orangutans do not normally do. Morrison always concentrates intently as she tries to pick moles off my arm. She isn’t trying to hurt me. She seems to think that the moles are dirt and she is trying to clean me!

Morrison loves to play with her friends when in the forest. Yet she and orangutan Glenda have somewhat of a ‘frenemy’ relationship. They are friends for the most part. Only when food is involved do these two quarrel. On one occasion Glenda came to sit next to Morrison and put her lips next to Morrison’s mouth to ask for food. Morrison refused to give her any, savoring the fruit she herself had found. Glenda then attempted to take Morrison’s food away from her. This led to the two having a small quarrel. It was nothing serious. It almost seemed that the two were only play fighting. Yet Morrison became angry that her friend was trying to take her food away. Her skin rose up in goose bumps. Her hair stood on end making her look bigger than she is! However, soon afterwards the two were friends again, playing in the trees and investigating old nests together. 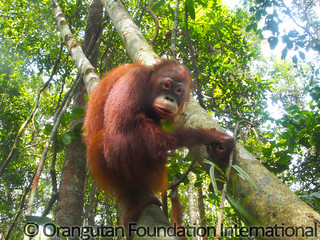 Morrison is now at an age where she is craving her freedom to stay in the forest as long as she wants. This is a good sign, although it can make it hard for her caregivers to return her to the sleeping enclosure at the end of the day. As the day progresses and the rest of her friends have returned to their sleeping enclosures, Morrison attempts to elude her caregiver. Trying to lure her back from the trees with fruit and soft calls of ‘Mori Mori’, the caregivers follow on the ground below her. Yet Morrison has found a way to outwit her caregivers. She will hang upside down by her legs from a tree and reach down to take the fruit offered to her. Before the caregivers can get a hold of her hands, Morrison will pop back up and sit in the tree again, munching away happily on her fruit treat. Eventually her caregivers win and tempt Morrison down from the trees. But the game always has to be played every evening before she will return to her sleeping enclosure. Morrison is hinting that she wants to stay in the forest a bit longer.

I personally can not wait for the day when Morrison does not have to return to her sleeping enclosure at the end of the day. After she is released to the wild, she will be free to roam the forest and sleep in any tree she wants. However, until that day comes, Morrison is developing her forest skills under the watchful eyes of her dedicated and loving caregivers.

Orangutan of the Month: Kino’s Journey

Employee of the Month: Dr Prima