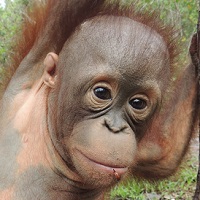 I am standing in the Orangutan Foundation International nursery forest trying to photograph Larry for ‘Orangutan of the Month’.

Larry thinks that this is a big game and with one hand holding onto a rope, keeps swinging at me trying to touch my camera with his other hand. If he could, he would be laughing at me. Suddenly he stops and stares intensely over my shoulder at something. His big eyes widen and his gaze fixes to one of childlike wonder. He is completely intrigued. I look behind me and only see trees in the forest. Yet something has captured little Larry’s attention and nothing is going to tear his gaze away. He is captivated by that one thing and he will not be distracted until he has finished looking. Then as suddenly as it began the spell is broken and little Larry launches himself at my camera again. What was he looking at? I don’t know. Sometimes it’s another animal whose camouflage does not reveal himself/herself to the human eye but whose movement catches the eye of an infant orangutan. Dr. Galdikas says it has happened many times before. 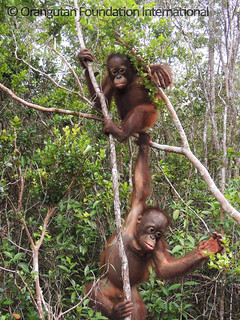 At two years of age Larry is one of the younger orphan orangutans at OFI’s Orangutan Care Centre and Quarantine (OCCQ) in Central Kalimantan, Indonesia. He is housed in a special infant care unit at the OCCQ where around-the-clock care is given to these small orangutans. Larry arrived at the OCCQ as an orphan at only four months of age. As with so many of the orangutan orphans, the story of how he came to be without his mother is not entirely clear but indicates his mother was killed in an area of forest being cleared for palm oil. Over the past months I have watched Larry grow from a scared infant with fuzzy orange hair, to an orangutan with a shining personality and one who is growing more independent every day.

As a baby orangutan, Larry is at that stage of development where he is exploring all the time. He wants to get into everything and to see everything. Larry has a thirst for adventure unlike any other and wants to constantly seek and discover. For little Larry, the world must be a very large place full of the unknown. Yet he still is only an infant and he doesn’t dare roam too far away from the safety of his caregivers. Occasionally, Larry will run back to them to cling onto a leg or to sit next to them on a wooden bench, simply to feel reassured. The caregivers in turn, will comfort him with a back rub or a gentle hug. Then, with his confidence restored, he will take off again to further explore, turning somersaults along the ground with reckless abandon. 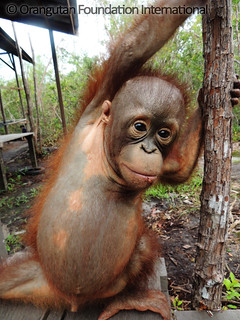 Each day Larry and friends are taken to the OFI nursery playground where they can climb, play, and learn to forage leaves from nearby trees. When he isn’t climbing, one of Larry’s favorite activities is playing in the dirt. He will sit himself down in the charcoal-grey dirt and start scraping and digging a small hole with his hands. Then, when he has enough loose dirt, he will start flinging it over himself indulging in a fun, jungle dirt-bath. Some days Larry is so covered in grey dirt that it can be hard to recognize him! After an interlude of dirt throwing, he will take off into the trees to forage. Larry is learning to find the all leaves and small locally growing fruits that he can eat. Around the nursery playground the trees don’t grow too high so Larry can easily locate a tasty snack in the lower branches. Sometimes he will get a little bit greedy and take too many fruits and leaves. Not wanting the fruit to go to waste, he will walk around with bulging cheeks and a green grin as fruit falls from his mouth.

As Larry is very young, he is still learning about climbing and how to judge suitable branches. On occasion, he will misjudge if a branch can hold his weight. Sometimes when playing in the lower branches of a small tree, Larry comes crashing down after jumping around on a branch and not realizing he broke it. Yet he dusts himself off, not hurt at all, and climbs up again to keep playing. I have learned from Larry that infant orangutans might seem small but, compared to human children, they are remarkably strong, both in their limbs and in their ability to take a tumble and keep playing. 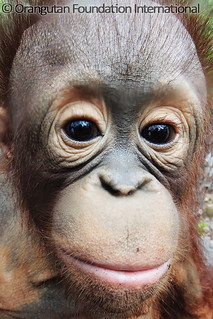 Larry is friends with all of the other infant orangutans around his age. When he is in the forest he especially loves to play with Vytas and Ben. These two friends provide good play-wrestling! Often I see Larry climbing into a tree with Vytas not far behind him. As night falls Larry curls up in one of the barrels in the sleeping enclosure he shares with the other infant orangutans. Here he will sleep soundly, feeling safe, with good friend Ray by his side. Together the two will curl up into a ball with arms around each other, replicating, to some extent, the feeling of security they would have felt curling up in a forest nest with their mothers. 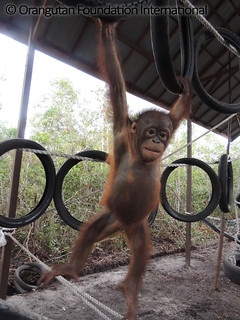 At two years of age, Larry is still an infant dependent upon his caregivers. It will be many years before Larry is confident enough and has the skills to be released permanently back into the wild. Yet little Larry is receiving the best of care. It is due to the love and affection of the OFI caregivers that Larry is able to learn and develop forest skills. We are eager to see this inquisitive explorer discover more and more about the forest and one day to see a not-so-little Larry free to discover new things in the wild.

Orangutan of the Month: Mohtar