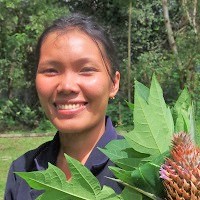 There is a shining presence at the Orangutan Care Centre and Quarantine (OCCQ) in Central Kalimantan, Indonesia when the beautiful and serene Ibu Jitun is around. She lights up the room wither her presence and always has a smile on her face. A kind and nurturing soul, Ibu Jitun is an exceptional person. She genuinely cares for all of the animals at the OCCQ. This includes the many cats & kittens left by villagers who know that OFI will not turn any stray animals away.

Ibu Jitun is only 24 years old, but she has a steady nature and seems wise beyond her years. She is gentle and attentive when interacting with orangutans and seems to always be smiling with a happy disposition. She helps with anything anyone needs, from washing the dishes in the kitchen to spending one-on-one time with the orangutans. All the orangutans seem to enjoy her gentle company. You can often hear her quietly singing to orangutans as she passes their sleeping enclosures in the late afternoon. She sings their name and often each one will come up to greet her. 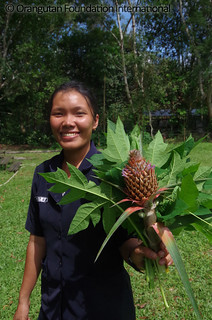 Ibu Jitun first started working for OFI eight years ago after she graduated from middle school. She wanted to get a job to help support her family. When she first began her work with OFI, Ibu Jitun was initially afraid of the orangutans. “I was scared that the baby orangutans would bite me!” she admits. Soon though, Ibu Jitun came to realize that the babies would not often bite her (and if they did, they didn’t bite hard!). In no time at all, she was falling in love with the orangutans. Initially Ibu Jitun worked with the smallest and most vulnerable orphaned orangutans at the OCCQ. Each night, staff sleeps overnight at the various facilities at the OCCQ to ensure around-the-clock care for the orangutans. Ibu Jitun’s first position was as an over-night caretaker for the infants. She said she would sleep with the smallest babies cradled in her arms, providing the physical and emotional protection these orphans craved. “I really liked working with the smallest infants. At night we would put a mosquito net over the baskets that the infants sleep in and I would sleep in the middle with all of them”. 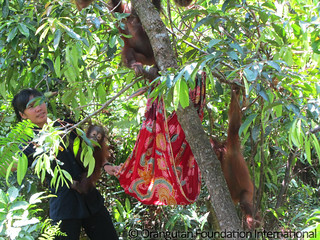 During the day she would take the infant orangutans into OFI’s nursery forest. The smallest infants would be placed into a small hammock tied between two trees where they could sit, observe, and interact with the older infants and learn about the forest. Ibu Jitun fondly remembers many of the orangutan orphans when they first arrived and tells me a few stories about them. Maggie was one of the first orangutans that Ibu Jitun looked after. Arriving at only a few months of age, Maggie was scared and formed a quick bond with her new surrogate mother. Ibu Jitun would sleep at night with Maggie curled up in her arms. These days, Maggie is a lively juvenile orangutan! Anna was another orangutan who was looked after by Ibu Jitun. When Anna first arrived she was very scared, especially of new people, but took a fondness to one of the cats that lived at the care center. Ibu Jitun laughs as she recounts a story of how tiny Anna would try to make the cat sleep with her each night, falling asleep hugging the very placid cat.Ibu Jitun is not originally from the village of Pasir Panjang but she moved there to start work with OFI. Her family are mostly Melayu, an ethnic group found mainly in the coastal regions of Borneo and other Indonesian islands as well as in mainland Malaysia. She tells me that one of her grandmothers is Dayak and that her family has been living in Kalimantan as long as anyone can remember. 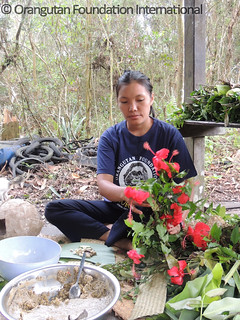 Ibu Jitun strikes me as one who is very comfortable in the forest. When I asked if she is scared of snakes, she just laughs and shakes her head as though it is a silly thing to suggest. I wondered if she spent a lot of time in the forest during her childhood, and she replied that her family often stayed in the forest which is why she feels so much at home there. Her parents grew rice and coconut trees in their family garden. Often on Saturday afternoon, once the half day of school was finished, her family would journey upriver in a motorized canoe to their garden in the forest and stay the night, returning late on Sunday night for school on Monday morning. Here, she learned about different plants as she walked in the forest with her father. At times, she encountered wild orangutans in the forest. Reminiscing on her childhood, she tells me a story that her grandmother had told her. It was a tale about a woman who meets a male orangutan in the forest and the two fall in love. They have a baby with its body half orangutan and half human! Orangutans were something Ibu Jitun knew about, in stories that her grandmother told her, and in her memories of walking the forest near her family’s garden. It is no wonder that she came to work for OFI! After starting work at the Orangutan Care Center, Ibu Jitun met her husband and they have since been married with two children, a girl and a boy. A month after having her youngest child, Ibu Jitun returned to work and spent the first six months with some of the older juvenile orangutans. She then transitioned to working as an assistant to Ibu Tuti, OFI’s gentle caregiver par excellence! Ibu Tuti specializes working with animals who are chronically ill or need extra love and care. Ibu Jitun would help to mix milk and electrolyte powders and go around with Ibu Tuti to give out medicine and spend some time with the OCCQ’s most vulnerable orangutans. 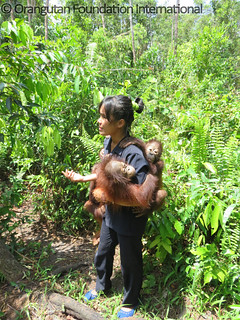 On more than one occasion as I have been walking along the wooden walkway through the OCCQ Nursery Forest, I have heard a rustling in the trees. Knowing that the orangutans should not be in the forest this early in the morning for their daily forest school, I stop and begin to wonder what this noise could be. It makes me slightly nervous, but I keep on walking. Suddenly to my left I hear ‘Morgan!’ and with a start I turn around to see a smiling Ibu Jitun materialize almost magically from between the closely growing trees. In her hands are bunches of leaves that she has collected to be made into enrichment items for the orangutans.

I ask Ibu Jitun what the future holds for her and she says she wants to keep working for OFI and supporting her children through school to get a good education. Ibu Jitun tells me that while she misses working with the infant orangutans she really enjoys her new job in the enrichment team. She loves seeing the orangutans she first looked after as small infants grow into juveniles who are not longer scared and shy and now swing with energy in the forest. Ibu Jitun’s face lights up with pride as she tells me that some of the first orangutans that she looked after when she arrived have been permanently released back into the wild. When I ask Ibu Jitun if she has a favorite orangutan she smiles and shakes her head. She can’t choose just one, she says, she loves them all. This perfectly sums up this wonderful young woman, unable to choose a favorite, but favored by all.

Orangutan of the Month: Dynamic Piko