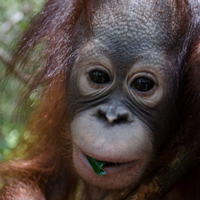 If grades were assigned in forest kindergarten, little Cory would certainly be top of her class. She is smart and also very driven, practicing and honing her forest survival skills every moment she is out in the Care Center’s rehabilitation forest.

But Cory Marder is not only smart, she is also very pretty with her long, shiny hair, beautiful face, and big eyes. In short, Cory Marder has it all! When asked about Cory, her caregivers mostly use two words to describe her: “cantik” and “pintar” – pretty and smart. (Want to see more photos and video footage of Cory enjoying time in the OFI Enrichment Forest? Click here.) When Cory Marder arrived at the Care Center more than a year ago, she was in a better condition than many of her peers are when they are handed over to OFI. Although her hair was relatively short, she was well nourished and looked healthy. She clearly was used to having contact with humans (she was probably sold as a pet after her mother was killed), and had no problems settling into the baby group at the Care Center. In the wild, orangutans her age are in constant contact with their mothers. At the Care Center, Cory sleeps in a basket filled with blankets and stuffed animals. The caregivers take turns caring for the babies so that day and night, there’s always someone around to feed them and to comfort them. Although Cory Marder seemed physically and mentally stable when she arrived, she very much depended on her caregivers. Like all orangutan babies, she needs body contact to feel secure. For Cory, giving a close hug is often enough to calm and reassure her that she isn’t alone.

Although Cory Marder is still very young, she has developed an amazing degree of independence. Whereas most of the other babies cling to their caregivers all day and are often too frightened to let go for even a short moment, Cory usually can’t wait to go out to the forest. Sometimes, when her caregivers are still busy gathering the other babies to carry them outside, Cory will climb under the roof of the building and then from there she’ll swing over into a tree. After peering down and confirming that her human and orangutan friends are also on their way, Cory will climb higher and then start moving from tree to tree. While the other babies spend most of their time on the forest floor, close to the safety of their caregivers’ arms, Cory enjoys exploring the trees so much that she rarely comes down. Although she likes to sample different leaves when she is up there, it seems that she already knows her favorites and will often return to the same spots to snack. Most of her time in the forest, however, is spent climbing, and it can be quite entertaining to watch her. Orangutan babies are very strong, so hanging down from a branch with one hand is no problem for little Cory. However, she is still learning to estimate which branches can support her weight and which ones can’t. Sometimes, a long branch will bend so much so that little Cory will touch the ground instead of swinging over to a neighboring tree. Sometimes the branch breaks and Cory falls to the ground. However, she does not seem to mind and immediately climbs up into the trees again! Even when she is taken to the playground together with the orangutan infants who are a little bit older, Cory maintains her fearless spirit. She will readily explore the climbing structures together with her older peers. Although she is very active and has much energy, Cory sometimes likes to rest, but usually only for a short time. One of her favorite resting places is a small hammock that the caregivers installed between two trees. Swinging back and forth, Cory looks quite relaxed while she monitors her surroundings.

After forest kindergarten is over, Cory is usually so thirsty (and probably exhausted from all the climbing!) that she gets impatient. She tries to steal milk bottles from the other babies if her caregivers are not fast enough to hand her one. In many ways, this behavior is quite typical of someone with Cory’s independent personality. Cory knows what she wants and needs. She will try to take care of her wants and needs all by herself. Cory Marder is a smart and cute orangutan baby, seemingly with no issues. Although she is still tiny and depends on her caregivers in many ways, her progress over the past year has been amazing. If her development continues in this positive way, Cory will grow up into a semi-solitary and independent orangutan, capable of surviving and roaming the rainforests of Borneo by herself only with her offspring, as her ancestors have done for millions of years.

Orangutan of the Month: Gistok