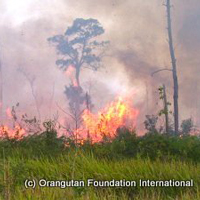 For the human and animal dwellers of Borneo, monsoons, droughts, and other extreme weather conditions are nothing new. The equatorial climate of this mega-island can be famously inhospitable. As such, Dr. Biruté Mary Galdikas and the entire OFI team of staff, researchers, and volunteers have become accustomed to working to protect orangutans under any and all conditions.

But in recent decades, the intense seasonal climate changes that make our work so challenging are getting more severe, unpredictable, and erratic, raising worries about the impacts on local ecosystems and wildlife.

Local people, especially if they live close to nature, notice changes in their world early and often comment on it. Since all of OFI’s staff are local Indonesians (most of them indigenous Dayaks) ‘weather’ is a frequent topic of conversation. While climatic changes in our region of coastalCentral Borneo(Kalimantan Tengah) seem to have become most pronounced in the last two decades, local assistants were already saying to the young Dr. Biruté in 1971 that the seasons were not as orderly as they used to be in the good old days. One of the most dramatic heralds of regional climate change has been the increase in forest fires. Normally, primary tropical rainforests do not experience many significant fires, mainly due to the humid soil, leafy wet vegetation, and surrounding humid air that typify these forests. Since historically fires did not often occur, many plant and animal species in Borneo forests are extremely vulnerable to fire, lacking resistant adaptations like the thick bark of northern trees or burrowing instincts of small mammals in North American forests. As such, the frequent catastrophic forest fires that now roar through Tanjung Puting and other forests in our region are extremely destructive.

There are probably several processes that might have made forests in Kalimantan go up in flames so much more readily in recent years than before. Most obviously, clearing much of the thick, moisture-retaining forest cover and draining peat swamps (via irrigation canals) for palm oil plantations dries out the soil and kills swamp trees with water-adapted roots. This causes trees to topple to the parched ground, dry out in the blazing sun, and act as kindling for stray sparks. Human activity is the most frequent cause of fires, either from ‘industrial’ burns to clear vast areas of wild lands for palm oil plantations, or from local people who slash-and-burn disputed lands in order to claim them for their own small plantations. While not as directly related, the dropping water tables in the area may also affect water availability, and thus fire patterns. Massive amounts of groundwater are drawn out of regional aquifers for palm oil plantation irrigation, as well as for domestic use for a growing population.

As noted by Dr Galdikas’ local assistants, the normal wet-dry seasonality of the area has also been severely interrupted and upended. Where the dry season used to begin around May and last until October, the seasonal change-over now has become highly unpredictable. Moreover, even in the midst of a season, abnormal weather events like a drought in the wet season or a flood in the dry season are becoming commonplace. This topsy-turvy seasonality is having some interesting effects. For example, among the fruit cultivated in the Dayaks’ home gardens, few are as beloved by the orangutans as rambutan. These juicy, sweet, lychee-like morsels typically ripen during the middle of the wet season, between January and March. But, in 2011, after the typical (and very abundant) rambutan season was winding down, people began to notice flowers and small green fruit on trees, or even branches, that had not yielded much during the usual ‘rambutan season.’ Within a few weeks, another massive rambutan fruiting was upon our region—a feast beyond imagine for both wild orangutans (who eat wild rambutan in the forest) and those in our care at the OFI Care Center!

We don’t know for certain what is causing these changes in timing and regularity of the wet and dry seasons here in Central Borneo. However, massive deforestation on a regional scale (such as that caused by palm oil plantations) has been shown to affect climate patterns in the Amazon rainforest [1,2]. This happens primarily through disrupting the movement of water between the forest’s vegetation and rainwater, by affecting (and usually increasing) air temperature, and by weakening the hydrological cycle, which is closely tied to seasonality. Another indicator of climate change comes from Dr Galdikas’ personal experience. She notes that “leeches have disappeared, even during the wet season,” an observation that has been echoed by many of Camp Leakey’s rangers. Dr. Galdikas has observed that during the wet seasons of the early 70s, she used to “get more leeches attaching to her feet in the first hour of walking in the forest than she gets from a full day in the forest today.” Since leeches, even dry land leeches like the species that live in Tanjung Puting, require wet conditions, the increasingly frequent dry, hot periods depress their populations. A possible reason may be El Nino events, which cause abnormal drought conditions throughout Borneo

Sadly, the ancient tropical forest systems that remained predictably consistent for thousands of years—supporting some of the world’s most complex and diverse ecosystems—are now faced with rapid-fire challenges to which they cannot adapt fast enough. And while we can’t fully explain the complex interactions between climate change and weather change, we know from Dr. Galdikas and students, associates, and local staff being on the ground and in the forest for more than four decades that these changes are accelerating faster than Mother Nature ever intended.

Surveying the Land: by foot, by boat, and by air