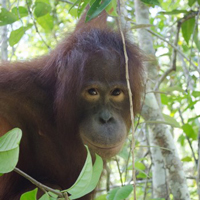 Most of the orangutans at the Orangutan Care Center & Quarantine (OCCQ) in Pasir Panjang, Kalimantan Tengah, Indonesia, have come into OFI’s care as a result of habitat destruction. Rainforest conversion to palm oil plantations, logging, and mining leads to fragmentation of the orangutan’s habitat, leaving orangutans with little choice but to enter plantations in search of food. Plantation workers often attempt to kill them. Orangutan mothers are especially vulnerable since they need to protect their offspring while running for their lives, frequently in terrain to which they are not well adapted. An orangutan can often escape a human in the forest, but on the ground a human will sometimes outrun an orangutan. Young orangutans who have probably seen their mothers killed in front of their eyes continue to arrive at the OCCQ. Despite their traumatic past experiences with humans, many of the orangutans grow up into confident individuals whose physical and emotional wounds have eventually healed. It still amazes me how gentle and friendly some of these orangutans can be towards humans, once they have learned to trust their caregivers at the OCCQ. One of these incredibly gentle and sweet orangutans is Cabang, whom I met during my first week of volunteering for OFI.

Cabang came into OFI’s care when she was still an infant. Today, she is still an adolescent as evident from the light-colored skin around her eyes and her playful nature. Cabang was brought in by a fisherman who had allegedly found her in the forest by herself. Given that orangutan mothers will never abandon their young, this seems highly unlikely. Like so many others, Cabang’s mother was probably killed and Cabang taken as a pet. At the Care Center, the little orangutan infant was named after the place she came from, a remote coastal village close to the border of Tanjung Puting National Park. In the Indonesian language, “cabang” means branch which is a fitting name for an orangutan with a deep-rooted love of the forest. This love of trees and forest is evident today. Every time Cabang is taken out for “jungle school” into the rehabilitation forest, she seems full of enthusiasm. When I join her for daily release into the forest, Cabang does not hesitate but immediately leaves the boardwalk and energetically climbs up high into the trees. She clearly enjoys her freedom, swinging vigorously from branch to branch so that it is difficult for me to keep up. We are in the swampy part of the forest, and the caregivers’ warnings about large pythons and cobras waiting for their next meal are many and not particularly encouraging. As always here at the OCCQ, everybody takes the daily challenges of life with good-natured humor, and so I head out into the swamp together with Cabang’s caregiver Pak Wiwin. Since Cabang likes to keep to herself, I won’t see the other orangutans again until we return to the sleeping enclosures in the afternoon.

It soon becomes clear that Cabang is headed to one of the outlying camps surrounding the OCCQ. Each camp is home to approximately 20 orangutans and consists of sleeping enclosures for the orangutans and basic facilities for staff. Cabang immediately heads towards one of the sleeping enclosures, but by offering her one of her favorite treats, we can convince her to return to the forest and continue exploring. Cabang is a good climber, and her movements through the forest seem effortless. Sometimes, she turns around to look for us as if to make sure that her human friends have not been lost! Eventually, she settles into a tree to enjoy a snack of young leaves. Once she has finished her meal, she takes a break from climbing and joins us on the forest floor. She seems to have decided that it is time for dessert after her meal of young leaves. She starts probing our pockets for the few peanuts we have there. As always, she is very gentle and never pulls frantically like some of her peers do once they have spotted food. She sits down to enjoy a few peanuts while gently resting her hand on my knee as if to reassure me she’s still there. Once she has finished eating, she starts to carefully pluck off some plant debris caught in the fabric of my pants. Cabang is not only very gentle, but also a very tidy orangutan!

When it is time to move on, Cabang seems a bit tired from her adventures in the forest. She climbs onto my back and wants to be carried for a little while. She clearly knows her own mind, as she holds on even more tightly whenever Pak Wiwin tries to remove her from me. After she rests for a while, she continues exploring the forest until it is time to return to her sleeping enclosure. With her pretty face and gentle personality, Cabang is undeniably likeable and a thriving individual. During her years at the OCCQ, she has developed from a frightened infant into a confident adolescent, thanks to the help and support of her dedicated caregivers. She still has more to learn before she can be permanently released but she is well on her way to becoming an independent, free orangutan, capable of living her ancestral lifestyle in the forest, and hopefully, bringing forth healthy orangutan infants into the world. However, during the time that Cabang has been at the OCCQ, the challenges and threats facing wild orangutan populations have become more numerous. Their habitat continues to be destroyed on a massive scale. Habitat loss and the resulting lack of suitable locations to release orangutans like Cabang is one of the largest challenges for wildlife conservation in Indonesia today. In rescue centers all over Kalimantan, orangutans that are ready to return to the wild rainforests are patiently waiting for their turn to be released. We are currently raising money to protect for the ‘Orangutan Legacy Forest‘ in order to increase the area of uninterrupted, safe forest for orangutans and other wildlife in the vicinity of the Care Center. Please consider donating to this cause to help enable Cabang and other orangutans undergoing rehabilitation to live wild once again.

To spend some time with Cabang at the OCCQ’s Rehabilitation Forest, watch this video. Orangutan of the Month: Unyuk