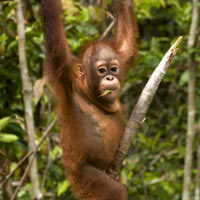 Doing conservation work can be exciting but also challenging and sometimes disheartening due to the hard odds arrayed against protecting habitat and animals in the wild.

As a volunteer and fundraiser for OFI, I am inspired by and find a source of strength from the many young orphan orangutans I work with at OFI’s Orangutan Care Center and Quarantine (OCCQ) in Central Indonesian Borneo. One of these orangutan orphans is Tommy who has the gorgeous face and kind personality of many orangutans I have known. There are so many things to say about Tommy, I don’t quite know where to start. Somewhat unusual for his young age, Tommy is quite anti-social when it comes to playing with other juvenile orangutans in the OCCQ. He usually walks off alone in the forest to climb and sit, eating leaves in the canopy. Sometimes he hangs upside down and falls… and then climbs up the tree to do it all over again. If there are other orangutans playing near him, he is happy to be close to them, but rarely does he join them.

Once he decides he has had enough fun in the forest, Tommy sometimes climbs into a caregiver’s lap and cuddles in tight, knowing how to make himself comfortable. He will just lie there enjoying his cuddle time. I am not sure how to describe the feelings I experience around Tommy, but I know that others feel it too. He has a calm vibe that just relaxes those around him. I know I love these cuddles just as much as he does.

Tommy is gentle and easygoing and it might seem that an orangutan with his soft, calm nature would get picked on by other youngsters, but young Tommy can hold his own. If other orangutans try to take his food, Tommy will fight them off. If there is anything Tommy likes more than cuddles, it is food! Whether it is the young leaves on the forest trees, or a piece of dropped corn from an earlier meal, or fruit he finds in the forest canopy, it is immediately ‘his’ and no one will succeed in taking it away from him.

His behavior is much the same when it comes to sleeping arrangements in the night enclosures. Three hammocks were installed in Tommy’s sleeping enclosure and right away he claimed his spot. Although he is more than happy to share, there is no way the other orangutans could ever succeed in kicking him out.

Given his solitary and somewhat possessive behavior, it might seem that Tommy doesn’t like other orangutans, but this kid actually has the biggest heart I have ever seen. One day I was watching the orangutans in their night enclosure and it was pouring rain. They have shelter so they won’t get wet, but most of the orangutans in this weather cuddle each other instinctively (the way they would in the drenching rainforest canopy with their mothers). On this day, Tommy’s best friend Charlie was looking cold and sad off by himself in the corner. I watched as Tommy walked up to him and hugged him tight to comfort Charlie and keep him warm. On another occasion, I watched as Tommy walked up to another roommate, Mabel, as she was crying in the night enclosure. He simply placed his hand on her shoulder until she calmed down. Watching his behavior and caring nature is one of the most beautiful things I have seen. I feel so blessed to know this little man because there seems to be something calming, caring, and soothing in his touch.

Tommy is also very intelligent and in tune with his fellow orangutan and human friends’ emotions. One morning, I was alone with Tommy and Charlie in the forest, and they were both having a cuddle between bouts of climbing in the trees. I was just resting against a tree and started quietly singing a song. At first I thought Tommy was just horsing around because he seemed to be playfully hitting me. Suddenly I realized he had started drumming one hand and then the other on my knee, in time with the song I was singing. I couldn’t believe he was doing this so I stopped singing. Tommy’s drumming also stopped. When I started singing again, some seconds later, he once again joined in with the beat. Not only was he drumming along, but he was in perfect time with the song! While you could interpret this as Tommy smacking me and trying to tell me to be quiet, it actually seemed he liked my song and was trying to join in. I like to think we have a little orange musician on our hands! In July of this year something exciting happened in the forest. Having a lazy morning, Tommy was sitting on my lap, but after about an hour he decided it was time to climb some trees. Expecting some of his usual upside-down games, I was completely blown away when I realized this clever little creature had climbed up into a tree and, sitting alone in the canopy, was making a nest from branches and leaves. This was such an exciting moment!

Nest making is an essential skill all orangutans need to survive in the wild. It is important to know they are confident in making sleeping (and resting) nests, because that means they will be spending their nights high in the trees, safely hidden from threats and predators. Many of our young orangutans enjoy making nests while out in “forest school,” but no one had seen Tommy do this before. I am so proud of this lovely youngster and so happy to have been there to witness such a big growing step for him.

Knowing that Tommy can forage for fruit, enjoys eating young leaves, and can now make a nest means that when he is large enough to return to the primary rain forest where he was born, he will have the skills to survive. I could not wish a better second chance for this little orphan with the outsized personality.