A smoky haze blankets the landscape for miles before we reach Rawa Kuno Forest. Off in the distance, great plumes of smoke can be seen emanating from the horizon.

At the base of each plume, orange flames reach up and produce the smoke that is being carried off into the sky. Once the sun goes down, an orange glow fills the air in the direction of each fire, creating an eerily apocalyptic scene. It’s a glimpse into the end of the world, seen from a place that was once untouched by humankind, but is now bleeding and scarred.

I am on my way to join OFI’s firefighters in Rawa Kuno, one of our protected forests that we’ve been working so hard to establish and protect. Fires have been raging for several weeks, and OFI staff from all of our stations have headed to join the fight, lending their hands to battling the flames.

The drive is long, and with plenty of time for reflection I can’t help but think about the state of the Earth, our only home. Along the way the view of rainforest is all too frequently interrupted by abandoned mining areas and vast expanses of palm oil plantation. I find myself thinking about the impending global climate changes, and resulting disasters that range from the tornadoes that rip through my home state, Nebraska, with increasing severity and frequency, to the wildfires raging all over the planet due to severe drought everywhere. I imagine what the world will look like as human populations continue to rise, and all the resulting pollution and garbage we create will accumulate. I picture a plastic bag already making its way down rivers and streams, headed to the ocean where some poor creature will mistake it for a jellyfish and possibly suffer an ugly death because of it. I think about the drilling and fracking operations that are poisoning our fresh water sources and spilling crude oil all over the planet, and about the tons of radioactive water leaking into the Pacific Ocean from the crippled nuclear power plant in Japan,. I could keep going, but I try to stop myself. I get the point. Earth is in a sad state of disrepair. All these thoughts are front and center in my mind as we make our way towards the smoke and flames.

I spend the day out in Rawa Kuno doing my best to help OFI staff battle the blaze which, thanks to their tireless effort, is now contained. After just one day at the fires I spend the next three days coughing and blowing black boogers out of my nose due to the heavy smoke I experienced (a charming sight, to be sure). By the end of the day I am soaked to the bone with sweat, dehydrated, and physically exhausted from clambering over fallen trees while dragging heavy fire hoses. Some of the staff has been out there, day in and day out, for weeks. I can only imagine their weariness, but you would never know it. They are still in good spirits, working as though they had only been at it for a few minutes and not a few weeks or more.

Aside from braving the smoke, the heat, and the other ever-present dangers in the forest, there is also the danger of falling trees. The fire gets down into the peat and destroys the roots. This makes the welcome wind a warning sign. After the wind comes up, a loud crack is heard, and then the unmistakable sound of a tree falling occurs. Or several trees, as they often fall in a large group. The staff only stop long enough to ensure that they are out of harm’s way, and then they get right back to work as though nothing has happened.

Fighting fires here is a logistical nightmare, but the ingenuity and perseverance of OFI staff is remarkable to behold. We don’t have dozens of helicopters to rain fire suppression from above, or teams of smoke jumpers and tanker trucks that we can parachute in. We have pumps, hoses, and human bodies, and that’s it. Even things like finding a water source is somewhat of a feat. Thankfully last year we had constructed a moat to form a physical boundary around Rawa Kuno. Our fire fighters are able to pump water from it even though the water level is very low. As they press on deeper into fire territory, they connect more and more hoses into one exceptionally long hose, and then with several men along the way they drag the hose towards the flames. This is repeated until the hose runs out, and then the pump has to be moved down the fire line. The men even let me try my hand at personing the end of the hose for a while (which is no easy feat), but I am glad for the opportunity to snuff out some of the flames myself. The satisfying hiss of a dying fire is about the best sound in the world when you’re surrounded by flames and smoke. 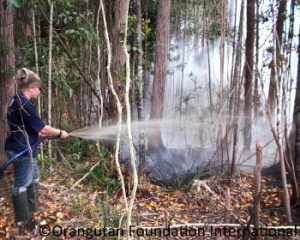 The passion and dedication of our staff is palpable. It is obvious that they aren’t just doing their job. They truly do not want to see the forest destroyed by the fire. They are all too aware of the issues at hand and just how precious the remaining forest here is. In addition to fighting the encroachment of palm oil plantations and mining operations, we are now also facing the daunting challenge of fighting forest fires with limited resources. There is little infrastructure in place at the local government level to extinguish forest fires, so we are basically left on our own in safeguarding the forest we own. The countless other fires raging in Borneo, however, will likely continue on unchecked unless stopped by the rain. The fires remain a real threat to local ecosystems. With every passing dry season the viable forest here shrinks just a little bit more due to fire. What we really need right now is rain, and lots of it!

The fires are primarily a result of human activity. Fires are often set to clear land and end up spreading out of control, or they are sometimes accidentally ignited when people burn their rubbish or carelessly toss away a lit cigarette. In addition to climate change making dry seasons longer and drier, palm oil plantations now established all over Borneo are lowering the water table with their irrigation ditches, drying out the peat layers over which forests sit. When you combine this with rising temperatures, decreased rainfall, and careless human activity you have the proverbial perfect tinderbox.

Were it not for human activity, fires here would be extremely rare. Unlike the temperate forests of North America, where trees like the lodge pole pine depend on occasional fires for reproduction, the fires here serve no particular purpose. They are purely destructive. Due to the thick layer of peat, which is an enormously important carbon storage system for the planet, the fires in Borneo release an extraordinary amount of CO2 into the environment. The emissions from a peat forest fire are much higher than a fire of comparable size in North America, where it’s usually just the trees and vegetation above ground burning.

Humans are the only creatures on the planet that are simultaneously smart enough and dumb enough to cause this level of damage to their own habitat. We are knowingly marching ourselves towards premature extinction, often making decisions every day that seemingly ensure this eventuality. We make these decisions in the form of the products we use, and the foods we eat, and the way in which we spend our money and conduct our lives.