When you see Ibu Maryanti at work at OFI’s Orangutan Care Center and Quarantine in Pasir Panjang, Kalimantan Tengah, Indonesia, you can sense her love for the orangutans. Her concern for the well being of the orangutan orphans in her care is reflected in everything she does. As OFI’s enrichment coordinator, her task is far from trivial: she strives to ensure that the more-than-300 orangutans that currently live at the care center are happy, stimulated, and entertained during times when they cannot leave their enclosures. 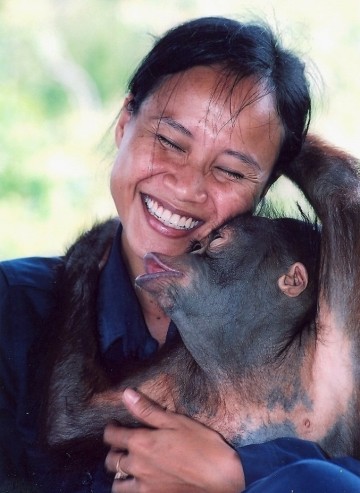 Although the orangutans are released into the forest as often as possible to allow them to hone and perfect their survival skills, such as searching for food and building nests in the trees, not all orangutans can be taken out every day. Above a certain age, orangutan males and females are not released at the same time anymore to prevent them from mating and producing baby orangutans who would further crowd the center, whose capacity is already at its limits. In addition, large male orangutans above a certain size cannot be taken to the forest, as they could easily hurt other orangutans or their caregivers. Although OFI aims to eventually release all orangutans in its care, the care center has become a long-term home to some of its residents (such as Montana) whose release will be carefully considered due to disabilities. Ibu Maryanti’s goal is to improve the quality of life for all orangutans in OFI’s care by providing enrichment that mentally and physically challenges them.

Ibu Maryanti is a local person. She grew up in Pasir Panjang, the Dayak village where OFI’s care center is located. Many people from Pasir Panjang work at the Care Center so orangutans have been a constant presence in her life from a very young age, which clearly laid the foundation for her deep understanding of the “people of the forest”. When she was only 16 years old, Ibu Maryanti decided that she wanted to work with orangutans while she continued her education. After discussing these plans with local villagers, Dr. Galdikas agreed to give it a try. For the next couple of years until she finished high school, Ibu Maryanti would head over to the Care Center every afternoon after school to help take care of infant orangutans. Given the challenges of working with babies – they often require lots of attention throughout the night – this is an impressive accomplishment that probably not many people in the western world would attempt to achieve! Although not all experiences with the orangutans were pleasant (one of the larger orangutans once bit her leg), Ibu Maryanti fell in love with the orange apes and up to this day works hard to make a difference in their lives. 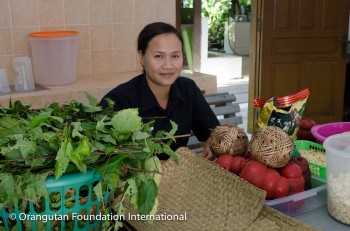 After finishing high school, Ibu Maryanti was fortunate to be able to study forestry education at the university in Palangka Raya (the capital of Kalimantan Tengah) with support from Dr. Galdikas. After completion of her dissertation, which examined the effects of different nutrients on the growth of the Sengon tree (a tree often used for reforestation), she worked at Camp Leakey’s information center in Tanjung Puting National Park for two years. At the time, she was the only woman working there. Visitors and locals alike sometimes found it hard to understand why she enjoyed living at this remote location so much. But for Ibu Maryanti, Camp Leakey remains one of her favorite places. “I think it’s weird that sometimes people can’t understand why I loved living there so much”, she says. “The fresh air, the diversity of the fauna and flora makes it such a wonderful place. I have very sweet memories of my time at Camp Leakey.” It was here that Ibu Maryanti met her husband, also a local from Pasir Panjang, who enjoys painting in his free time and who created an orangutan painting for the information center. After getting married, Ibu Maryanti returned to Pasir Panjang and started working at the Care Center again, this time in enrichment. “At the time, the idea of providing enrichment was new for me,” says Ibu Maryanti. “Before, we had taken all orangutans out to the forest every day from morning to evening, but with more and more orangutans coming in, this became ever more difficult. To ensure that the orangutans didn’t get bored in their sleeping enclosures and remained stimulated, we started providing different types of enrichment.”

Today, most sleeping enclosures at the Care Center are outfitted with permanent enrichment items such as half-barrels, ladders, and hammocks, which allow the orangutans to practice their climbing skills and to rest comfortably during the night. Many of these items have been installed by dedicated long-term volunteers, who help Ibu Maryanti keep up with the steady influx of orangutan orphans. Sadly, in recent years more orphan orangutans arrive than can be quickly released, making it necessary to build more and more enclosures to house the new arrivals. When installing new enrichment, Ibu Maryanti always has to strike the right balance between simple, durable pieces, and challenging items that will keep the orangutans entertained but which might be more fragile. Even after careful reasoning, the staff at the Center are sometimes in for a surprise: when new barrels were first installed, the orangutans loved them so much and kept making so much noise “testing” their new equipment that the staff had a hard time sleeping during the night. 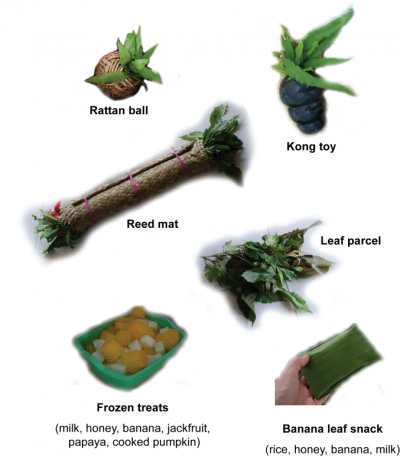 The main focus of Ibu Maryanti’s work, however, is to provide a variety of enrichment objects that enable the orangutans to display their natural behavior, and that challenge them mentally. An important part of the enrichment program is to give out branches at the end of the day to allow the orangutans to sample different leaves and to construct nests even if they can’t go to the forest. Another important component of her work is food enrichment. When preparing food-related enrichment, Ibu Maryanti prefers to use natural materials such as leaves, bark and flowers. Leaf parcels that contain peanuts, raisins, pumpkin seeds, and popcorn are her favorite. After the treats are consumed, the orangutans often eat the leaves, play with them, or use them to improve their nests. Alternatively, Ibu Maryanti sometimes hides the treats in locally produced rattan balls or she wraps them in reed mats, for which the orangutans have also found a variety of uses. Kongs, dog toys that can be filled with different food items, are also used to increase variety but require that the orangutans are more closely monitored, at least initially: “Some of them will chew on the Kongs and then swallow pieces of the plastic, so I always try to find out first which orangutans tend to do that, and then give only natural materials to those individuals,” says Ibu Maryanti. 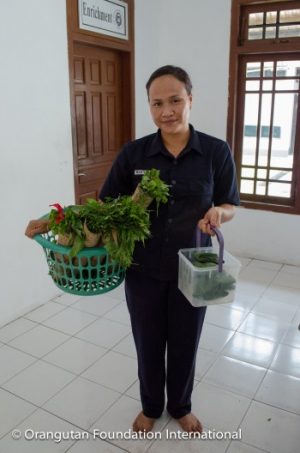 Ibu Maryanti on her way to the orangutans to hand out reed mat “burritos” and banana leaf snacks.

One of the big challenges for Ibu Maryanti is to provide adequate enrichment for all 300 orangutans given limited financial resources. In addition, the logistics of obtaining fresh branches every day can be difficult, and producing hand-made enrichment items is a time-consuming process. By visiting different facilities (the camps that surround the OCCQ and house different age-groups of orangutans) every day, Ibu Maryanti ensures that all orangutans receive equal treatment. However, she does have her favorites: Ziko, who has now been released, always used to hug her when she came, and she developed a very close relationship with him over the years. He also was always very gentle with the enrichment items. When he was given a rattan ball, he gently poked it to create a small hole just large enough to extract the snacks hidden inside, instead of frantically pulling on the fibers as some of his peers do.

Over the years, Ibu Maryanti has seen many orangutans come and go. The infants she helped raise when she first started working for OFI have all been permanently released, something that makes her very proud and proves that the hard work required to raise and rehabilitate orangutan orphans eventually pays off and enables them to live in the forest where they belong.