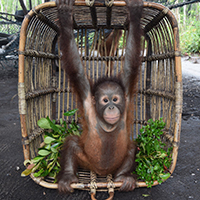 Male orangutan infants are lightning bolts packed with energy and if there is one orangutan who can be guaranteed to be in the thick of it, that is Levy. Some infants immediately stand out. Levy is not initially as obvious or as eye catching as some of the other infants at Camp Danielle but over a short while you can’t fail to notice him. His features accentuate the light circles around his deep dark eyes. Those eyes look straight through you paradoxically full of both  innocence and bravado. Levy is still one of the younger and smaller infants at our facilities but he dreams big. He exudes a quiet confidence and his willingness to give anything a try make him admirable. This little orangutan’s winning personality is evident in interactions with his peers and the environment around him.

His caregivers both love him and are frustrated by him in equal measure. As soon as he bounds out of his sleeping enclosure, his natural curiosity takes hold. Cats are ubiquitous around Indonesia where they hold a special status. It is no different at the Orangutan Care Center and Quarantine (OCCQ). Every “camp” or building seems to have at least one cat that has taken up residence. Recently the cat at Camp Danielle bore two kittens. One kitten decided to strike out on his/her own just as Levy was coming out of his sleeping enclosure. He went straight over to inspect this strange little creature. He didn’t touch or bother the kitten; he just wanted to have a good look. Levy is a keen student and aspires to know all that he can about everything in his environment but that didn’t stop his caregivers chasing him off. This was fine with him as he decided that climbing the water tower was probably more fun in any case. This necessitated someone climbing up to shoo him away from the top of the water tower and over to the playground and the forest – the things that are actually “designed” for him to play on. Knowing he was not supposed to be on top of the water tower Levy dashed away to the playground. He is equally happy ensconced in the playground as he is scrambling around the forest.

Summer 2019 brought some major changes to Camp Danielle. Around the immediate vicinity of the camp the forest is a little degraded. Wanting to make better use of the space and to accommodate the 20 insatiable infants’ exuberant play needs, a second playground was planned and built just behind the first. This provided plenty of opportunities for the infants to play, climb, and tire themselves out. Levy wasted no time in getting involved. Even before the new playground was finished he would scout over to investigate as if urging the “slow” humans to hurry up and get it ready. Once the new playground was completed Levy made sure to test everything out and ensure it was up to his standards. Barrels, tire swings, ropes, and beams had been strung across the structure. Judging from his enthusiastic play Levy seemed to approve of this new installation.

Levy is not backward about coming forward. He fancies himself as a ladies man and regularly follows some of the orangutan girls around. He can be seen chasing orangutan Holland around the playground or sidling up next to Amelia as she hangs from the rafters. They are not always receptive to his advances but, unlike some of his male peers, he is quite good at reading social cues. He pushes his luck but Levy will step aside if he is not getting anywhere. He doesn’t have a mean spirited bone in his body. Never one to let rejection bring him down, he will find something new to engage with. For instance, a rainy day provides a mud bath to roll around in and he covers himself with mud from head to toe. His caregivers may despair but in these situations Levy can rely on his male peers, such as his enclosure mates Otan and Lucky, who still find playing with the mud embalmed Levy an attractive proposition. Otan is a particularly close friend as both were brought together at the same time to the OCCQ by the KSDA (a branch of the Indonesian Forestry Department). Both orangutan infants were very young and fragile just a mere few years back but now they act as though they are invincible.

Levy doesn’t limit himself by sticking just to his own crowd. He has a list of playmates as long as his arms.  He moves within many circles and often hangs out with the older and bigger infants and juveniles. Their size doesn’t intimidate Levy. Perhaps he looks up to them and is trying to learn everything he can from them. One he enjoys spending time with is Sparky, a gentle soul who, in turn, follows Levy around. Once they were both at the top of trees that were about six feet apart. Sparky was swinging and reaching out to Levy but couldn’t quite reach him. Levy was doing the same but he was also just out of reach. Proving their adaptability, the two decided to co-ordinate and work as a team and meet in the middle. Levy grabbed onto Sparky who pulled him over to his tree and they were finally on the same branch, perching together like two large orange birds!

Levy is open and friendly to all. There have been instances where orangutans from other facilities at the OCCQ have made their way over to the Camp Danielle playground. The Pondoks and forests are all interconnected by paths and trails, some so faint that only an experienced forest dweller would recognize their presence. But they are there. Levy will use them for quick access. Levy enjoys playing with some of the bigger orangutans like females Brittany or Caca (pronounced ChaCha) from Pondok Cempedak. He seems quite keen, especially on Caca. He buries his head into her side and tries to use his weight to make her roll over, without success. Caca sits calmly next to Levy, slightly bemused, but allows him to continue trying. Levy doesn’t know the meaning of the term “slow down.” Youngsters are always trying to grow up too fast after all.

Levy has his life voyage ahead of him. His easy going nature and his ability to adapt to any situation will stand him in good stead when he eventually returns to the wild. Levy’s can-do attitude is a shining example to us all. It wouldn’t be so bad if we were all a bit more like him.