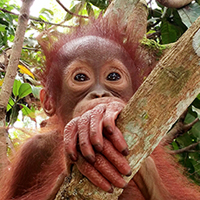 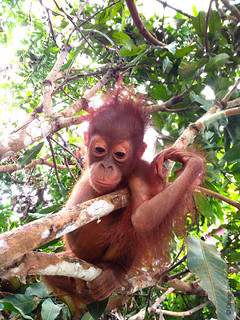 On a hot afternoon during the rainy season, a vehicle slowly pulled up in the driveway of OFI’s Orangutan Care Center and Quarantine (OCCQ) in Central Indonesian Borneo. The van was soon recognized to be a patrol vehicle of the Sampit Wildlife Department of Indonesia. An officer opened up the car to reveal two little orange balls, infants, one of which was Otan. The overwhelmed babies took in their surroundings, experiencing the light, sounds, and smells of life at the Care Center for the first time. OFI was giving these two infants a new chance at life, after they had tragically lost their mothers and spent much of their young lives as pets.

Upon arrival, Otan was slightly underweight but didn’t show any signs of further physical injury. After the two orangutan infants were placed into Quarantine, it became clear that Otan had been through some traumatising experiences. Otan’s primary caregiver in Quarantine, noted “Otan was extremely shy when he arrived at Quarantine. He would barely move when he saw humans and tried to be ‘invisible’, rolling himself up into a little ball in the corner of his enclosure.” Luckily for Otan, he was in the right hands. His caregivers gave him all the time he needed to adjust to their presence and his new surroundings. They even left a light on for Otan at night, because he was afraid of the dark, loudly crying when he woke up in the darkness after what seemed to be intense nightmares. 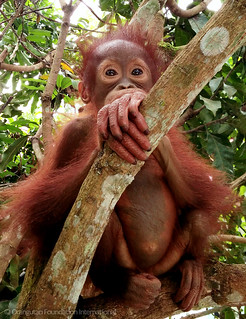 After two weeks, Otan’s fear of humans greatly dissipated, and his appetite increased proportionality. Otan loves his milk. He would still wake up in the middle of the night, but instead of screaming because of a nightmare, it was now for milk! Otan gained strength every day, and it was soon time for his next challenge. Accompanied by his equally thriving buddy who had arrived with him, Otan left on his first release to conquer the trees of the Learning Forest. Otan first watched his friend climb, and then quickly followed suit. Once Otan’s feet left the forest floor, he was unstoppable. Up in the canopy of the young trees, he swung around at the tips of the branches. But this did not all go flawlessly for the first-timer. After a few successful swings, Otan grabbed a branch that was a bit too thin to hold his weight. The branch broke and Otan slid down, landing on the leaf-covered forest floor. Little Otan briefly looked surprised at his miscalculation, but did not hesitate for long before climbing way back up into the trees. 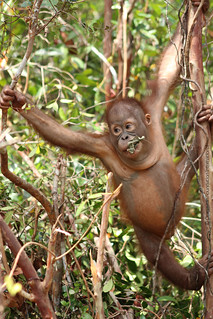 Forest school offers young orangutans the chance to learn by trial and error: how to swing from one point to another, which leaves taste delicious and which taste horrible, and which insects are good sources of protein versus those better to avoid. When Otan tasted a young mango leaf for the first time, he showed visible enthusiasm for this delicious food. Inspecting the leaf close-up, smelling, and rubbing it into his hands, he was teaching himself how to recognize the tasty discovery in the future.

Otan also likes to snack on termites. The first time he found a termite nest, he was unsure what to do with it. He carefully gave it a push, then took a step back to see if anything would happen. Something did happen: more termites came out!

One of Otan’s buddies appeared on the scene and did not hesitate to put a few termites in his mouth. Otan waited carefully to observe his friend’s reaction. When it was clear that Levi was really enjoying the little insects, Otan didn’t want to miss out. Putting his first termite into his mouth and carefully smashing it with his muscular lips, a new favorite forest snack was found!

After a month in Quarantine, Otan was ready to move to Pondok Danielle, the ‘nursery’ of the Care Center. He was now one of the smallest orangutans of the class, although he had certainly grown in size and personality since his arrival into OFI’s care. He became fast friends with his peers, and even stood up to some of the larger infants who were testing him. Although he still had moments of being a bit frightened, he was unrecognizable from the terrified little orange ‘ball’ that had arrived a month ago.

Today, Otan is a healthy and energetic little orangutan thanks to the life-saving efforts of OFI. He is one of the first orangutans to wake up, screaming for milk and ready to leave his sleeping enclosure for forest school. On his daily release, Otan spends most of his time playing and ‘playfighting’ with his peers. The infant who arrived with Otan remains a close friend. As these two have been through so much together, it is truly touching to observe the comfort they still give one another.

It is because of the long-established practices and know-how of OFI that Otan has been given a second chance at the life he was born to live. OFI has put hope into action by healing the trauma of orphaned orangutans like Otan, and preparing them to eventually conquer the rainforest on their own.

Orangutan of the Month: Ari

Orangutan of the Month: Bali