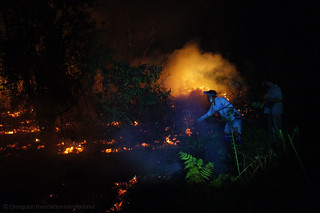 In 2015, deliberately lit fires raged across the Indonesian islands of Kalimantan and Sumatra. As the fires grew increasingly out of control and smoke hung heavy and thick over the region, the Indonesian government declared six provinces in the archipelago to be under a state of emergency. One of the six provinces was Central Kalimantan, home to Orangutan Foundation International. OFI staff sprang into action the moment the fires were ignited near our land. Dedicated team members spent four gruelling months, day and night, fighting the forest fires which had already destroyed thousands of hectares of rainforest. Staff desperately fought to save the Orangutan Legacy Forest (OLF), an area of primary and secondary rainforest that has gradually been purchased, parcel-by-parcel, and protected by OFI. Sadly, large areas of the OLF were burned. Were it not for the courage and dedication shown by OFI staff, much more of this precious forest would have been lost.

It might surprise you to learn that OFI is still fighting the fires of 2015 today. The flames that burnt bright orange high into the night sky are now extinguished. The smoke that hung heavy over Indonesia and caused many humans and animals to fall ill has dissipated. The charred remains of burnt trees are already being covered with quick-growing green weeds. Though the flames and smoke are long gone, OFI is still fighting these fires. At the OCCQ, the orphaned orangutans who swelled the ranks of the new arrivals after the 2015 fires are still in the earliest phases of the rehabilitation process and adjusting to their new lives without their mothers. Outside the OCCQ, the field staff are still working to protect the remaining trees in the Orangutan Legacy Forest that escaped the flames of 2015.

In the aftermath of the fires, we could finally assess the extent of the damage. With the aid of a drone, OFI was able to capture heartbreaking images of just how much forest was lost. From the ground, the devastation was stark. Only from the air could we finally catch a bird’s eye view of just how little forest remained. Prior to the fires, the rainforest in Kalimantan was already disappearing at an alarming rate as more forest is cleared every day to make way for palm oil plantations. Even before the 2015 fires, orangutans were losing their homes and the OCCQ was filled with hundreds of orphans destined for a second chance at living free. Even before the fires, the world could not afford to lose more rainforest in Indonesia.

In response to the fires, OFI prepared a determined plan of action for the forest. While purchasing land and instituting patrols had saved much of the forest, OFI now needed to bring back what had been lost, before there was nothing left. The OFI Reforestation Project was launched in December 2015 with the belief that we could succeed, and that we had to. Dr Galdikas symbolically passed the first handful of seeds to the newly formed Reforestation Team. From there, the momentum for the project grew and a nursery was established at the OFI Herbarium. Over the next year, the team worked hard to build and maintain the nursery, collect and propagate seeds and seedlings from the nearby remaining forest, and to monitor and patrol the Orangutan Legacy Forest area. That year was one of recovery and catch-up from the hard months of suspending ongoing projects to fight the fires. In 2016, initial planting began. Then, to ensure maximum learning from this pilot, as well as survival of the trees planted, Dr Galdikas and the Reforestation Team selected April 2017 to launch the full-scale reforestation planting.

Several factors present challenges to the Reforestation Project. Planting must be planned around the seasonal weather cycles, which have become more and more difficult to predict each year with the changing global climate. Rain no longer arrives and leaves at known times. Despite the rainfall not following an easy pattern, we know that seedlings need to be planted at the beginning or end of the rainy season, to give them the best chance of survival. They cannot survive the drought-like conditions of the hot, dry months when no rain falls. And if planted in the middle of the wet season, the seedlings are at risk of drowning in the swamp environment created by the persistent, hard rain. The OFI Reforestation Team was hopeful that by the end of April, the rains would have soaked the soils for a few months, and be only a month or two away from ending.

An additional complication, OFI’s reforestation area has been heavily degraded in several ways. The peat swamp has already been drained and burnt many times through the heavy agricultural usage surrounding it. Then, the 2015 fires were so severe that both the top layer of soil and deep layers of peat were burnt. This leaded to limited natural regeneration, because the natural seed bank (the dormant or freshly deposited seeds in the top layer of soil) had been destroyed. A key aspect to the Reforestation Project is data collection and establishing best methods for reforestation in these damaged peat swamp soils.

Rainforests are intricate ecosystems that are challenging to reconstruct. The area being reforested would take millennia to return to its previous, mature state. Careful planning is required, starting with the layers of tree species to be planted. The first species must be strong, quick-growing, sun-loving plants. Without the shade provided by these trees, the slower-growing, shade-tolerant seedlings wouldn’t survive the harsh rays of the tropical sun. Once a canopy has begun to form, more seedlings can be planted in the shade of the sun-loving pioneer species. Additionally, planting a high level of fruiting trees will attract birds, insects, and small mammals to the area to act as natural seed disperses and aid in reforestation.

Despite the challenges we faced, the OFI pilot planting season of 2017 was a success. Over 5,000 seedlings were planted into the peat, and now thriving. The nursey is filling up again with seedlings in preparation for the next planting season to follow the end of the dry season, about the end of this year. Launching the Reforestation Project is just the beginning of a very long journey. Tropical peatland forest restoration is not a quick process. It will take a minimum of ten years to establish the base layer of pioneer and secondary succession tree species. The long-term dedication required can seem staggering. But the Reforestation Team, OFI, and Dr Galdikas are all committed to seeing this project through to the end result of a rainforest standing before our eyes once again.

As the first seedlings send their roots deep down into the soil and their leaves reach toward the sky, the OFI Reforestation Team looks to the future. Spanning ten years (at the very least), our goal of reforestation is far on the horizon. But for Dr. Galdikas and staff, there is little other choice. We would rather see a rainforest slowly rise up, one that can support wild orangutans again, than a future with no rainforests at all.

The peat swamp forests of Kalimantan are not only home to the critically endangered Bornean Orangutan, but they also hold vital stores of carbon that must be prevented from being released into the atmosphere. To some, the forest fires of 2015 might seem a distant memory, but for OFI, the image is still sharp in all of our minds. From little seedlings, big forests grow. OFI is dedicated to seeing these seedlings become the giants of the forest they are destined to be.

Rusti settling in at new sanctuary in Hawaii!