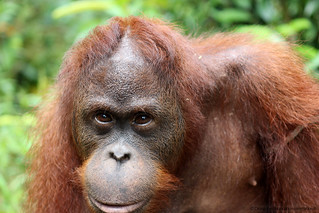 On a warm morning in Central Indonesian Borneo, the caregivers of Orangutan Foundation International (OFI) prepare to escort the orangutans from Pondok Satu into the Learning Forest at the Orangutan Care Center and Quarantine (OCCQ). Pondok (which means “shelter”) Satu is currently managed by an all-female team who care for both female and male orangutans, including our Orangutan of the Month, Ariel. 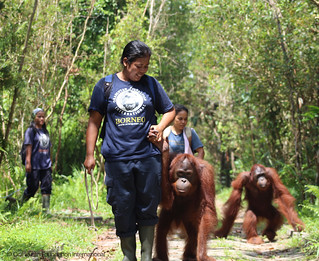 Caregiver Ibu Ena reaches out her hand to Ariel as he steps out of his sleeping enclosure. As she ushers Ariel outside into forest school, his beautiful features catch the sunlight. His eyes and symmetrical face are accented with a little orange beard on his chin.

Ariel arrived at the Care Center when he was just 2 years old. He saw his mother killed in a palm oil plantation and then was kept illegally as a pet. Alone and afraid, little Ariel had a long road back to recovery. Unfortunately, Ariel’s story is not uncommon. In human-orangutan encounters, protective orangutan mothers are frequently killed. The infants who are clinging tightly to their mother’s bodies, are forcibly ripped off. This traumatizing moment is only the beginning of the horrific experience for infants who frequently end up being sold into the illegal pet trade.

The man who came into possession of Ariel might not have had bad intentions, but he did not know how to properly care for an orangutan. He provided Ariel with milk, but kept him indoors at all times. For a year, Ariel -a wild born orangutan- did not see, touch, smell, or taste anthing related to his forest origins. Luckily, Ariel was eventually discovered and confiscated by officials of the Forestry Wildlife Department. They brought him into the safekeeping of OFI and his loving caregivers. 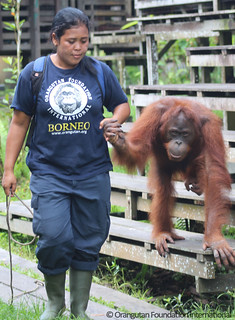 These days, Ariel has come to trust some humans. Reaching out gently for a caregiver’s hand, he trusts his caregivers to bring him into his beloved forest, where he can make up for all the time he spent indoors as a pet. Walking through the forest, this healthy male is nothing like the tiny, insecure orangutan he was at his arrival to the Care Center. His strength and extraordinary personality shine. 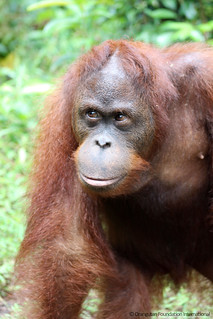 Ariel is very aware of his surroundings. When he encounters an object in his path, he pauses to pick it up and investigate. Holding up the line of orangutans behind him, Ibu Ena reminds Ariel to keep on moving. Once he reaches the Learning Forest, Ariel’s wandering nature really reveals itself. A true explorer, he covers a lot of ground during daily releases. While other orangutans might rush to specific plants to eat, or trees to climb, Ariel has his own daily adventure in mind. Confidently moving through the low vegetation, he screens the area as if on the lookout for something new and interesting, seeming to follow a strict plan of his own making. Sometimes he climbs up a tree for better vantage, and then changes his direction, eventually finding “the spot” where he can continue his investigations.

His next step is to collect all the right tools. He gathers a variety of sticks and branches next to “the spot” and afterwards begins his investigation. Ariel’s favorite technique of research? Digging! Collecting and piling clumps of soil along the way, his digging operations form an enchanting pattern in the earth. As the clumps accumulate, he sometimes tries to balance some on the top of his head, all the while still digging. His focus is such that the staff have come to wonder if he might uncover a wonderful treasure some day! For now, he continues to pull up clumps of soil, sticks, and other earthen objects, which are surely treasures in his eyes.

Independent explorer that he is, Ariel seems to enjoy the solitary time he has in his own little world. Whereas some of his peers spend more time wrestling or chasing one another, Ariel exhibits the maturing behaviour of his semi-solitary species. As a dedicated seeker of treasure, he keeps his eye on the prize! 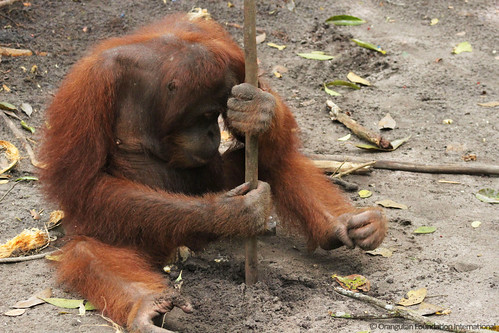 After an hour or so of digging and conducting his “research,” Ariel leaves “the spot” and quickly makes his way up into the forest canopy. High up, he confidently swings from a tiny tree until he has gathered enough momentum to reach the next branch. In a few minutes, he is 100 meters from his starting point. One day, he will be much farther into his freedom, the day when his daily release into the Learning Forest becomes a lifelong release into his real home, the rain forest. With your support, we can continue to help him reach that goal, freedom in a safe and protected rain forest.