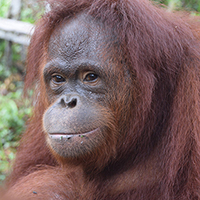 It is amazing to think that just over 50 years ago we knew so much less about these orange apes, orangutans, the only great apes native to Asia, than we do now. Over the last decades Dr. Biruté Mary Galdikas and others have contributed much to our knowledge of these enigmatic pongids. Through observation and research we have gathered much information about the energetic requirements of these magnificent animals. For instance, as she sits amidst the tree tops orangutans like Marsha may look “lazy” but they’re just incredibly energy efficient. That may sound like an excuse but it’s the truth. The tropical rain forest looks as though it is full of abundant and luscious fruit but often the forest is stingy with what it provides in terms of plant food. Competition is stiff and plants arm themselves with toxins and thorns. Slow metabolisms and low energy requirements along with much resting and slow movement in the canopy mean it’s possible for orangutans, the largest arboreal animals in the world, to hang around the canopy and survive, especially when food is seasonally scarce in the wild.

Marsha has a round, pleasant, open and honest face. Her hair shines and her eyes dazzle. It has been some years since Dr. Galdikas found Marsha as a small orphan, dressed in rags, in an isolated Dayak village and persuaded her indigenous owners to give her up. Marsha’s mother had been killed and eaten.  At the time Marsha was described as a “cute baby with a big belly.” Looking at her you may be inclined to say not much has changed. As a baby Marsha was easily startled by sudden moves and loud noises. It took her some time to adapt to life with OFI (Orangutan Foundation International). At the Orangutan Care Center and Quarantine (OCCQ) Marsha enjoyed drinking milk but as she grew she suffered from bouts of fever. Indonesians say if a baby is feverish it means that he/she is growing and so the fever is a natural part of the process. It wasn’t an easy first few years for Marsha. She also suffered many attacks of diarrhoea but she remained an active infant. By the time she was 6 years old Marsha had grown into a healthy juvenile.

Now residing at Pondok Satu, the adolescent orangutan facility, Marsha has gorgeous flowing hair. Some of the other orangutans have been known to playfully pull it. Marsha’s caregivers are careful to watch out for this as we don’t want Marsha to lose any of her hair. Although Marsha herself is not the most playful orangutan, she keeps herself occupied, and is very meditative. She does seem happy and content in a gentle, modest way. But every time someone passes her sleeping enclosure, her watchful eyes follow. She springs to life when enrichment parcels filled with leaves and vitamin gummies are passed out. The vitamin gummies are quickly devoured but she isn’t finished with her parcel, indulging in her sense of fun, as she places the leaves on her head like a hat.

On forest release Marsha enjoys rolling around the forest canopy, swaying from one branch to the next. She is a relatively big girl now. As the branches give way underneath her weight, she nimbly moves to another one for support. She is a very tactile orangutan and enjoys pulling everything towards her especially if it is green. Her mouth, full of green foliage, usually resembles a salad bowl and the forest is her unlimited buffet. She lets her caregivers hand her leaves for inspection. Young leaves are a regular feature of the salad in her mouth.

She also picks up any small logs or stray bits of wood from the ground running the length of it along her nose seeing if there are any ants lurking within. She follows her salad with a refreshing drink. Marsha enters the swampier areas of the forest and promptly wets her face in the dark water. She sloshes it about with her hands and enjoys a little shower while she’s at it. Marsha is fascinated by the bubbles and ripples generated by her disturbance of the still water in the swamp puddle. She sometimes contemplates the movement of the water for a long time.

Marsha can sit for hours gazing around the forest. Orangutans forage in the morning but as the midday heat begins to blanket the forest, they often slow down to have something akin to an afternoon siesta.  At this time they make day nests to lounge in. As Marsha makes her day nest, she pulls branches over herself, keeping the larger strong ones with many leaves and tossing away the lesser, small ones. Marsha really has a feel for the forest and she fits in like a piece in a jigsaw puzzle. After some serene time surveying and beholding her surroundings, Marsha is off again, travelling through the canopy, stopping for brief periods, examining items of interest, and then moving off again. It’s as if she is committing every square inch of the forest canopy to memory.

Marsha also enjoys her forest time with friends Tiido and Krista. She is happy to go along for the ride with them and be in on what’s happening. Atop the trees these female orangutans can be seen wrestling in between bouts of eating wild fruit. Marsha follows Tiido around  and watches what her friend Tiido eats. Marsha will then soon move in to sample this fruit for herself. In this case, Marsha seems to be a student who peers over the shoulder of her peer looking for answers. This isn’t necessarily always a bad thing. However, Tiido can be a bit of a bad influence on Marsha as the two of them together journey right to the outskirts of the forest.  When together, Marsha and Tiido always seem to want to push their boundaries as far as they can.

On a rainy day Marsha doesn’t want to come down from the canopy, especially if she has made a cozy nest. She often makes the most out of her days out, refusing to come home to her sleeping enclosure until the last possible moment. As orangutans get older they are much more wilful and confident. Marsha has grown quite a bit since she was that “cute baby with a big belly.” Noises and sudden movements no longer spook Marsha. She has learnt how to look after herself through her own observations and conducting her own “research” when out in the Learning Forest.

We too continue to learn more and more each year about orangutans. Fifty years of observation has brought us many scientific facts and much scientific understanding but when out in the forest, as we watch Marsha all this scientific knowledge melts away. Quantifiable data like weight, height in the canopy, type of locomotion all have their place but seeing an orangutan making her way satin smooth, peacefully, and gracefully in slow fluid motion in the tree tops is magical. It holds an intrinsic quality all its own. We are privileged to witness the magic. As we watch in appreciation and awe, we realize that we must conserve and protect this magic. Otherwise, we are betraying Marsha and all the wonderful, gentle members of her endangered species.