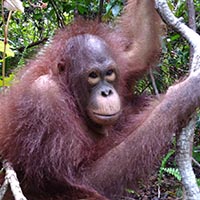 Orangutan hair may be a flaming dusky red but it provides excellent camouflage when orangutans are in tangled shrubbery and in the forest canopy where the sun doesn’t shine.  Like ninjas orangutans blend in seamlessly into the forest especially as they often hold themselves absolutely still.  Wild born ex-captive “Summer” is perfecting her stealthy ways. As her peers crash around the forest she dangles patiently. She is a tough nut to crack but when she is given space to indulge her wants, Summer comes alive.  It’s not for nothing that she carries a certain reputation among her caregivers.

Summer arrived at the Orangutan Care Center and Quarantine (OCCQ), quite ironically given her name, in December. She arrived sneezing, coughing, and dehydrated. The details around her captivity soon came to light. The man who brought her in, Pak Kamto, had heard about someone having a pet orangutan at a Dayak village. Dayaks, the indigenous people of Borneo, historically have kept orangutans as pets. Even as awareness of their plight grows in some of the remote regions of Borneo, orangutans are still often seen as prized possessions. Pak Kamto investigated further and found an approximately 3 year old orangutan being kept in one of the village homes. Her “owner” said that while he had been hunting in the forest with his dogs he had come across an orangutan mother and her infant. The dogs had chased the mother away and she had left her infant behind.

To regular readers of our OFI website, this is an all too familiar tale. Each time we have to take a grain of salt with these tales as orangutan mothers generally would not abandon their child, especially since most infants are carried as the mother moves from tree to tree until the offspring reaches 5 years of age. Either way that day Summer became an orphan. She was taken back to a house and given a totally unnatural diet of krupuk (crackers), sugary snacks, and water. Pak Kamto paid 300,000 rupiah (around 20 dollars) to take this little orphan orangutan and within a week he brought her to the OCCQ.  Immediately Summer was given food much more in line with her natural diet including fruit and milk which she hungrily lapped up.

Fast forward to the present day and Summer has proven that she doesn’t lack a wild spirit. The orangutans at Pondok Dua, the juvenile orangutan camp, are released to the forest in the morning. By the late afternoon a steady stream of people and orangutans filter back to the Pondok. Some days calls still echo around the forest as caregivers call down their charges from the trees and the keen eyed observer would begin to notice only people, not orangutans, going back and forth on the ground. Summer once again is the last one out in the forest. She only comes back when she decides.

Summer is an independent orangutan. What one notices immediately about her is how driven she is. She doesn’t sit idly but always finds something to occupy herself with. If  Summer has a goal in mind she sees it through. One thing that she doesn’t appreciate is interruption and she doesn’t suffer fools gladly. As she swings among the trees, fellow male orangutan Abel approaches her and enters her comfort zone. Summer does not like this and the telltale signs of an unhappy, stressed orangutan start to appear. Goosebumps show on Summer’s dark skin and she shakes branches signaling Abel to steer clear. She rains down her frustration in a torrent of loose leaves. However, Abel pushes his luck and gets up close to an already displeased Summer. He reaches his arms out to her but she is not interested. Here Summer wastes no time in showing him she means business. She swings herself full force towards him and Abel flees. This isn’t enough and she actively pursues him across the forest. Abel scrambles away but Summer doesn’t give up the pursuit until he has learned his lesson. Abel climbs far away out of reach and reconsiders his life choices. A satisfied Summer gives up on the chase and returns to her own peregrinations. Conversely, orangutans that she is more familiar with such as the perennially active Maue Kay or cuddly Santa Claus are allowed to interact closely with her. She will happily play fight and wrestle with them. They have moved up the ranks together and so share more of a connection. They also know when Summer wants to be alone and don’t crowd her. Perhaps Abel may be more mindful in the future.

Summer’s caregivers are quick to point out that she is top of the class in nest making skills. A careful collection of branches, twigs, and leaves in the canopy shows her craftsmanship. In the Learning Forest nests can be seen anywhere from 15- 100 feet high up in the trees. Summer chooses the middle ground, usually constructing her nest around 40 feet above the ground. Like other orangutans Summer enjoys her creature comforts. A nice big nest with plenty of leaves for bedding provides an ideal spot to relax in.  As previously mentioned, Summer is always the last to return from a release – sometimes this can mean the following day. Making a nest and staying overnight in the Learning Forest is no big deal for her. Her caregivers’ pride at her nest making skills is mingled with a touch of anxiety as they face the prospect of not making it back to camp before dark. But this is what the caregivers have signed up for and they are ready to do what needs to be done.

After climbing and staying up high in the canopy, Summer seems to ignore the calls of her caregivers. They seem to fade into the background as she focuses her energies on the task at hand. She lays back on a tree branch and scratches herself. Red ants have started crawling around and on to her causing some irritation. The unsuspecting ants then get caught in her flowing hair and soon she is picking them out and happily snacking. Up in the trees Summer is in her element and nothing else matters to her at these moments. This is where she belongs; her eyes light up and a look of contentment splashes itself all over her face. She sees no need to come down; after all, 90% of her food is found in the canopy so why would she? One can’t help but root for her.

Today her caregivers can relax as Summer decides she will come back from the Learning Forest after all. She climbs down and slides lazily on to one of her caregiver’s backs, allowing the caregivers to do the work from here on in. The look of contentment remains on her face as the day draws to a close. Like the season itself Summer burns bright with a fiery passion that could scorch you with the heat of the sun, but handled just right offers a pleasing and affectionate warmth.

Orangutan of the Month – Hughie