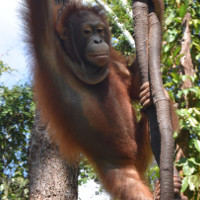 The hanging vines and sturdy trees in Orangutan Foundation International’s (OFI) Learning Forest in Central Kalimantan (Indonesian Borneo) have borne witness to many young orangutans over the years. The vines have weathered rough swinging, times of peace and times of organized chaos as caregivers and orangutans bustle back and forth through the forest. The vines and trees are open and accepting to all who pass through. Here orangutan Banda can find a safe area to play and express himself.

This safe forest is unlike the place from which he was rescued in 2015. During the massive forest fires of 2015 vast swathes of the Bornean rainforest were lost. Many species and communities were affected by the raging fires. In the devastation alone young and frightened orphaned orangutan was found and brought to the Orangutan Care Center and Quarantine (OCCQ). What happened to his mother is something that we will never know.

Fast forward several years and now Banda is a growing orangutan with a big appetite, namely for food and play. En route to forest school, his caregivers have been known to swap him around as he is quite the weight to carry. As soon as they reach the playground he hops off their backs and makes his own way. He lags behind the other orangutans refusing to be one of the herd and takes the scenic route through the forest adjacent to the path, weaving in among the ferns.

Banda is recognizable from the pale white skin on his chest which young orangutans sport under their orange hair. He also has what can be described as a “turkey neck.” His big neck could be a sign of what may develop into an impressive throat pouch that adult males inflate to make their long calls. These long calls carry for up to one or two kilometers into the forest. Banda’s caregivers attempt to call as far so he knows where to find them but this doesn’t stop him journeying further into the forest.

Banda is definitely the most dominant in his group and he knows it. The dynamics of juveniles are interesting to observe especially as young Banda discovers himself. He spends most of his time ensuring that other orangutans his age respect his authority. Smaller orangutans such as Pippit are at the bottom of the pecking order and have to acquiesce to Banda if he is nearby. Sometimes Banda’s focus is so much on ensuring his authority he forgets to embark on practicing skills such as nest making. But Banda is not malicious or mean. A glance usually suffices to indicate his position in the group’s dominance structure. His charisma is enough. Peers, Bobble, Ray, Aluh and others, who are of almost equal size and similar age are allowed to go about their business. Banda will play and wrestle with them at his leisure.

In his sleeping enclosure, Banda will engage with his peers but out in the forest, he makes the most of his time there alone. As far as his caregivers go, he only shows interest if he hears a bag rustle as a hint that some food is on offer. He can be seen surreptitiously peering around from behind a tree before springing into action, quick as a flash if food is available. During feeding time Banda’s caregivers have to make sure all four of his “hands” are occupied gripping fruit so that everyone else is assured of an equal share. Banda isn’t picky and eats just about anything he is offered.

The forest vines are an excellent multi-purpose tool for Banda. He seems to find a new use for them every time he is out. They are an excellent seat, excellent swing, excellent for hanging by one foot and excellent for grabbing things. Banda chooses his spots well so he can maximize what he can grab and pull towards him. He can be seen pulling old leaves towards him. Banda inspects the leaves but as they crumble to nothing in his hand, he tosses them away in dissatisfaction. Banda focuses on the living forest and not the old. The memories of 2015 drift away with these old leaves.

In the present Banda attempts to test out his romantic skills. Female orangutan Dodot finds herself in the crosshairs. At the top of a tree, he sidles up next to her. She has always been a favorite amongst the male orangutans at their facility named Pondok Dua and Banda has also fallen under her spell. It’s just a light romance although they sit closely together for a while. But soon Dodot moves off, her mind on other things. At one point three other orangutans vie for space on the vine that Banda is occupying. They are below him. He slides down and crashes into them. This is his vine and he is on top of it. He might be alone at the top but he isn’t lonely.

Banda sets his sights higher and climbs the tallest trees. Branches fall in his wake as he drops them from up high. He now has eyes for something else, his other desire, food. This time it takes the form of an enormous hanging bee nest. The honey here is sweet but there is a bitter side as he has to endure stings from the bees in order to get his reward. The bees get caught in his hair, providing a source of irritation, but it all seems to be worthwhile for Banda. Unlike many other orangutans his age, he doesn’t squeal or cry. He is a strong charismatic male who doesn’t much show his emotions.

Banda cuts an aloof figure as he sits brooding and observing his surroundings. He attempts to act tough. He is keeping his distance, a loner with no time for shenanigans but this is somewhat undermined when the vine he picks to move onto falls apart and he comes crashing down to the ground. Dusting himself off he attempts to regain his composure but the spell is broken. If Ray or Bobble enter the scene now, he will allow himself to be dragged into a wrestling match. It seems that Banda is coming to the realization that sometimes the tough guy act doesn’t impress anyone much.

Banda still has much to learn about the forest and himself. He is still discovering what sort of orangutan he is going to be as he tests out different approaches and sees what suits him best. Once he gets posturing out of his system as he gets older, he will learn to focus and channel his energy more on skills such as nest making. He will certainly be one to watch out for in the coming years. He will make sure that once you’ve met him, you won’t forget him.