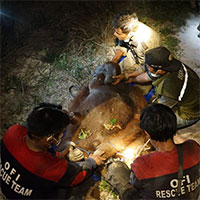 From June until October 2019 OFI staff were once again called upon to fight fierce fires that threatened orangutan habitat, national forests, OFI facilities and release sites. Wildfires such as these ravage primary forest, orangutan habitat, and reduce it to smoke and ash.

With so little forest left for orangutans and other native animal species, these fires push wildlife to the forest edge, trap them in islands of burned forest or force them to travel through plantations to seek safety, increasing the risk of animal-human conflict. Indonesian forests have some of the world’s most biodiverse ecosystems. These unique and precious ecosystems are currently under threat from the increasing intensity and regularity of wildfires.

Wildfires have, unfortunately, become the “new normal” as climate change driven conditions increase both the frequency and intensity of fires.  Many of these fires are started due to slash and burn techniques used to clear land for agriculture and to establish not only horticultural plots for traditional people but also to establish industrial plantations. These fires often quickly burn out of control because of decreased rainfall and prolonged drought, devastating forests and the wildlife that thrive within.

Orangutans and other Indonesian wildlife face threats to their existence daily. With the added challenge of having to flee their native habitats to escape forest fires, the chances of orangutan and other wildlife survival diminishes even further.

During this year’s wildfires, OFI Staff were called upon to rescue an orangutan that became trapped in the middle of a burned forest near Pangkalan Bun. Thankfully, OFI’s Rescue Team was able to respond and rescue this adult flanged male dubbed “Ash” and take him to the Orangutan Care Center and Quarantine (OCCQ) to treat for possible smoke and other fire related issues before release.

Although the fires spread quickly in Central Kalimantan this year, OFI staff were better prepared after experiencing the devastating fire season of 2015 when approximately 20,000 hectares (almost 50,000 acres) of forest were burned in the vicinity of Tanjung Puting National Park.

In 2019 OFI response teams were able fight the fires so that, in comparison with 2015, only several thousand hectares of forest were demolished in the vicinity. The takeaway after the last few years is that these fires are the “new normal”. OFI must be constantly prepared because it is almost certain that soon there will be more fires.

OFI has made the effort to connect with the brave, professional firefighters in California who regularly fight devastating wildfires throughout the state.  Their response times save countless lives and property and they have expressed a willingness to advise and train OFI staff.  Additionally, OFI will need to increase patrols for fire watch and hire an additional 50 temporary staff during fire season.  Preparation for the upcoming fire season will also require the purchase of fire protection and suppression equipment, water tanks, and response vehicles. In 2019 OFI hired 30 additional local men on a temporary basis. Without their help, it would have been impossible to successfully contain the fires much as we were able to do. We also purchased a small off-road “tractor” for hauling supplies into the peat swamp forests where the fires were the worst.

With the impacts of climate change worsening each year, it is no longer a matter of if fires will affect these forests next year, it is a matter of when.  As a dedicated supporter, we ask for your assistance so OFI can employ fire suppression techniques and respond efficiently to ensure these fires have minimal impact. Borneo’s cherished great apes need and deserve a brighter future than the one facing them now. Help us safeguard the forests so orangutans like “Ash” won’t have to face the trauma of fleeing a fire ravaged home. We need to be prepared. The future of orangutans is in our hands!

With your help, OFI can be prepared to fight wildfires and save orangutans and forests from destruction.

Please support OFI in a chance to win up to $250K.