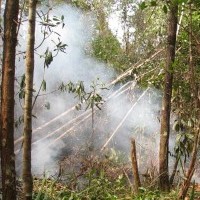 You are standing in the midst of destruction. Felled, charred trees litter the smoldering ground below you. The dead leaves crunch under your feet with each cautious step and the heat presses on your skin and fills your lungs. Fires pop up unexpectedly all around you, and a threatened rainforest is behind you. You are not trained as a fire fighter, but this is your fire to fight.

Just a month ago, Orangutan Foundation International (OFI) staff in Borneo were met with this very situation as fires blazed at the edge of the Rawa Kuno Legacy Forest, a tract of mixed type rainforest that we have been trying to secure for the past year. When forest fires start, as they do now almost every year in Borneo, they cause extensive environmental and social damage, and pose a particular threat to endangered orangutans.

In the middle of the 20th century, Borneo was still an island dominated by ancient, pristine rainforests. Traditional Dayak farming methods had left the forests almost entirely intact for centuries. But in the 1980s and 1990s Borneo underwent a drastic transition as industrialized nations became interested in its forest resources. Forests were felled at a rate far surpassing the deforestation rate in any other place in the world at any other point in human history. The demand for timber, palm oil, paper pulp, rubber, and minerals meant that the homes of a huge diversity of plant and animal life – as well as of indigenous people – were degraded or destroyed.

Virgin (or “primary”) rainforest is not usually vulnerable to forest fires. But where trees have been felled, secondary forest and bush takes its place – vegetation that is much more prone to drying out, and thus burning easily in drought conditions. Today, fires are set regularly by people in agricultural areas and in degraded forests by commercial developers for large-scale forest conversion (particularly for palm oil plantations). Once fires start, they can easily run out of control and spread to adjacent forests.

When fire starts on already degraded land, in today’s increasingly prevalent dry conditions due to global climate change (spurred by activities such as deforestation), and in land under poor management, a chain reaction begins. More and more rainforest burns. In 1997/1998, over 6 million hectares of forest in Borneo went up in flames.

Over twenty million hectares of Borneo’s forests – including the forest of Rawa Kuno – is peat swamp forest, or peatland. Peat is the organic matter (e.g. leaves or wood) that covers the forest floor and remains only partially decomposed due to the waterlogged and acidic conditions found in these forests. Peat deposits can go several meters deep into the forest floor, taking up to 20,000 years to form. When peat swamp forests are drained for agriculture, these massive amounts of material dry out and become tinder for blazing fires. Peat burns at very high temperatures. Because peat goes so deep, it can burn unseen underground, starting in one place, and then unexpectedly cropping up as an aboveground forest fire at some distant location. Thus, wildfires in peat swamp forest are very dangerous. These fires can smolder for years under the ground. One estimate claims that one square meter of burning peat can take up to 200 to 300 liters of water to extinguish. Because peat deposits take thousands of years to form, peat swamp forests, once burned, are not easily renewed.

These regular fires leave a smoky haze hovering over the areas where they burn, and create pollution over more remote areas when pushed there by strong winds. In Borneo’s colossal fires of 1997-1998, smoke covered an area of 2,000 by 4,000 kilometers. Pollution of this magnitude not only left hundreds of thousands of people across Borneo with significant respiratory problems, but also prevented fires from being extinguished through natural means. Soot particles in smoke caused small water droplets in clouds to condense, preventing the buildup of large droplets. It is the large droplets which fall as rain that puts out fires – another link in a vicious cycle of rainforest fire.

Borneo’s wildfires are a threat to humans beyond the severe health risks. Just as fire spreads to forest, fire also spreads to agricultural lands, thereby damaging the livelihoods of small-scale farmers. And as more forest disappears, the livelihoods of the few remaining traditional groups of indigenous people come under threat as well.

In some areas of the world, like northern boreal forest in Canada and Russia, fires occur naturally and are now managed by governments because these fires serve an important ecological function. But fires are not meant to occur in rainforest ecosystem. It takes rainforests millennia to fully recover from being cleared by fire. This means great losses among some of the most unique plant and animal life in the world. As we lose forests and the biodiversity that sustains them, we lose important ecosystem services. The valuable natural resources of rainforests do not replenish quickly. They will be totally exhausted if we continue to extract them at an unsustainable rate. Rainforests play important roles in global climate regulation, disease control, and pollination. Rainforests serve as “carbon sinks”, meaning they store carbon in organic material, preventing it from entering the atmosphere as greenhouse gas. But as soon as forests are felled or catch fire, they create threats on a global scale.

Burning peat forest is particularly harmful. Peat deposits store huge amounts of carbon below ground. When peat burns, this is released into the atmosphere as carbon dioxide. In the infamous fires of 1997-1998, between 0.8 and 2.5 gigatons of carbon dioxide were released into the atmosphere. Globally, the clearance of peatlands (by fire or logging) contributes about 10 per cent of all greenhouse gas emissions. Such large-scale emissions maintain the negative effects of climate change around the world.

Of particular concern for OFI are the forest fires which destroy orangutan habitat, pushing orangutans out of the forest and into unsuitable habitats like palm oil plantations, where they come into conflict with humans. Most of the orphans at the Orangutan Care Center and Quarantine (OCCQ) are brought to OFI because of the clashes that arise between orangutan survival and human development. Every new orphan that comes into our care center is a signal that forest is disappearing. As fires and development destroy more forest, we are increasingly hard-pressed to secure suitable habitat to release these orphans once they are recovered and become old enough to return to the wild.

What is OFI Doing to Fight the Fires?

When fires broke out at the east and southeast edges of the Rawa Kuno Legacy Forest, OFI staff stepped up to the cause, although no one had any formal training in fighting fires. Some locals helped in the effort, but were generally afraid of the extreme heat and the unpredictability of the fires. There was no direct government support.

Almost every male member of the OCCQ staff, including the manager, helped in the effort. For over a month, men were fighting the fires relentlessly on site for up to ten days at a time. They were able to use water from the recently excavated trench surrounding Rawa Kuno to fight the fires. But because fires continued to burn underground and re-emerged at different locations, the fight was long and grueling. OFI staff, who remained at the OCCQ, including the women, made trips to and from the fire sites to supply the fire-fighters with food and drinking water. Exhausted fire fighters took the little sleep they could afford on the ground beneath the cover of tarps, with smoke filling their lungs the entire time. Only when the rainy season started in October were the fires finally extinguished. Without the rain, the fight would have gone on much longer.

Thanks to OFI’s donors we were able to have a trench in place surrounding the Rawa Kuno forest. This trench was primarily meant to help OFI rangers patrol the Legacy Forest by boat to detect trespassers attempting to log or hunt, but it turned out to be absolutely crucial in our fire fighting efforts. Without this trench, staff would have had to bring in water from farther away, or drill bore holes deep into the ground to pump out water. These options would have taken much more time, money, and person power than we had and ultimately would have proved much less efficient. It was the rain that ultimately saved Rawa Kuno, but much more forest would have been lost without the water supplied from this trench. If you donated for the Rawa Kuno forest or in response to our plea for help with the forest fires, we sincerely thank you!

Wildfires in Borneo have become, more or less, an annual occurrence. As locals become accustomed to facing the constant haze and difficult breathing conditions from fire for weeks and months at a time, they talk about the fire season just like any other season. The forests under OFI’s protection will likely be threatened with fire in the future. We want to be fully prepared. This year we found ourselves scrambling to get enough hoses, ropes, and pumps to fight the fires. We were completely lacking in some key equipment which would have made the work much more efficient. We will equip ourselves better so that we will be ready to respond even more quickly once the fire season roars into view! And it will, probably will, sooner rather than later! Without really being aware of it, we have become fire-fighters! And to fight the fires efficiently, we need your help!