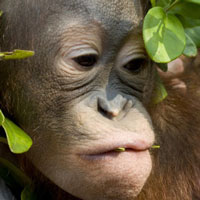 In the Orangutan Care Center and Quarantine, there is a very pretty little girl called Lia, a determined three year old orangutan toddler with a strong personality and a quick, clever mind.

Lia is cuddly, adorable and sweet; she can melt your heart in an instant.  Sometimes when walking through the forest out on release, somebody small and hairy will, all of a sudden, hug my leg and I know that when I look down, it will be Lia coming in for a cuddle.  She grabs onto my leg and climbs up for a big hug.  Sometimes she just wants to be with her chosen human caregiver for most of the day. If she goes off to climb through the vines in the canopy, which I encourage her to do, she does not climb too far from me and if I move she is quick to rush back for more cuddles.

Despite her affectionate nature, Lia can be a bit cheeky.  She is also generally very playful.  One of her favourite tricks involves her momentarily releasing her caregiver’s leg, running over to someone else, and giving them a little smack or nibble on the ankle, and then running back as fast as her bowed little legs will carry her to her ‘protector’ as if nothing has happened, but with a little smug look on her face as if she is the winner. This is naughty, but very funny to watch while sitting in the forest.

Sometimes Lia will be in a funny, floppy mood where she will stand up straight with her arms in the air and then throw herself down in any unexpected direction.  This may be on the ground, or on your lap.  She hits quite hard but does not seem to mind. This behavior seems to have no purpose other than to give outlet to her happiness and energy.  Watching an orangutan toddler play ragdoll is incredibly amusing.

As much as Lia loves horseplay and tricks, she hates bath time. Almost magically, she somehow knows the difference between leaving the sleeping enclosure to go the forest and leaving it when it’s for bath time.  One day I tried to get her and her friends out for a bath so they could be nice and fresh, but also so I could scrub the sleeping enclosure clean while it was empty. Lia’s friends came right out, but Lia utterly refused, even when offered a favourite treat.  There was no way that she was going to leave that enclosure and get wet!  Thus defeated by a three year old, I had to snake my body through the enclosure’s door, the door being the size of a shoebox.

After crawling into the sleeping enclosure, I began to scrub the enclosure slats with Lia still inside. She was watching me carefully, but I didn’t expect what this clever little girl would do next.  As she sat next to me, she began to copy exactly what I was doing and began vigorously helping me clean her little home!  So there we were, myself and Lia, two scrubbing brushes, and a bucket of soapy water, a twenty nine year old woman and a three year old orangutan girl scrubbing together on a Saturday afternoon. A great little helper, she actually did a wonderful job!

However, I was the winner in the end!  After the enclosure was cleaned, little Miss Lia did get her bath, since I used our mutual position in the sleeping enclosure to give her a good soaping and rinse. Although she didn’t enjoy it, she welcomed a big cuddle with a nice fresh towel at the end.  With her expressive little face and mischievous personality, Lia is a well-liked resident of the Orangutan Care Center and Quarantine (OCCQ). With your help, we are doing our best to give Lia and her peers at the nursery a safe and caring home in their orphaned childhood, and a chance at freedom when they are mature.

The four Bears from Pontianak: Bears of May 2020