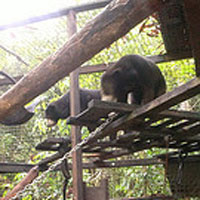 It was a busy summer for the three Malayan Sun Bears (Helarctos malayanus) at the Orangutan Care Center and Quarantine(OCCQ). In a quiet corner of the grounds, there was “action” every day for almost two months. This was the result of several dedicated long term volunteers and staff, changing ideas into reality, to make life better for these rescued animals.

Change began earlier in the year when a brand new enclosure was built by volunteer Sean O’Donovan for juvenile male bear Kevin.  The new enclosure gave Kevin a larger personal space more suited to his growing size. This enclosure became a blank canvas for the ingenious enrichment activities of another experienced volunteer. Work with some of the few bear rescue centers that exist in Borneo had given this volunteer a remarkable understanding of bear needs and desires which seem to include such things as multi-level sleeping platforms, scratching logs, and sturdy tire swings. The little known nature of sun bears makes it difficult to keep them happy and active in captivity, but our volunteers seem to have created a bear haven.

The three bears in OFI’s Orangutan Care Center and Quarantine (OCCQ) came to us as a result of the “no animal turned way” policy, regardless of species or situation, practised at our Center. This policy was instituted by OCCQ’s founder and director, Dr. Biruté Mary Galdikas. Kevin came to us as a Forestry Department confiscation/rescue in a small transport cage with a chain around his neck.  He was so scared and aggressive towards humans that he had probably been abused. Since infant sun bears are reliant on their mothers for several years (much like infant orangutans), and mother bears are fiercely protective, the fact that Kevin was alone meant that Kevin’s mother was likely killed in front of him.  Kevin was stolen away either to be a prize or a pet. Wild cubs need their mother’s protection and training about where and how to find food, water, and shelter when roaming the forest.  We have watched Kevin’s growth since his new enclosure and enrichment. He has become a healthy and energetic young bear.

Our other two bears, both female, Desi and Hildegard, have it even better. The successful introduction of these two bears into a common enclosure seems to have made both calmer and happier. The introduction was tense and delicate for the assistants and volunteers. But after only 48 hours and one quarrel over food, it became clear the two bears had settled their dominance issues with the older but smaller Desi in charge.  They now happily share two enclosures that can be separated and contained, for cleaning, repairs, or medical attention.  A new common bear bath is large enough for the two of them to wade together, and resting platforms allow them to play and share food. They can often be found lounging on top of each other for an afternoon nap in the sun, happy as can be for two bears in captivity.

Sun Bears are notoriously shy in the forest, and not much is known of their life histories or behavior. Victims of the same deforestation crisis as orangutans, bear populations cannot be stable in the wild. Rehabilitation of these animals is incredibly difficult as they are naturally territorial and aggressive encounters with wild bears endanger rehabilitated individuals. Another impediment to successful rehabilitation is over-habituation, observed in most bears kept as pets or in zoos. These unfortunate individuals will not easily integrate into the wild because their tendency to be drawn to humans and settlements while looking for food ends up with the bears often being killed.

The recent success with our new enclosures has given us encouragement to continue with plans for  much larger, more permanent enclosures. Our dreams include forest enclosures where these three bears can have more room to range, explore, forage, and play. The fact that we know they can live harmoniously, and adapt to change, gives us hope.

Along the way, our other rescued animals, including a cassowary (Casuarius sp.)  and two bearcats (binturongs; Arctictis binturong) also benefited from the bear action. The cassowary’s enclosure was enlarged by almost three times, to include more shade, vegetation, small trees, and a foraging area. He got a new bath and quarantine shelter, and can now be seen happily picking through fallen leaves throughout the day. Native to the island of New Guinea from where he was taken as a chick, he cannot be returned to the wild in Borneo but the enclosure seems to duplicate somewhat the appearance of his original woodland habitat.

The bearcats received improvements and additions similar to the bears’ on an appropriately smaller scale, including new ladders, tunnels, and feeding platforms. We can only be sure these nocturnal animals like what they have been given as we see them emerge calmly at the end of the day with a yawn and a stretch from their new hiding spots. Then the bearcats descend the ladders to wake up slowly and eat.

It saddens us that these beautiful creatures were taken from their wild homes and held captive. Nonetheless, we try to show them compassion through daily attention, and continue to give them some of what they lost: comfort, safety and happiness. Of course, ultimately our goal is to return them to the wild but as this may prove extremely difficult, we do the best we can.

Orangutan of the Month: Anthrax

Orangutan of the Month: Ingrid