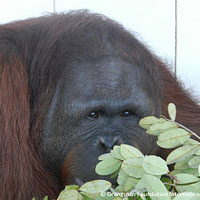 This month was an easy choice for an Orangutan of the Month.  I have been spending much time with Bintang over the past few months; he is a character I will always remember.  Bintang means star in Indonesian and what a star he is!  He is an adult male with a great head of hair who is starting to develop cheek pads.  He is quite large for a subadult male and has an outsize personality to match!

Bintang is an orangutan at the Orangutan Care Center and Quarantine (OCCQ) who has already been selected to be shortly released.  He is currently in pre-release quarantine.  Pre-release quarantine is a crucial part of the entire release process.  In pre-release quarantine, OFI caregivers give health inspections to ensure that we are not releasing an orangutan who could spread diseases to the wild and ex-captive populations.  At this point, most orangutans are housed in solitary enclosures.  This helps prepare them (especially the males) for a semi-solitary life, which is the social structure of orangutans but that is not the main reason why they are housed. They are housed this way for medical reasons so that we know that the quarantine will be successful!

Before Bintang was moved to pre-release quarantine, he shared a sleeping enclosure with one of his orangutan friends.  They would play together out in the forest and when they would return from the forest on daily-release they would build nests.  However, there comes a point in every orangutan male’s life when he needs to be separated from other males. In this case, Bintang, as the much larger male, started behaving in strange aggressive ways towards his cagemate.

I love spending time with Bintang; I can hold his hand for hours!  When I walk by him he always puckers his lips like he wants to kiss me.  Whenever he does this, I always have to go back and give him another scratch on the belly or a flower.

But beware; Bintang loves shirts!  Everyone knows to keep an eye on his hands when passing him!  He has taken several shirts in his time here at the OCCQ.  I try to visit him every day to give out extra enrichment, food, and liquids to him and the other orangutans at the quarantine facility.  No matter how full he is he will always take more food or liquids if I offer it!  When he is full he will even take another mouthful of milk and once I am out if eye sight, he will spit it out.  He will never spit it out in front of me though!  I like to think he is being polite by always accepting what I give him, but he probably has ulterio r motives!

I often like to give various foods inside half of a coconut shell wrapped in banana leaves that I have sewn into a burlap sack for enrichment.  Bintang will spend hours playing with this enrichment.  I like to give it out at about 4 pm.  This way Bintang can have another snack before completing his sleeping nest in his quarantine enclosure.  And once he has opened the parcels he can use the burlap sack as part of his nest.

Although Bintang is very large and one might think he would just rip apart the parcel, he is actually very gentle.  He carefully pulls the stitches out of the burlap sack, unravels it a bit, adjusts the bananas leaves as to not drop the coconut and then begins cleaning the banana leaves.  He will clean off every speck of food from the banana leaves and then set ithe leaves aside to use for part of his nest later.  While he eats the food inside of the coconut, he will actually try and share it with me!  One time I was standing there watching him and he actually scooped up some of the fruit and with his giant hand brought it close to my mouth for me to try – what a gentleman!

I fell in love with Bintang the first time I laid eyes on him.  I think what I love so much about Bintang is that he can be very gentle. I also see an orangutan who will do  well in the wild.  I see his forest skills flourishing and his nests are incredibly intricate.

With such a charming personality, combined with his good looks and magnificent hair, I know he will be popular with the females.  I know and have seen how strong he can be which will make him a great competitor with other males.  The orangutan that Bintang first shared his enclosure with has already returned to the wild! It is only a matter of time before Bintang gets to return to the wild.