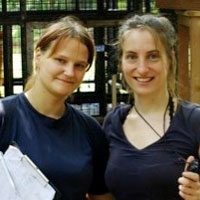 Numerous studies in the wild and in captivity indicate that the great apes, chimpanzees, gorillas, and orangutans, are among the smartest land animals on the planet.  The question is why are they so smart.  Does great ape sociality have anything to do with it? Orangutans live on two different large islands, Borneo and Sumatra. It is thought, therefore, that they consist of two different species.  Sumatran orangutans have been documented to be more gregarious and possibly more social than Bornean orangutans. Sumatran orangutans also use tools, have longer birth intervals, with males typically reaching maturity, in terms of developing cheekpads (or flanges), at a much later age than Bornean males.

Is it possible that these differences in tool-use and behavior between Sumatran and Bornean orangutans arise out of differential sociality? Is it possible that Sumatran and Bornean orangutans show differences in their intelligence and in their general cognitive abilities due to different social environments?

Orangutan individuals living in a richer social environment, i.e. one with more opportunities for social learning, might have better cognitive skills.

These are questions researchers Laura Damerius and Zaida Kosonen from the Max-Planck Institute of Evolutionary Anthropology in Leipzig, Germany and the University of Zurich in Switzerland are trying to assess. Laura and Zaida are conducting non-invasive experimental studies with wildborn ex-captive orangutans at OFI’s Orangutan Care Center and Quarantine (OCCQ) in Pasir Panjang, Central Indonesian Borneo.  Further, their studies address whether relatively intense contact with humans (relative to wild orangutans) influences orangutan behavior and intelligence. The hypothesis is to examine whether animals with a stronger orientation toward humans, and therefore presumably a longer exposure to humans and human artifacts, have a greater repertoire of learned skills, a better social learning ability, greater exploration tendencies regarding objects, and less neophobia (fear of new things).

Researchers Laura and Zaida are doing a number of experiments, one of many being the “box task.”  This tests flexibility responses. Orangutan subjects learn to open wooden boxes by lifting the lid (See picture 2).  In the second part of the experiment the learned solution no longer works as now the lid will only open if it is slid to the side (See picture 3 with orangutan “Lanang”). The researchers’ measure of flexibility and thus, intelligence begins with an assessment of curiosity and exploration, learning the new solution, and the persistence of using the new solution on the next box.

All experiments are conducted without the presence of the researchers but are recorded on two video cameras placed at different angles so that orangutan subjects are not influenced by the presence of humans. The video record ensures maximum objectivity in that the researchers will have ample time and opportunity to observe behaviors that may have been missed during visual observation and to code the behaviors and do statistical

Their studies will also take Laura and Zaida to sanctuaries in Sumatra, where they will carry out identical tests as in the OCCQ and compare the data, looking for similarities or differences in cognitive behavior, between Bornean and Sumatran orangutan subjects.

Laura and Zaida’s research will take two more years of sanctuary study. Once the data have been collected and analysed they will begin the task of writing their PhD theses in the natural sciences.

OFI is delighted to be involved in this valuable research that may tell us something about the nature of human influence on ex-captive orangutans and thus, help us plan orangutan rehabilitation and releases into the wild in a more sophisticated way.  By showing differences between Sumatran and Bornean orangutans in terms of social cognition, we are also learning how orangutans can be housed in captivity (for instance, in zoos) to keep them mentally healthy.

Possible differences in Sumatran and Bornean orangutan cognition and sociality may give valuable information on the origin of different types of  intelligence. The great intelligence of orangutans is one strong reason (but not the only reason) to respect them as one of our closest living relatives in the animal kingdom and keep them alive as populations in the wild. But this intelligence, even in the semi-solitary orangutan, may be linked to sociality and differences in that sociality.  This is one gift that the “solitary” orangutan may give us, an understanding of the extreme importance of sociality in determining intelligence.