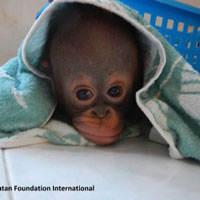 I am  very happy to write about Charlie for Orangutan of the Month because of all the orangutans at Orangutan Foundation International’s Orangutan Care Center and Quarantine (OCCQ), I have spent the most time with him. I was here when Charlie arrived and I have been able to watch his progression firsthand. And quite a progression it has been!

I first met Charlie the day after he was brought to the OCCQ. I walked over to meet the new arrival and gazing back at me was one of the most beautiful orangutans I have ever seen! Charlie was wrapped up in a blanket and was staring up at me with his huge eyes. I immediately thought of Yoda from Star Wars! I made this comparison not only because of Charlie’s big eyes but also due to the fact that, despite his very young age, he looks wise beyond his years.

Charlie arrived at the OCCQ earlier this year.  He could not have been much older than one  and a half years of age. OFI’s Rescue Team travelled the long distance to Palangka Raya, a ten hour drive, to rescue him.   Since his arrival at the OCCQ, Charlie has had many admirers. With eyes like his, how could anyone not fall in love with him?

Not only do the staff at the OCCQ recognize Charlie because of his stunningly gorgeous eyes but also because he clings to his caregivers in a way I have not seen before. You can always spot Charlie because he holds onto his caregiver’s leg!  He clings in this unique way until he reaches the forest.  Although it makes it difficult to walk, it is worth it for the caregivers, because once Charlie is in the forest he is an amazing climber!

When I first met Charlie he seemed nervous about climbing. However, with practice and  help from his caregivers, Charlie now climbs into the trees by himself or with his orangutan friends. In the beginning, Charlie needed encouragement to climb.  He was quite shy and did not want to leave his caregiver’s arms (or leg!). Initially Charlie would not venture high into the trees and was very slow when climbing (probably due to his young age). However, one of  his caregivers noticed this and decided to help him out by climbing up into the trees with him. Charlie then began climbing into the arms of his caregiver while the caregiver was himself up in the trees. Eventually Charlie became comfortable climbing higher and higher on his own. Now he still loves to cuddle with his caregiver, but is also happy going off on his own.

Charlie’s personality and confidence have grown rapidly during his time at the OCCQ. He recently made friends with a slightly older orangutan named Silver. Now it is easy to spot them climbing to the tree tops together! I could (and do!) watch them for hours! Charlie watches Silver’s movements very carefully and then will mimic them. Watching and learning from Silver has really helped Charlie’s forest skills and confidence develop. As a somewhat slow climber, he is deliberate in his movements. One day when he is slightly older he will be flying through the trees!

Sometimes I find myself lost in thought picturing Charlie as an adult cheek padded male! I try to imagine sweet little Charlie as a strong, 300 lb. adult male.  I very much  look forward to seeing how his appearance, and also his personality, develop over time. I picture the body of Tom (the dominant adult male orangutan at Camp Leakey) with Charlie’s face plus cheek pads.

Charlie has become so independent that when it is time for a bath, he is keen to wash himself!  One time as I was bringing him from the forest to get cleaned up he detached himself from my leg and climbed into the wash bucket!  He grabbed the hose and started splashing around getting himself all wet!  I helped clean him with soap but when it was time to rinse, he climbed back into the bucket to help and to play.  Sometimes orangutans are scared of baths because the water can be somewhat cold, but Charlie shows how much fun it can be!

I feel so fortunate to have met this hairy, little, inspiration and to have seen how his forest skills have developed even in the relatively short time I have known him. I try to learn from Charlie: even though something might be difficult to do at first (like climbing), keep trying, find friends to help you, and observe, observe, observe!

I hope one day to be able to return to Borneo when Charlie is older and see him return to the wild with all of his forest skills perfected.