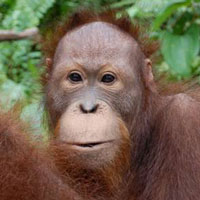 When I first met Ari, I immediately noticed that he is an incredibly handsome orangutan! However, I quickly saw that there is much more to him than meets the eye. Since he already had the nickname “Handsome Ari,” I know I was not the first person to have been charmed by his looks but after getting to know him, I learned that it is his kind and gentle nature that truly sets him apart.

Ari arrived at OFI’s Orangutan Care Center and Quarantine (OCCQ) as a young orangutan. He was relinquished to OFI by a man who had kept him as a pet. Sadly, Ari had been separated from his mother for quite some time. Chances are that his mother died (probably killed) before Ari was sold to the illegal pet trade.

Ari has thrived during his years at the OCCQ. His caregivers have watched him grow into a charming and mild-mannered adolescent orangutan. For a few years, Ari has shared a sleeping enclosure with Daywa. Despite being quite different in size (Daywa is smaller), the two love to play. For many male adolescent orangutans, playtime is rough and tumble. Ari is an exception. When he plays with Daywa, he is incredibly gentle (he even lets Daywa win the occasional wrestling match!).

Ari’s favorite part of the day is going out to the forest to explore and play. Each morning, Ari will climb onto his caregiver’s back for the walk into the forest. As they walk down the OCCQ boardwalks, Ari constantly scans the forest looking for a suitable place to jump off the caregiver’s back so that he can start climbing. Ari loves to climb and explore but more than that, he loves to play with other orangutans. If he is one of the first orangutans out in the morning, he will happily go off on his own. However, once he hears his friends come out to the forest, Ari returns to find them. Ari can be extremely daring and it is not uncommon to find him instigating (and then winning) a wrestling match with one or two orangutans that are twice his size.

When Ari is up in the trees, it seems that some kind of commotion always surrounds him. First, the trees start shaking and branches crack, and then Ari appears – skillfully and joyfully maneuvering from tree to tree. On the rare occasion that Ari is on the ground, he can be found snacking on termite nests. They are an excellent source of protein and the OCCQ caregivers will look for them in the forest. Ari is always aware of the caregivers’ termite nest collection efforts and he is often the first orangutan to appear once a nest has been found. If the caregiver offers him a nest, Ari will gently take it and eat the termites. He always tries to find a quiet place to eat and this could be for two reasons: he could be trying to hide his snack from his friends or he could be hiding the fact that he is a somewhat sloppy eater!

When it’s time for Ari to go back to his sleeping enclosure at the end of the day, he climbs back on his caregiver for the trip. Walking through Borneo’s peat swamp forests can be a difficult job. (I can attest to this after being stuck knee-deep in the mud on more than one occasion!) Generally the orangutans will keep themselves clean by clinging to their caregivers as they trek through these tricky muddy areas. Ari is incredibly considerate and will voluntarily clamber off his caregiver’s back so that he/she can navigate the difficult areas without the added weight of an orangutan.

Like many orangutans, Ari is inquisitive and spirited. When you watch him closely, he also reveals his warm and compassionate nature. It may seem strange attributing human traits to an animal. However, after watching Ari’s interactions with the other orangutans and caregivers at the OCCQ, there is no question that these are the qualities that best describe him. There is an old saying that you can’t judge a book by its cover. However, in Ari’s case you can. His handsome face is just the introduction