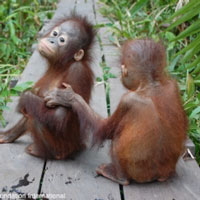 Most of the new arrivals at Orangutan Foundation International’s (OFI) Orangutan Care Center and Quarantine (OCCQ) are young, orphaned orangutans. The caregivers at the OCCQ take these orangutans in and raise them like they are their own children. In the wild, the bond between mother and baby orangutan is incredibly strong. This bond must be emulated at the OCCQ because it is this bond that will provide the love and support needed during an orangutan’s first few years. During this time, it is also very important that the young orangutans socialize with each other. Many orangutans have friends that they play with, but it is rare that they are inseparable. Jessica and Weyerhauser are two such rarities.

When I watch Jessica and Weyerhauser together, their fondness for one another is obvious. Like children, the two are sometimes reluctant to share or are unruly with each other, but at the end of the day they are steadfast friends. The two arrived at the OCCQ within six months of each other. Weyerhauser was less than a year old when he was brought in with his mother. His mother was critically ill and despite the efforts of OFI’s veterinary staff, she passed away within a day of arrival. Jessica was also under a year old when she was brought to the OCCQ by the Forestry Department. She had been confiscated from a house where she was being kept as a pet. Both orangutans quickly formed strong relationships with their OCCQ caregivers and some of the other orangutans. After a few months, Jessica and Weyerhauser happened to be moved into the same sleeping enclosure. This was the beginning of their lasting friendship.

At first, the two sought comfort from one another and would hug if they heard thunder in the early evenings of Borneo’s wet season. Then as they went out to the forest each day to play, they started spending more time together. Weyerhauser is slightly older. With that age came a more adventurous streak. Jessica would follow him on his explorations of the nearby forest, watching what young leaves he would eat and following suit.

Once in the forest, the two never stray far from each other. They will try to walk side by side and often look as if they are practicing for a three-legged race. As they walk, Jessica and Weyerhauser will take turns holding onto each other’s backs. Like the movement of any young child, Jessica’s and Weyerhauser’s movements are quite jerky. The walkways are fairly narrow, and the two frequently stumble over one another as they amble down the boardwalk. If one stops to forage for leaves and berries, the other will stop nearby and do the same. They are beginning to test their independence, but they always try to stay within sight of each other. If the two happen to get separated, Weyerhauser will let out a high-pitched squeal, almost like a small bird, to let Jessica know where he is.

When it comes to climbing, Jessica and Weyerhauser are still reluctant to leave the ground. Weyerhauser continues to be the more outgoing of the two and he seems to encourage Jessica to test her limits. Weyerhauser will climb a small tree next to the boardwalk and then patiently wait for Jessica to join him. They only stay in the tree for a short time, but they work together to develop their forestry skills.

Both Jessica and Weyerhauser continue to have a close relationship with their surrogate mom, Ibu Ombeng. During the day, the two will seek her out for a cuddle. This nurturing relationship will remain important to their development for the next few years. Watching Jessica and Weyerhauser together reminds me of the purity of true friendship. Their relationship seems to consist of a combination of trust, support, love, and fun. Despite both losing their mothers at a young age, the OCCQ has provided these two friends with the encouragement and love needed to restore some of their childhood innocence and confidence.

You can see a video of them here