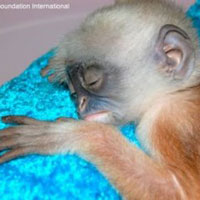 “Ewok,” the red leaf monkey infant at the Care Center

There’s an old adage that says it takes a village to raise a child. Each day this phrase is put into action at OFI’s Orangutan Care Center and Quarantine (OCCQ) in Pasir Panjang. There are many people involved in raising the numerous orangutan orphans that have been brought to the OCCQ. There are a variety of people who help feed, clean, nurture, and “teach” them so that one day they can return to their true home – the wild. Currently, there are over 340 orangutans living at the OCCQ; however, there are also a variety of other species that call the Center home.

Orangutan Foundation International’s (OFI) primary focus is forest protection, along with orangutan rehabilitation and conservation. However, we will also accept any other animal in need. Over the years, sun bears, macaques, binturongs, and gibbons have all been cared for at the OCCQ.

In early January 2012, there was a new arrival – an infant red leaf-eating monkey or red leaf monkey (Presbytis rubicunda) named Ewok. Like all the infant orangutans that come to the OCCQ, Ewok arrived as an orphan. Little information was given about what had happened to her mother, but chances are that she was no longer alive. Ewok arrived with her umbilical cord still attached. It had mummified, making it difficult for the veterinary staff to gage her age. Based on Ewok’s coloring and other physical characteristics, it is thought that she was between one and three months of age when she came into OFI’s care.

As with the orangutans, so with Ewok: there has been “a village” involved in raising her. In the wild, red leaf mothers will pass their babies around to other females living in their troop. In order to follow this natural behavior, a combination of local OFI staff and volunteers provide around the clock care. As with a human baby, this involves endless numbers of bottles being made, lots of cleaning, and many sleepless nights.

When Ewok arrived, she was predominantly white with a reddish tinge on her back. She had limited coordination and never strayed far from her caregiver. As the months passed, Ewok has gone through significant behavioral and physical changes. Her shyness has faded and an inquisitive, adventurous, and spirited little girl has emerged. Her once white fur is becoming an increasingly dark shade of red, and more facial hair is appearing weekly.

Ewok is one of the most curious creatures I have ever encountered in my life. She never stops being curious. She always wants to explore, touch, or swing on anything she can. When Ewok first arrived at the OCCQ, she would only take tiny hops. Now, after a few months, she can jump quite far and with great accuracy. Since her human caregivers have never raised a red leaf monkey before, they are a little unsure of her abilities. You can often hear them gasp when she goes to make a big jump. Ewok, however, always amazes those watching with her precision. The only downside to Ewok’s increased jumping abilities is that items that were once “put out of reach” are now once again within reach.

Although Ewok’s confidence and independence are increasing, she still relies heavily on the comfort of having her caregiver nearby. When she’s exploring a tree, Ewok has recently been going higher and higher. However, she frequently will look down to make sure her caregiver is waiting below. She also loves to be snuggled in her caregiver’s arms. When she is drinking a bottle or falling asleep, she prefers to be in the arms of someone she trusts. Ewok also loves being tickled. Her caregiver will tickle her little white belly and Ewok will close her eyes, open her mouth, and make a laughing noise. Even after the tickles have stopped, she will keep her eyes shut for a few minutes, relishing “the moment.”

Grooming is a natural behavior for many monkey species, and one that isn’t lost on Ewok. Although she has yet to reciprocate the favor, she loves to be groomed. Her caregivers will gently pick through her hair. She often falls asleep as they do this. Even when she is in the most rambunctious of moods, Ewok will quietly sit and submit to being groomed as soon as it becomes obvious someone wants to groom her.

Red leaf monkeys are endemic to Borneo (in other words, found no place else) and are widespread throughout the island. However, they are listed on the IUCN Red List as being a species of least concern when it comes to extinction. Nonetheless, increasing habitat loss has seen red leaf monkey populations in Borneo decrease. In the wild, red leaf monkeys are incredibly territorial. Once again, this trait has not been lost to Ewok. She dislikes motorbikes and will emit loud calls to try to frighten them out of her territory. She also approaches, sometimes hesitantly, strange people and acts as though she wants to chase them off.

Accepting different species into the OCCQ is not without its issues. Staff and volunteers work tirelessly to accommodate, care for, and learn about these different species. Red leaf monkeys have incredibly complex, chambered stomachs. Their stomachs allow them to break down and digest the fibrous foliage that makes up much of their diet. Although much of a red leaf monkey’s diet consists of leaves, seeds, and flowers, they will occasionally eat fruit. However, they avoid sweet, ripe fruit. Since the orangutans at the OCCQ have very different dietary needs, understanding and adapting to Ewok’s needs has been a learning experience for everyone.

Up until now, infant red leaf monkeys have not been successfully hand-reared in captivity. The care and love Ewok has received from her “village” of caregivers has allowed her to thrive and become a lively and joyful young girl. She has thrived successfully with us for almost four months! Everyone is optimistic that her day will come and she will return to the forest.