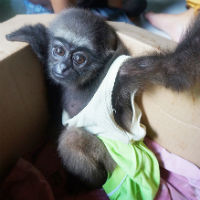 At Orangutan Foundation International’s OCCQ, we have a policy of accepting and providing safe sanctuary and medical care to any animal in need. We work primarily with orangutans but at times are called upon to help other Borneo wildlife. This is how I came to meet Dea, the baby gibbon.

Like orangutans, gibbons are apes (They are commonly called “small apes” while orangutans, gorillas, chimpanzees, and bonobos are “great apes”). Like orangutans, gibbons suffer at the hands of humans. They are hunted, their offspring stolen from the wild and sold as pets in Indonesia and abroad. Along with habitat deforestation, the illegal wildlife trade is bringing ape populations to the brink of extinction. Gibbons are endangered. Keeping them as pets is illegal but this doesn’t stop locals and foreigners from purchasing these animals on the black market. Unfortunately, this was Dea’s life before she arrived at the OCCQ.

Dea was found in a private home in Pangkalan Bun where she lived in isolation in the backyard, confined to a small wooden box with no shelter from the rain. When Dea was first spotted by an OFI volunteer it was noticed that she had a small wound on her finger. As is not unusual for gibbons living in captivity, Dea had begun to self-mutilate. By the time rescuers arrived to bring her to the Care Center 24 hours later, she had eaten most of her own two fingers and was working on a third. It seemed her left hand was numb.

Dea arrived at the OCCQ still wearing the urine and feces soaked baby clothes with which her owners had dressed her. She was small, fragile, and weak. She seemed to have no feeling in her mutilated hand. I sat with her holding her small body as OFI veterinarians amputated the two fingers, which had been partially chewed off. Upon further examination it was apparent that Dea’s arm was badly broken. The bones had long since healed in their shattered position, leaving her with a strangely twisted arm. Our veterinarians suspected that this might have been the cause for the numbness in her hand, although we don’t know for certain. Either way it became clear that Dea would only have one working hand.

There was something horribly tragic in Dea’s loss, a gibbon without the use of her hand. How could she survive? If orangutans are the “people of the forest,” than gibbons are surely the acrobats of the forest. I thought of the first wild gibbon I saw more than 4 months ago in the forest of Tanjung Puting at Camp Leakey. Standing by a feeding platform, staring through my camera lens waiting for an orangutan to arrive I almost missed the large white-bearded gibbon that stared down at me from a tall tree. But there was no missing the loud whooping call that emanated from his chest a moment later. I stared up in amazement as he flew over my head like a bird, his long, graceful arms catapulting his body from tree to tree with swift, effortless motion. Between branches, he danced circles around our heads in an elegant aerial performance, worthy of Cirque du Soleil. To see a gibbon swing in the trees is to witness the forest’s greatest trapeze artist in action!

But now I was sitting on the steps of the OCCQ veterinary clinic. Looking down at Dea, still wearing her urine soaked baby clothes, I couldn’t help but think of that Camp Leakey gibbon. Physically, Dea looked just like him and yet Dea’s life was so removed from that of her wild counterpart that it broke my heart that, because of human greed, Dea would never be able to “brachiate”- the primate ability to swing from branch to branch. I thought of all the orangutans I’ve met in my stay in Borneo. Some have lost a finger or a hand, some have lost an arm or their eyesight, and all have lost much more- their mothers, their childhood, and their freedom. I’ve learned from them of their incredible ability to endure. I knew there was still hope for this small gibbon.

Following her surgery, Dea needed a full-time baby-sitter to make sure she didn’t continue to self-mutilate. So, I took on responsibility of primary caregiver to Dea. We became close friends during her stay at the Care Center. The first thing I noticed was her docile demeanor. Dea wanted nothing more than physical contact and motherly care. She seemed only at peace when she was being held, to the extent that she would panic whenever I tried to place her off my lap. Usually, gibbons her age in the wild were beginning the weaning process and starting to establish more independence in the forest. After spending significant time with her it became clear that Dea, who had lived her young life as a pet in a box, hadn’t had much experience using her body. It was about time she built up some strength and confidence in the trees.

Initially, Dea’s mobility seemed very limited. She would “hoot” in fear when I tried to place her in a low hanging mango tree. She was shaky when she walked and uncoordinated when she tried to climb. Trees were intimidating to little Dea. With only one hand, she was unsure of how to swing herself from limb to limb.

Finally, after speaking with another volunteer we had the idea to bring Dea to the pumpkin patch, a shady garden crisscrossed with hanging vines and small wooden poles. To my delight, Dea immediately took to her new “playground”! The vines and wooden poles were thin enough for Dea to wrap her small hand around and there were so many that she never felt unsafe. I sat with Dea for hours, watching her play and explore her pumpkin patch jungle gym! As she grew more comfortable, she began to use her limp hand for balance and leverage. I couldn’t believe the improvement she made in such a short span of time. Her nervousness faded away. Dea was in her element for the first time since her captivity began.

From that point on, I regularly brought Dea to her pumpkin patch to practice climbing. As she rested on a vine laden wooden pole, I would bring her fruit and leaves to eat. She had a hearty, ever-growing appetite and would try almost anything. While in captivity in Pangkalan Bun, her diet consisted of milk and packaged snacks, so I was excited to see her share the same enthusiasm for bananas, mangos, and fresh young leaves from the forest. I even watched her snack on ants.

Dea’s hand healed nicely in a short span of time but the only way to stop her self-mutilating for good was to join her with other gibbons. Because the OCCQ does not have an established gibbon rehabilitation program, we made arrangements for her to go to a local gibbon sanctuary where there are many more like her. Gibbons are social animals and it’s important that they have access to others of their kind. This gibbon sanctuary, near Palangka Raya, is run by Pak Chanee who, interestingly enough, as a young man was first inspired by Dr. Biruté Mary Galdikas’ work with orangutans.

By the end of her stay at the OCCQ, Dea’s confidence was soaring. Watching her happily snack on leaves while she twirled around in pumpkin vines, her excitement in exploring her new found freedom was palpable. I felt so happy that we were able to provide Dea with a second chance.

Dea is one of the lucky ones. For every rescued gibbon or orangutan, there are countless more being held prisoners as “exotic” house-pets all across Southeast Asia. But as wild animals, they will never be happy without their freedom. For as content that Dea seemed on my lap, she was infinitely happier to be outside in the sunshine, climbing around the vines, and eating leaves and insects. I know Dea has a long journey ahead of her, but I know that she now has something she never had before, a chance at freedom, and a gibbon version of hope and happiness.