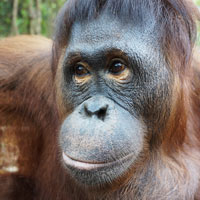 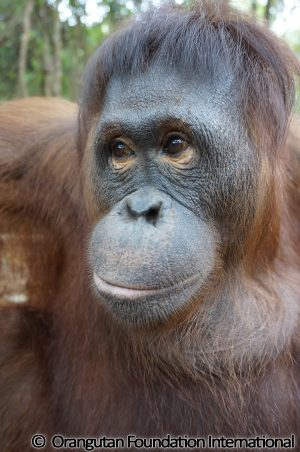 It is morning at the Orangutan Care Center and Quarantine. The soft light of the post dawn sky filters through the tree tops as the orangutans enjoy their breakfast of bananas and coconuts. Sally, a large adult female, has caught my eye. She has finished eating her breakfast and is interested in something a little more stimulating. She reaches her long arm out from between the bars of her night enclosure, with a cheeky look crossing her face. For most orangutans, this gesture is an inquiry for treats! But I know what Sally is asking for…. I reach my hand out to meet hers and with a loud “Smack!” We slap hands! She reaches her arm out a bit further and “Smack!”- we slap hands again! Sally’s mouth quickly broadens to reveal a big, semi-toothless, playful grin. The famous Sally smile!

Sally is a big lady with a big heart! Her sweet smile is just one of her many endearing charms. Sally has a distinctly feminine appearance. Her dark eyes are accented by light, cream-colored eyelids and thick eye lashes. Her girlish pink lips give her the impression she is wearing lipstick and she sports a lush coat of long chestnut-brown hair. But Sally is more than just a pretty face. Warm, patient, silly- Sally is the kind of friend we’d all want! If the OCCQ awarded superlatives to each orangutan, Sally would win “Miss Congeniality”, because of her fun-loving, charismatic nature.

Little games like the “hand-slapping game” or tug-of-war are some of Sally’s favorite enclosure activities. She likes playing almost as much as she likes eating, which is saying a lot for an orangutan. But she is no fool! Snacking is a collectively recognized pastime amongst orangutans and Sally is not the exception. She is, however, always a lady with her food! When presented with nuts or fruit for snack, Sally likes to lay her treats in front of her in an impressive buffet spread, delicately deshelling the nuts and nimbling at each item, one at a time. With peanuts, she keeps a handful held close to her chest and eats one peanut at a time, like an engrossed movie-goer eating popcorn at the theater. In the mid-day Borneo heat, iced fruit treats are also a favorite for Sally. She hurries to get as many as she can before Kasmin, her enclosure-mate, gets it first. 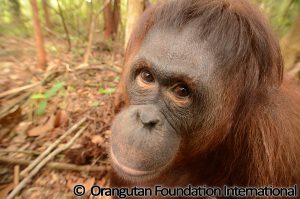 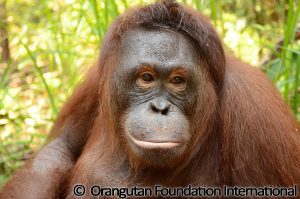 Sally and Kasmin have the funniest friendship. They are what we jokingly refer to as “frenemies”. Best friends but also endless rivals! Kasmin is the bigger and more assertive of the two, and is always trying to get more food and attention than Sally. But Sally is not afraid to hold her own with Kasmin! Sally always stands up for herself and knows how to navigate the small tensions with amazing social grace. On one particular occurrence, Kasmin grabbed a caregiver by the leg and wouldn’t let go, but Sally cut in and pulled Kasmin off of the staff member. Kasmin was stressed, but Sally knew how to calm her down. She was later seen gently grooming Kasmin as the two lay relaxed on the cool floor of their night enclosure. Little arguments don’t faze Sally! She has this attitude that says “Don’t sweat the small stuff!” 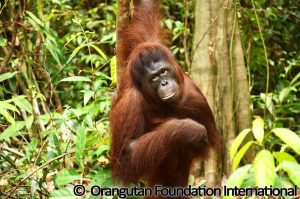 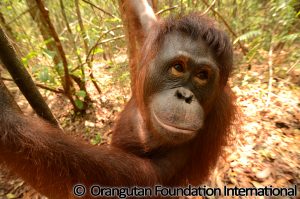 Kasmin is not Sally’s only friend at the Care Center. Like any true socialite, Sally can easily make friends with any orangutan she meets. She has that rare ability of getting along with just about anyone.
When she walks into the OFI forest for her daily release, it is like the star has arrived at the red carpet! There are always one to two orangutans who immediately come over to greet Sally and make her acquaintance (ask her for her autograph, etc.). It seems that she is never finished making new friends. We never know who Sally will bond with next. She has many admirers at the OCCQ, but can you blame them? Who can resist this big ball of love!

During her day release, Sally is usually accompanied by an entourage of one or two friends who eagerly follow her around. Sally is slow to travel the forest, but she loves climbing and resting high on tree limbs. She moves with the graceful leisure of a confident older orangutan. But Sally is still a kid at heart. It isn’t long before resting turns into grooming turns into teasing turns into playing! Sally flashes her big silly grin and the games are on. She is immediately consumed in a clumsy wrestling match with her one of her friends. It is endlessly entertaining to watch two adult orangutans rolling around in the dirt and playing like children!

You’d think because Sally loves her releases that’d she always be eager to get to the forest but you’d be wrong! Both to and from the OFI forest, Sally prefers to be “fashionably late”. When Sally’s caregivers take her by the hand to walk down the jungle boardwalk, Sally makes it very clear that she is no hurry to arrive in a timely manner. It can take a really long time to get her motivated. One of her preferred methods of transport is for two people to grab each hand while Sally lets her feet “ski” over the ground as she is dragged along. With her growing size, this is challenging for her caregivers. But Sally finds it very entertaining and she is more than willing to “ski” all over the Care Center. Her slow moving behavior has become a bit of a running joke among staff and volunteers. When anyone feels particularly sluggish they joke that they feel “like Sally on a boardwalk!”

The caregivers, volunteers, and orangutans at the OCCQ all love spending time with sweet Sally. After observing her in the forest on many occasions, I can see Sally has amazing potential to live as a free orangutan in the wild once again. I would miss her smile and I would miss her games, but I hope her day for permanent release comes soon.