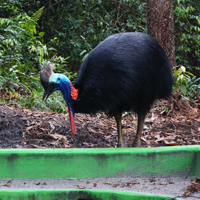 The Orangutan Care Center and Quarantine houses hundreds of wild born ex-captive orangutans in the process of rehabilitation but did you know that we also house a cassowary? 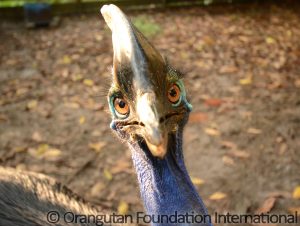 Standing at almost 4 feet and weighing around 90-100 lbs, this magnificent land bird with the jewel-colored head is about as far away from an orangutan as you can get. But our cassowary, Gulu Gulu, is as much a part of OFI as the many orangutans at our facilities.

A cassowary is probably the last thing you’d expect to find at the Care Center. While Orangutan Foundation International (OFI) specializes in orangutan rehabilitation, we also believe that all animals deserve a chance at a healthy, happy life. This principle informs our policy of never turning away an animal in need and has resulted in the Care Center acquiring a small number of non-orangutan animals, including one cassowary. 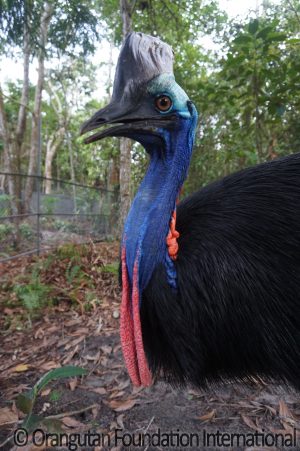 Before he lived in our care, Gulu Gulu lived at a zoo in Pangkalan Bun. Dr. Biruté Mary Galdikas was appalled at the inhumane conditions under which the zoo animals were kept. So she raised the funds and purchased the zoo for OFI and closed it! OFI, thus, acquired all the zoo’s animal residents. Those that weren’t able to be released or sent to other credible release programs were relocated to the Orangutan Care Center and Quarantine (OCCQ). OFI’s mission is to offer freedom to any individual animal capable of returning to the wild but for some animals that is difficult to do. Cassowaries are only found in New Guinea and Australia so releasing Gulu Gulu into a forest in Borneo was not an option. Instead, while we search for a cassowary rehabilitation program in Indonesia, the OCCQ provides a permanent home for Gulu Gulu.

Like some birds, cassowaries live a very long time- up to 50 years! While we don’t know Gulu Gulu’s exact age, we know he likely has many more years ahead of him. Providing a good, spacious home for him to live comfortably in for the rest of his days was essential.

Though Gulu Gulu has had his enclosure expanded before, we knew there was still room for improvement. His enclosure was as large as it could get in its current location, so a new spot was chosen on OFI’s OCCQ property. The new location allowed more space and incorporated more forest. Thanks to the kind donations and full-time labor of two long-term volunteers assisted by local staff, the new forest enclosure was built in a matter of weeks. Along with more foraging area, the enclosure also includes a Cassowary-sized bird bath so Gulu Gulu can enjoy a dip in the pool during hot days.

With the enclosure finished, the staff began to prepare for transport. Transporting a large animal is never easy and we knew we had to be careful. Cassowaries are reputedly the most dangerous birds in the world. Legends of their lethal attacks on humans are widely told in Australia and New Guinea. What makes the kicks so deadly is that the legs are armed with large, dangerously sharp claws! A cassowary can easily eviscerate a person with one kick of his/her powerful legs. Perhaps these stories hold some truth if the birds in question were harassed by humans. It only takes one look at Gulu Gulu to recognize his formidable power. However, after years of quiet care and undisturbed living at the OCCQ, Gulu Gulu has proven himself to be quite gentle and amicable. 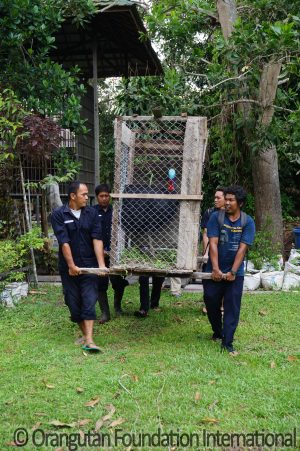 We decided the tactic that would prove least stressful for Gulu Gulu was to move him into a transport cage and physically carry the cage to the new enclosure. A transport cage with food inside was placed at the entrance of his old enclosure a day in advance so he would become comfortable with moving in and out of the cage. It took a bit of time, but soon enough Gulu’s caregiver was able to secure him in the transport cage. Cassowaries are very big birds and it took four men to carry the cage to the new enclosure. The distance between the two enclosures isn’t far but the journey caught the attention of many of the Care Center orangutans, who squeaked and lip smacked as we crossed in front of their sleeping cages. Orangutans are very keen observers and a massive black bird with vibrant blue and red coloring wasn’t going to fly under their radar! Orangutans continued to vocalize their excitement as Gulu Gulu was placed in front of the enclosure. When the cage door opened, Gulu Gulu stepped out with some hesitation but after a moment’s pause, he was off, running straight for the thickly wooded portion of the enclosure!

For the first several days, Gulu didn’t dare leave the heavily wooded back section of the new enclosure. He was very nervous of the more exposed front area which he avoided. Initially, he seemed thoroughly baffled by his water-filled bathing pool. But in time he adjusted and has flourished in his new surroundings. He now eagerly explores the front of his enclosure as well as uses his bird bath. He spends most of his day foraging for insects and resting in shady alcoves. 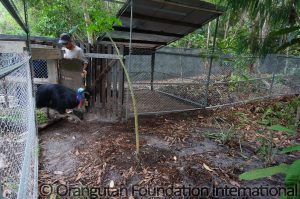 Cassowaries are rainforest birds, and it is not surprising that Gulu prefers to be under the cover of the canopy. His black feather coat is
surprisingly well-camouflaged against the dark undergrowth. It’s certainly not as easy to spot him in his new home as it was before but Gulu Gulu’s days as a zoo attraction are long over. He need not be on display for any audience!

Thank you to our volunteers who gifted Gulu Gulu his new home! A new enclosure is the biggest gift you can give to an animal that won’t be able to be released into the wild any time soon. But new enclosures are also much needed for our rehabilitant orangutans. The Care Center is an ever-growing facility. To accommodate the constant influx of orangutans and other wildlife, the OCCQ has to regularly expand current enclosures and build new ones. We cannot do this without the help from donors and volunteers. Please consider making a donation to OFI to help us expand our facility and improve the lives of all the animals under our care, including the orangutans.

Orangutan of the Month: Kusasi