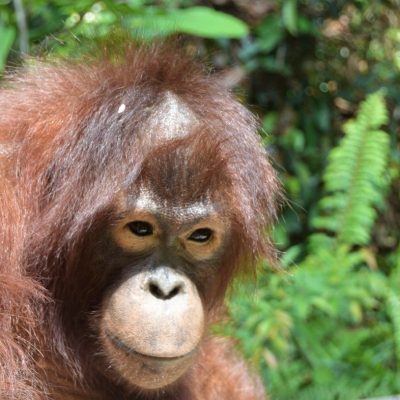 Four in the morning and dawn is barely breaking over the Bornean rainforest. All is quiet as the forest and the animals within begin to stir. The rising sun brings with it the caregivers from the Orangutan Care Center and Quarantine (OCCQ). It is an exceedingly early start for them. The working day normally begins at 7 o’clock onwards. Today is different. The staff must venture into the forest bright and early to collect someone who stayed the night. Tucked up high away in the trees, sleeping in a carefully constructed nest of branches and leaves is the orangutan, Wendy.

She has spent the night out in the learning forest, sleeping peacefully, after spending the whole day actively swinging and exploring the canopy. Some orangutans when released for the day simply don’t want to come back and prefer to stay in the forest. This is especially true on rainy days; rain can sometimes fall for hours on end. The apes prefer to find shelter in the trees and make themselves comfortable by building day nests. 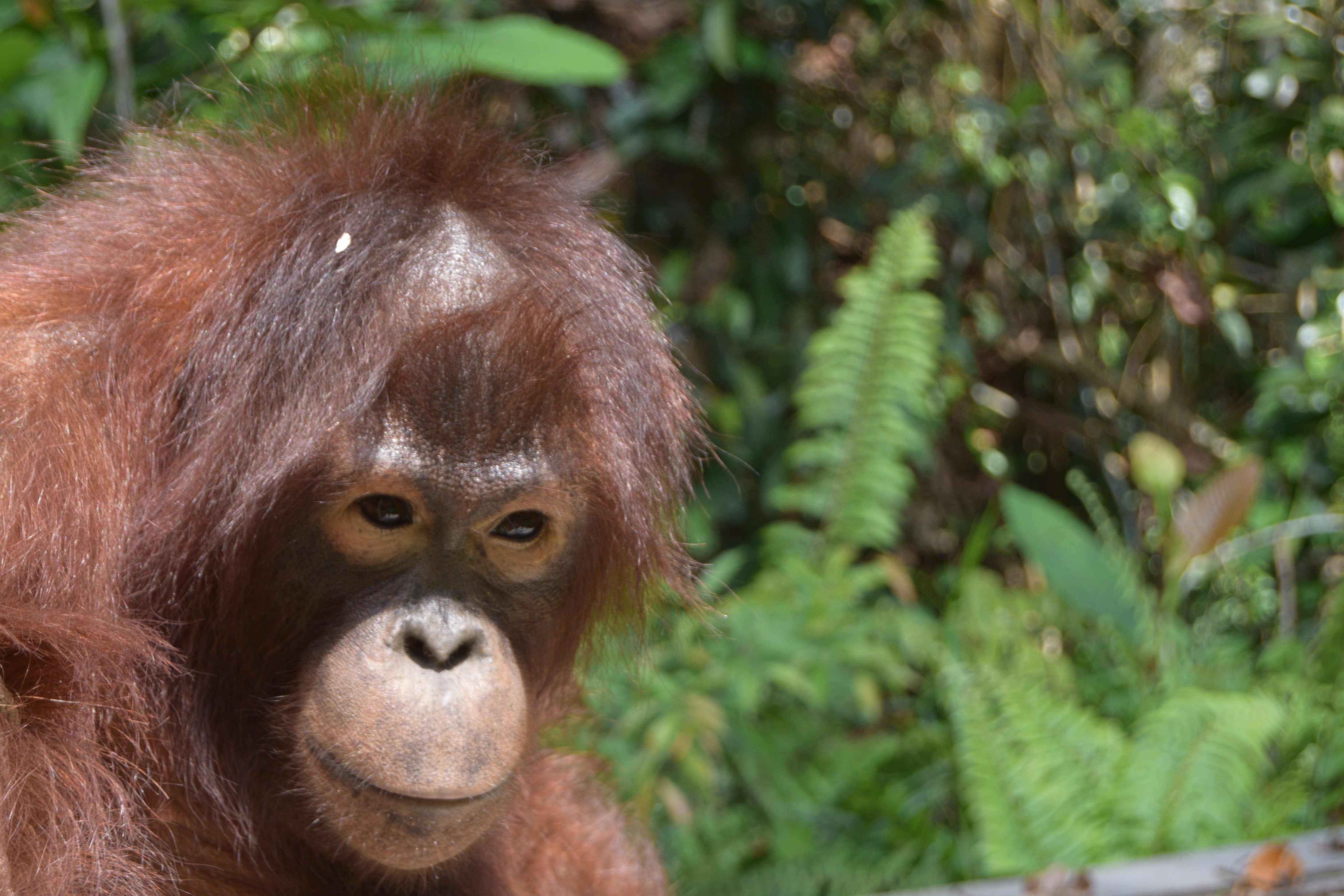 Caregivers stay with the orangutans throughout the day, monitoring their behavior and ensuring their safety. Once dusk arrives, the staff wait to see if orangutans will make a nest. This is the sign that an orangutan is ready to rest in place. When this occurs the orangutan can be left for the night as Wendy was, thus necessitating the caregivers’ early return in the morning. They make sure to greet Wendy as she awakens after a good night’s sleep.

Wendy frequently stays overnight in the Learning Forest now, preferring to be out as long as she can. This is positive development and is a sign of progress. Not only is she displaying excellent nest building skills but is also showing her independence and readiness to look after herself.

Like too many other orangutans before her at the OCCQ, her start in life was a sad affair. At less than a year of age, Wendy was forced to watch as her mother was caught on the ground as she moved between forests, chased down by dogs, and butchered for her meat. There are still people in parts of Central and West Kalimantan that consider orangutans a “game” animal, in the same way as impalas and buffalos are regarded in Africa. Taken from her mother’s arms, the same fate awaited her, to be butchered and eaten. Luckily one man, Pak Maskalin, saw what was to become of her and saved Wendy from this fate. He purchased her for just $20 and took Wendy home for a couple of months before he volunteered her to OCCQ. She arrived, small and thirsty, but otherwise in good health.

She was soon transferred to Pondok Dua where she stood out from the crowd, literally. When released from her sleeping enclosure, Wendy walked upright and folded her arms across her chest, in a very human-like manner. It is thought perhaps the trauma of missing her mother has made her develop this behavior as a coping mechanism. She only stands bipedally when walking. In all the other aspects of her life, she seems a healthy and happy orangutan. This behavior is a practice she continues to this day ensuring everyone always knows where Wendy is walking about. 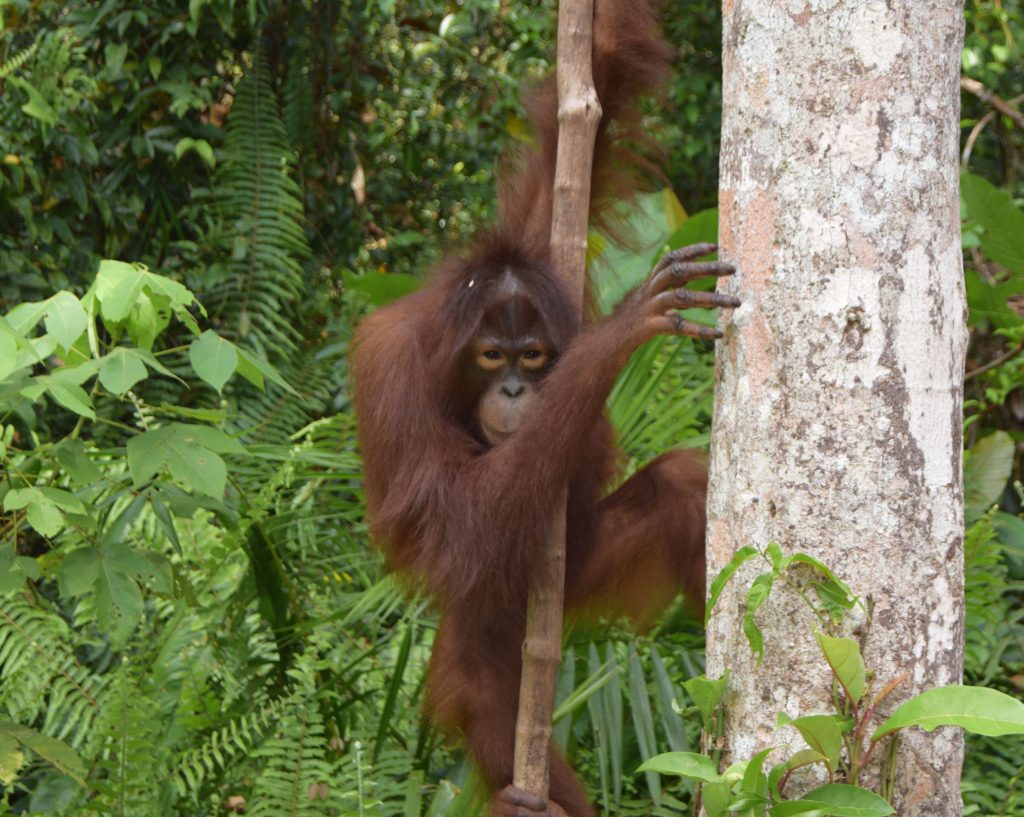 Now Wendy is in Pondok Satu, the facility for orangutans reaching their adolescence. She has never favoured the male staff so female staff at the Care Center are always the ones tending to her. Wendy shares her sleeping enclosure with females Roman and Best, with whom she gets along well. But once she is out in the forest, Wendy prefers her own company.

She has always been a very active orangutan bouncing around the forest with great gusto. She enjoys finding a nice area of her own in the forest, not travelling too far, but always reaching for the sky. All she wants to do is stay at the top of the canopy and slowly move around there to her hearts content. When her caregivers call to try and entice her down, she squeaks three times back at them to signal that she is fine where she is. Indonesian folklore says that orangutans have the power of speech but choose not to use it as then humans would try to make them work. Wendy always looks like she has something she wants to say but doesn’t say it.

Her caregivers follow Wendy patiently. She stops every now and again, pulling branches from around her to make a nest. Even from a young age Wendy proved herself to be instinctively talented at making both day and night nests. A nest foundation is constructed out of branches and twigs before the leafier branches are used to make a comfortable mattress to lie down on. “Pillows” and “blankets” of leaves follow for the night nest. You can imagine that these nests have to be able to support a fair amount of weight, considering fully grown females can weigh 65 to 100 pounds.  Wendy doesn’t always “stay out late” and does sometimes return to her sleeping enclosure allowing everyone to have a rest.

At the Orangutan Care Center Wendy has been allowed to cultivate her skills and, more importantly, be herself. She is a free spirit. However challenging she may make it for her caregivers on day release, we wouldn’t have her any other way.

Employee of the Month: Pak Ateng, a skilled Caregiver at the OFI Care Center

Orangutan of the Month for August, 2018: Robina