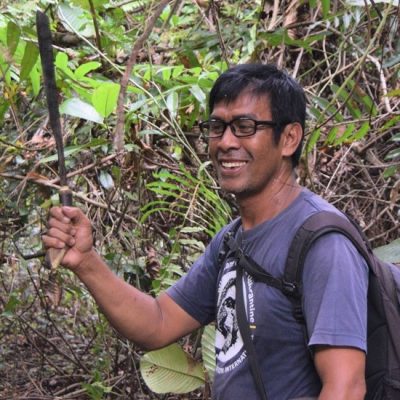 Pak Sia: Devoted to the Orangutans 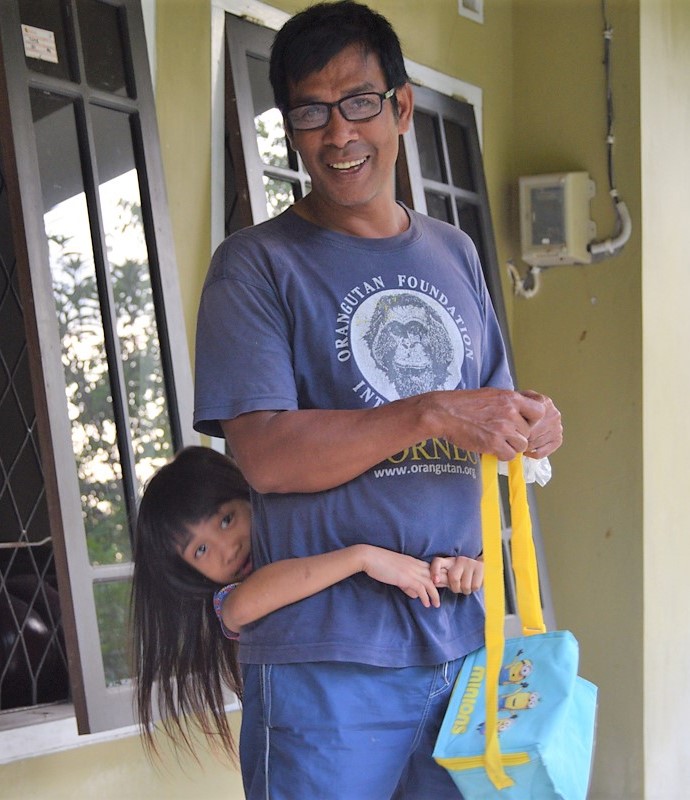 “When I was six or seven, I didn’t really understand orangutans.” Pak Sia remembers. It was around that time he witnessed a teacher at his school receive an infant orangutan, which was then given over to Dr. Galdikas and OFI. After witnessing this Pak Sia began his journey to learn more about orangutans. “People said that we can eat orangutan but I say no, orangutan is like me, like you.”  Following this, Pak Sia kept hearing stories and seeing photos from his cousin Pak Sehat, who worked at OFI in Camp Leakey. He remembers that Pak Sehat would invite him to come work with OFI when he was older. Even though his father envisioned a job in the government for his son, Pak Sia was already determined to work with orangutans. He has no regrets working with OFI.  His career has afforded him the opportunity to travel far and wide, and experiencing much more than he would have working with the government.

It was in 1989 that Pak Sia was finally able to started with OFI and was based in Tanjung Harapan helping care for infant orangutans.  He took the orangutans out each day on release and helped to construct huts to house them. By 1991 Pak Sia soon found himself working in Jakarta helping orangutans who had been repatriated from Taiwan and prepare them for their return to Borneo. In 1994 he finally moved to Camp Leakey and participated as a research assistant. This position required he spending his days following wild orangutans through the forest: cataloguing what they ate and what they did. This was something that came naturally to Pak Sia and he enjoyed the work.

At the request of Dr. Galdikas, he moved from Camp Leakey to the village of Pasir Panjang in order to help care for young orangutans who had just been moved there. He was sorry to leave Camp Leakey but would go where he was needed. “I always liked walking in the swamp with the orangutans moving quickly all around me. Sometimes I joke with my friends that the orangutans are “playing” tag with us. If they’re tired they take a rest for an hour or so, then begin “playing” again.” He also helped the young orangutans hone their foraging skills by giving them young leaves and pointing out the wild fruits that they could try.

His time at OFI has not been without its challenges. A former marriage was a price he had to pay when faced with an almost impossible ultimatum. “My first wife, she said if you love me please stop with OFI… she was always jealous. I say 100% of my life is with the orangutan.” He had made his choice years ago and this was him, take it or leave it. Ensuring his two sons from his first marriage were looked after, he always left the door open if they wanted to come work with him, and now his eldest son currently works for OFI in Camp Leakey.  “I have a good life with the orangutan, it’s never boring, I always enjoy.” Pak Sia takes a moment to reflect on what he would have missed out on if he had left the orangutans, something he could never contemplate.

He retains a soft spot for the orangutan Kristin, now released but watches over her daughter Krista, one of the few orangutans born at the Care Center. “When Krista was born, Kristin just gave her to me, I say okay.” Like a proud parent whenever he is at Camp Leakey and sees someone thinking about adopting an orangutan he will recommend Krista.

After settling for some years in Pasir Panjang and moving to the Care Center, more staff were needed to care for the orangutans. “Every month sometimes we have two more orangutans arrive, then another one and another, more and more,” Pak Sia says. It was during this period of increasing staff that he met his current wife, Ibu Iie. He worked closely with her and after a few short months they married.

Pak Sia remains one of Dr. Galdikas’s right hand men. At the Orangutan Care Center his day to day tasks as a Feeding Coordinator keeps him busy throughout the day, yet he always has time to help out if needed elsewhere. He will be found helping chop wood for the kitchen, collecting green branches for the orangutans, cutting grass and even cutting peoples hair!

Pak Sia doesn’t exactly bring his work home with him but he has also opened his doors and his heart to volunteers from around the world. Back in 2010 he built a small house where volunteers could stay while donating their time to OFI. His home cooked dishes, such as Indonesian favourites like Nasi Goreng and Gado Gado, ensure that the volunteers have enough energy to keep going. “I don’t need to sleep,” he jokes.

These days Pak Sia is a contented man: 17 happy years married with two more children. His daughter Monika is never far away, always at his heels. “She always misses me but sometimes she can be a little naughty. She wants to go everywhere with me, like shopping. She just wants chocolate milk and candy!”

During the devastating forest fires of 2015 that swept through parts of Borneo, many assistants journeyed to fight the fires. This meant experienced old hands had to be entrusted to look after more orangutans than usual while their caregivers were away and of course Pak Sia stepped up to the task.

After almost 30 years working for OFI Pak Sia says he has much to be thankful for. “I thank Dr. Galdikas, I’m healthy, I’m together with my family and I can always enjoy the orangutan. In addition to my blood family, I have many family – here, orangutans and also people from all over the world. I like Jakarta, Camp Leakey, Camp Filomena – everywhere. I like Pasir Panjang. In the Care Center I get to be close with the orangutan every day.”

Finally, where do you see yourself in 30 years? “If I can stay in my job it’s okay, I can work,” he replies nonchalantly. “I never want to stop.”

Berman: Orangutan of the Month

When it Rains, it Pours

Orangutan of the Month: Bali