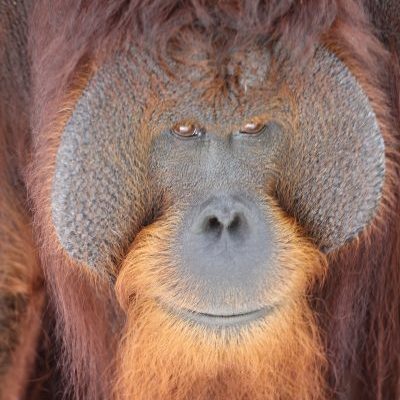 Orangutan of the Month: Jono

When migrants return to their motherland, are they more at home coming back to their land of origin or are they now more displaced? Humans all over the world grapple with this dissonance but in our search for belonging, we forget that we are not the only unsettled species. Today, a silent crisis in forests mirrors the migrant’s dilemma. Great apes, our closest living relatives, are being removed from their natural homes because of the illegal pet trade and massive deforestation. They are the innocent victims of our greed for Earth’s resources. Orangutans who survive displacement often languish in tiny cages for years as pets, until they grow too big for owners to “manage.” Many of OFI’s rescues arrive at the Orangutan Care Center and Quarantine (OCCQ) in Pasir Panjang, Central Indonesian Borneo, scared and alone. Denied freedom for most of their lives, some struggle to learn “normal” orangutan skills and behavior necessary for survival in the wild. Others adapt and may be mercifully returned to the forest relatively quickly. This is the story of one orangutan refugee who is learning to make his way back home.

Jono, an 18 year old male orangutan, received international attention last year because of the appalling conditions in which he lived for years. It is possible his mother had been murdered earlier in a timber estate, palm oil plantation or while local people were clearing the forest for their gardens. We don’t know for sure what happened to her, but what is certain is that orangutan mothers have never been documented abandoning their infants. Given this fact, it is likely that he was taken from his mother’s body after her death and transported to a buyer. Since infancy, Jono was kept as a pet in a suburb of Jakarta. As the infant grew in size, he naturally became harder to manage. His owners responded by wrapping his cage in sheets of metal wire to prevent an escape. It became difficult for Jono, now an adolescent, to even see trees and clouds through the meshing on his cage. His captors refused to release him, despite the pleas of animal welfare groups.

Roughly a decade of captivity had passed when Jono finally escaped. After days of roaming the tree lined streets of South Jakarta, he was retrieved and taken in by the authorities. For the next six years, he languished in a small cell in a holding facility near Jakarta airport. The cell lacked sunlight and fresh air and there was little to no enrichment for him to play with. Had a team at the Australian Broadcasting Corporation not turned the spotlight on his story in 2017, it is likely he would have remained there .  Emergency fundraising and a sympathetic staff at the KSDAE (Directorate of Nature and Ecosystem Conservation, Ministry of Environment and Forestry) enabled Jono’s passage home to Borneo.  Genetic testing confirmed that Jono’s origins were in Kalimantan, and he was welcomed home by OFI staff in April 2018 at the OCCQ.

Four months after Jono’s arrival at OFI’s OCCQ, it is overcast but already sweltering at 9am.  In a new enclosure, a massive pair of charcoal-colored hands fondles acacia leaves. Amber eyes, fringed with a shock of orange lashes, are set in a long face. Jono’s handsome features are contorted in intense concentration. Russet hair hangs off his body like a fringed jacket from the 1970’s. Today Jono is the picture of health but old habits do not die easily. This orangutan sits in a learned slouch as if he is still inside a transport cage. He makes himself small, which is no easy feat for an imposing fully-flanged male. When observed, it is clear that Jono is more sedate and less exploratory than his peers. Future visits will reveal that he is shy. Painfully so. 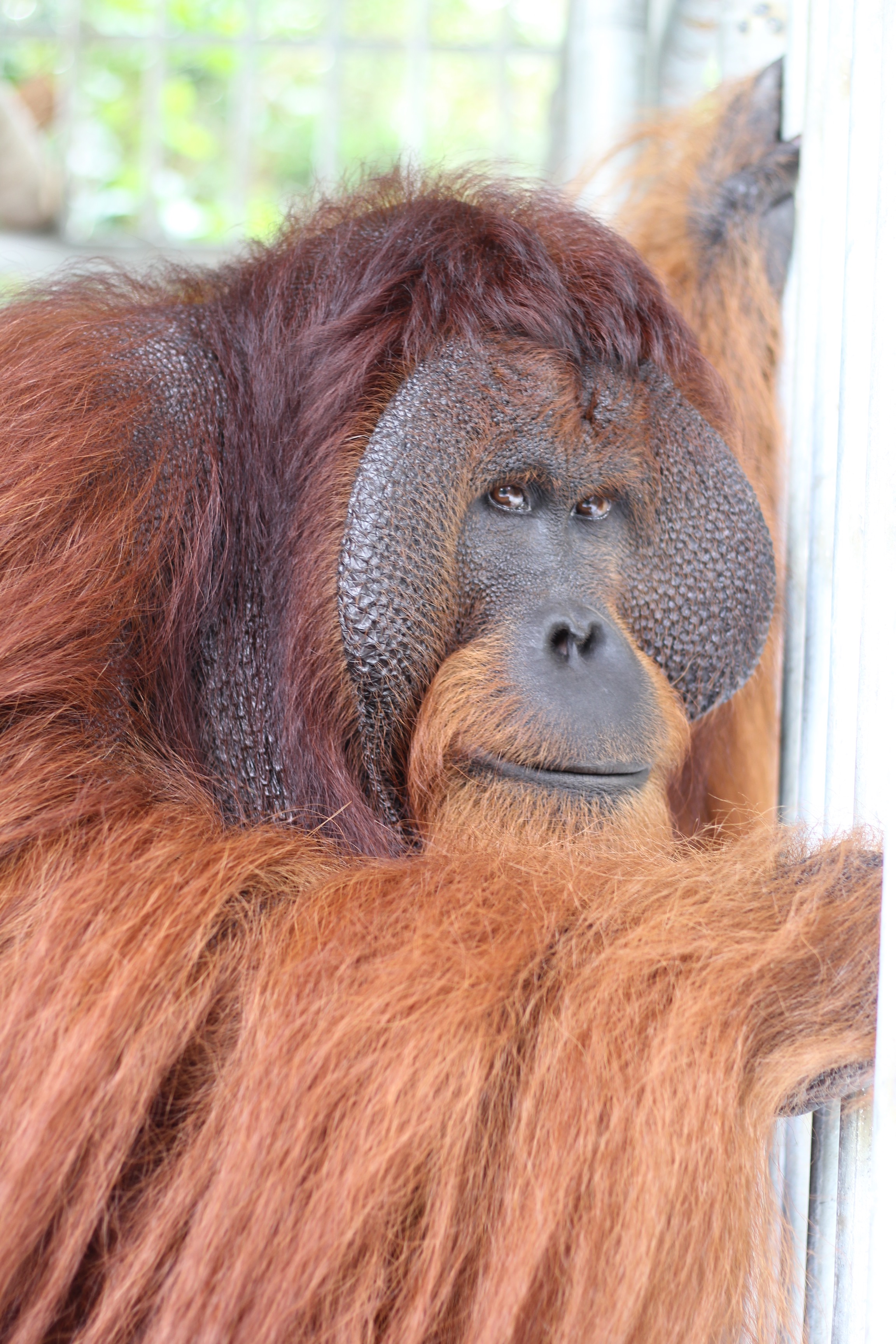 There is stillness, then there is Stillness with a capital “S”. Jono exhibits the latter. All orangutans are unique, but some common traits seem to manifest themselves at different life stages. The young ones possess energy, curiosity, sweetness and a tendency towards mischief. The older ones have temperance, wisdom, and purpose in their eyes.  Jono has a fourth, undefinable element. Jono’s is not a personality that can be framed in neat sentences. The migrant’s journey is imprinted onto his gaze and hints of a past best forgotten emerge through a round of his favorite game, hide and seek. Jono buries his face in his hands, positioning them behind the thickest bars of the enclosure; unambiguous in his wish to be alone. This adult male often transforms into a shy juevnile. He looks into your eyes without guile. His hands sometime clasp his head, appearing to try and forget a memory or disappear altogether. This is not the posture of orangutans in the sleeping cages around him, orangutans who have had the good fortune to be cared for by OFI staff for a much longer time. You almost feel compelled to ask him what his troubles are and how you can make them better. This is a gentle, troubled orangutan.

As reticent as Jono is, there are many joyful moments in his day that affirm that life is better than before.  His favorite view from his enclosure is a shallow brush of young trees bearing scarlet fruit. He can finally gaze at the sky and reach out to touch falling droplets of rain. He does so with wonder. The jungle rain falling sends him into a frenzy of activity. His long flame-colored hair fans out from his body as he swings from pole to platform.  Jono has graceful, measured movements, and the sight of him moving is magnificent. A deep noise rumbles forth gently from his chest, like distant thunder. Jono’s vocalizations recall the sound of the underwater engines of motorboats, deep and subaquatic. As quickly as it left, melancholia repossesses him again after this exercise in activity. He grows quiet and covers himself up with a straw mat, waiting for the storm to pass.

Jono is now able to swing like an orangutan after being caged like a bird, and his delight is palpable. He takes the long route at mealtimes, always swinging over to eat instead of simply fist-walking to his food.  He is a deliberate eater, as if feeding himself is a new act. Many orangutans will carelessly peel a banana and cram all of it sideways into their mouths. Jono tears a fold of banana skin and delicately munches the little stem then pauses to take in this simple act.  Just as dazed travelers must re-learn the tastes, smells, and sounds of their motherland, Jono must rediscover his joy. OFI staff take heart from knowing that a resilient spirit can weather the most arduous journey when home is in sight, and finally, Jono is home.