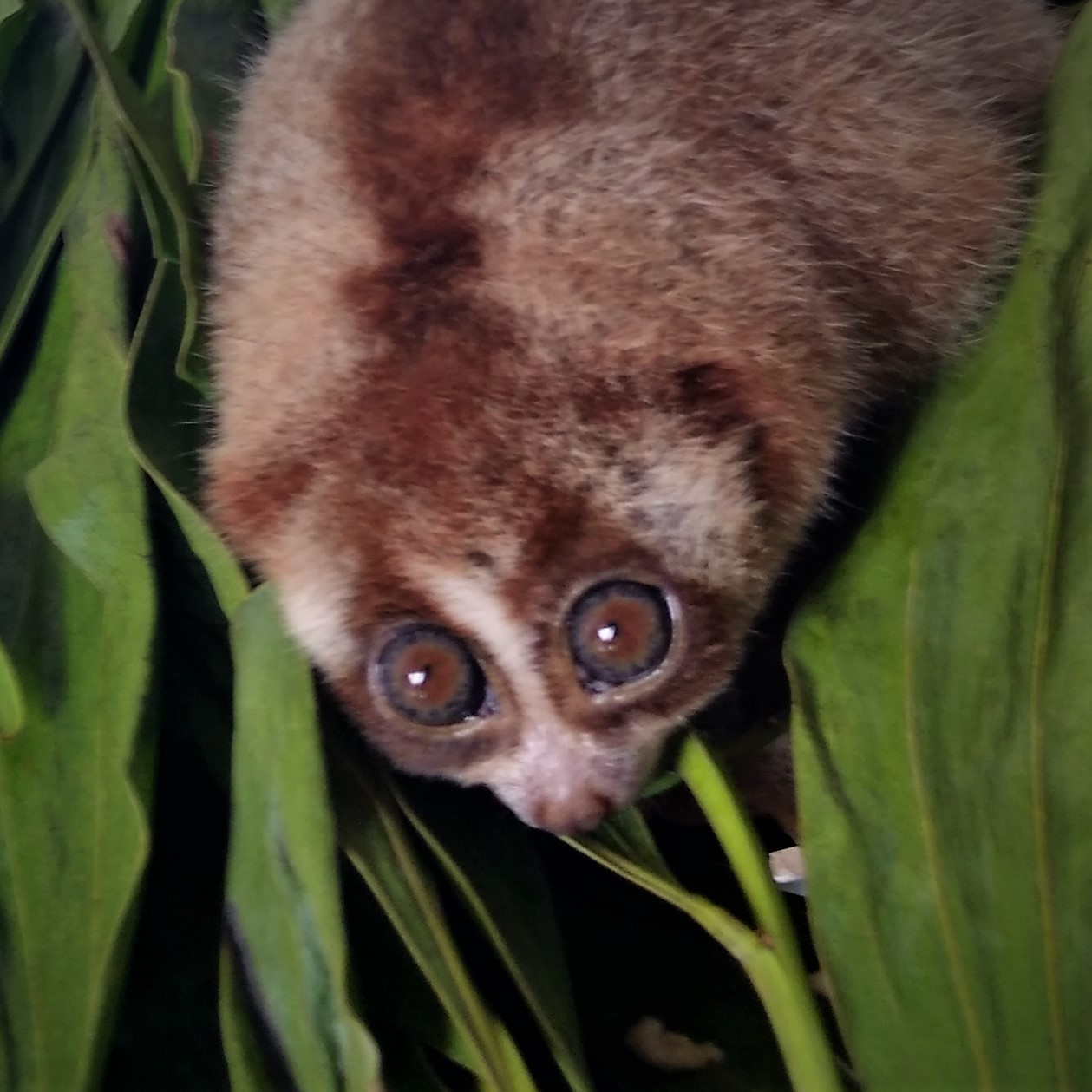 Dusk approaches along the banks of the Sekonyer River in Tanjung Puting National Park, the gateway to Camp Leakey. Orangutans have already made their nests and hunkered down for the night. In the national park, especially during the high season in July and August, holidaymakers slumber on the kelotoks (houseboats used for tourism) parked on the river’s edge. Troops of the charismatic “Big Noses of Borneo,” proboscis monkeys, also weave their way to the waterside to settle down for the night; here they are safe from arboreal predators who can only approach from one side.

Night is the time for dreams and contemplation, the darkness hiding the restless unknown. The light is snuffed out and it is now the nocturnal natives’ turn to emerge. With up to 40 million species inhabiting it, the forest is a bustling metropolis. The cicadas subside and a peaceful quiet night brings with it a spectacular light show that makes it seem as if the stars themselves have fallen out of the sky. These lights come from the fireflies, winged beetles blinking in the night to attract mates.

At the Orangutan Care Center and Quarantine (OCCQ) tasks are still being undertaken. At all the various facilities there is at least one person watching over the orangutans and other animals. Baby bears and orangutans may awaken during the night and cry out for attention.  A common sight near the OCCQ kitchen or around the forest area is the Bornean Keeled Pit Viper. While they lounge around lazily in the low vegetation during the day, they spring into action at night, hunting for small vertebrates. Smaller animals such as the slow loris – another night crawler, also emerge. 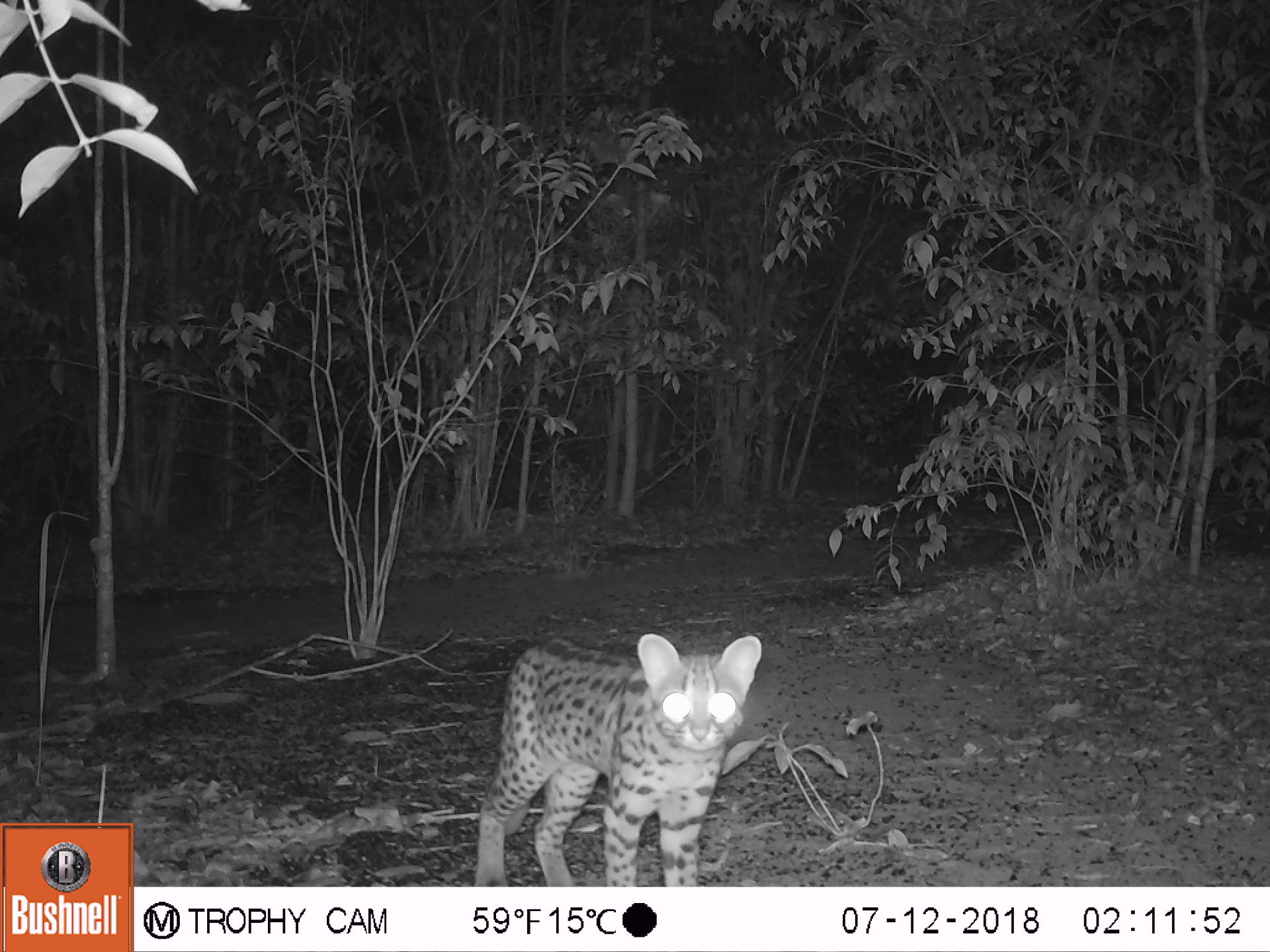 In early 2018 an injured slow loris was brought into the clinic. OFI never turns away an animal in need. The slow loris had a badly wounded right hand that was already necrotic. Caution was necessary and thick gloves were used when handling him.

Slow lorises are one of the few mammals with a toxic bite. Glands on the underside of their armpits secrete venom that the slow loris licks, combining the poison with their saliva to deliver a nasty bite to ward off predators. The “curse of cute” besets this species with their large soulful eyes and teddy bear like ensemble. They have long suffered as victims of the pet trade which, despite laws banning it, is still ongoing.

An operation was required for this loris so the necrotic hand could be amputated. After a suitable recovery period the slow loris was soon able to climb again using his remaining hand and two feet,  and was able to be released back into the wild. Once placed into one of the trees, he paused to inspect the vista surrounding him before climbing high into the canopy. You can watch the video here: https://www.youtube.com/watch?v=vlcLfLAgL_Q&feature=youtu.be

Meanwhile, back down on the forest floor along OCCQ’s boardwalks, our wildlife camera traps capture other night activities. During the day humans and orangutans bustle back and forth along the boardwalks but at night, creatures such as the greater mouse deer and the Bornean leopard cat (not to be confused with the clouded leopard) roam freely. 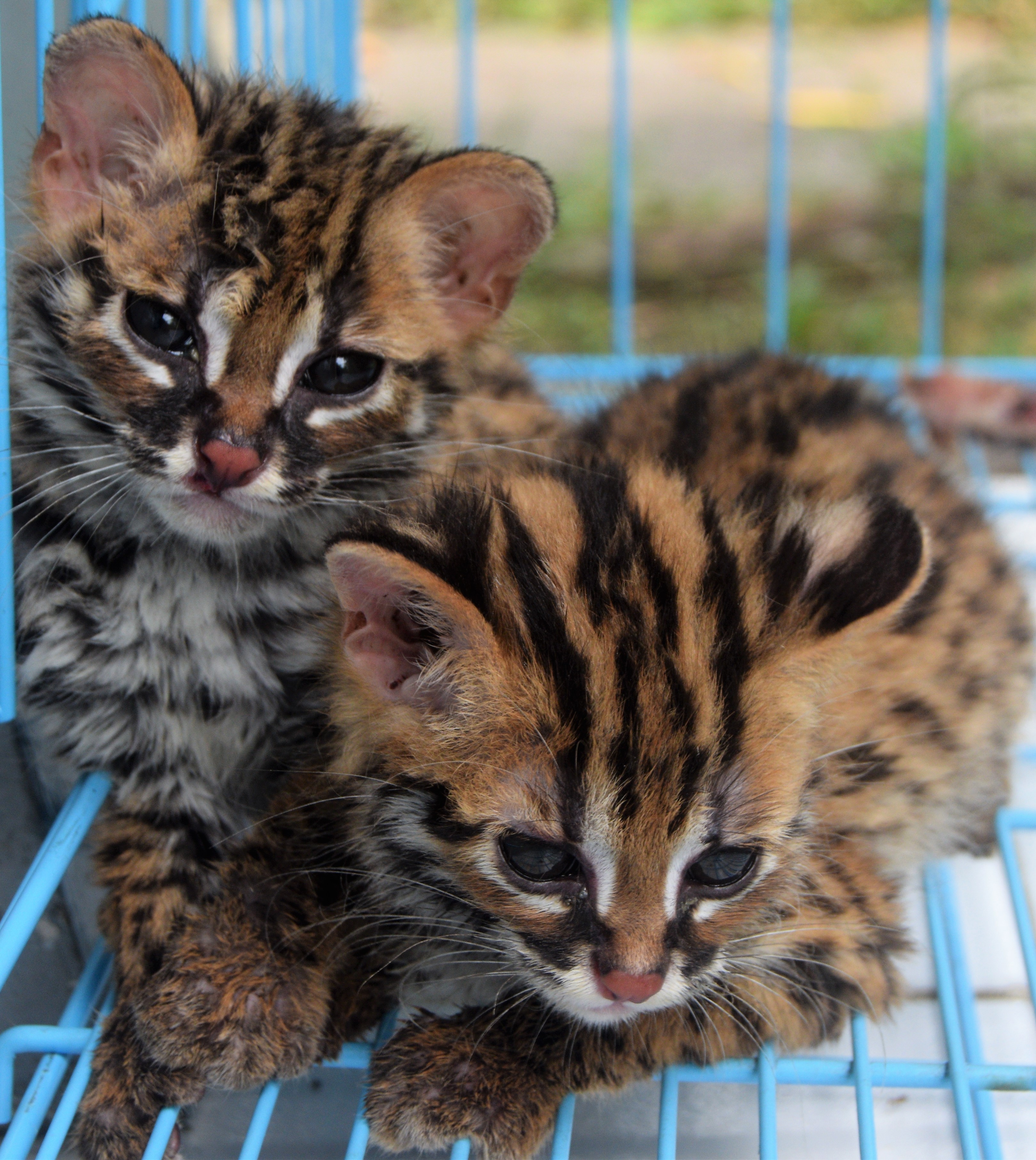 At night all cats may look black, but the leopard cat has an alluring patchwork fur coat. These leopard cats, known locally as the “Kuching Hutan ”, are mostly active at dawn and dusk. They are approximately the size of a domestic cat although they are much sleeker. These carnivores are widely distributed throughout South East Asia. They are a highly adaptable species and enjoy great success in the wild.

In early 2018, OCCQ received a call from a local hotel in the nearby city of Pangkalan Bun. They had “something” that they wanted picked up. The “something” turned out to be two Bornean leopard kittens.

They were brought to the Care Center and spent several months under OFI’s care. A hollowed out log was provided to them for sleep and shelter. They kept each other company and guarded either end of their log. Hunting skills were taught using techniques such as encouraging them to chase meat attached to the end of a string. Before too long, there wasn’t anything more that these forest cats could learn from humans. They needed to be released in order to thrive, and so the log that they called home was left on the forest edge. The leopard cats refused to leave their log while people were still in the vicinity, so they were given the space they required. They didn’t wait until night to leave. Upon inspection a few hours later, the leopard cats had vanished, as mysteriously as they had arrived.

Another type of “cat” housed at the OCCQ is also predominantly active at night and known as the binturong or “bearcat”. Not quite a bear and not quite a cat, it is a member of the civet family and is listed as vulnerable on the IUCN red list. earcats characteristically have long whiskers, thick coarse hair and dark yellow eyes pointing forward not unlike a lemur . Their prehensile tail is almost as long as its body and is used as an extra hand for climbing in the tress. They are slow but can move quick enough if food is nearby – especially if it’s something like chicken. 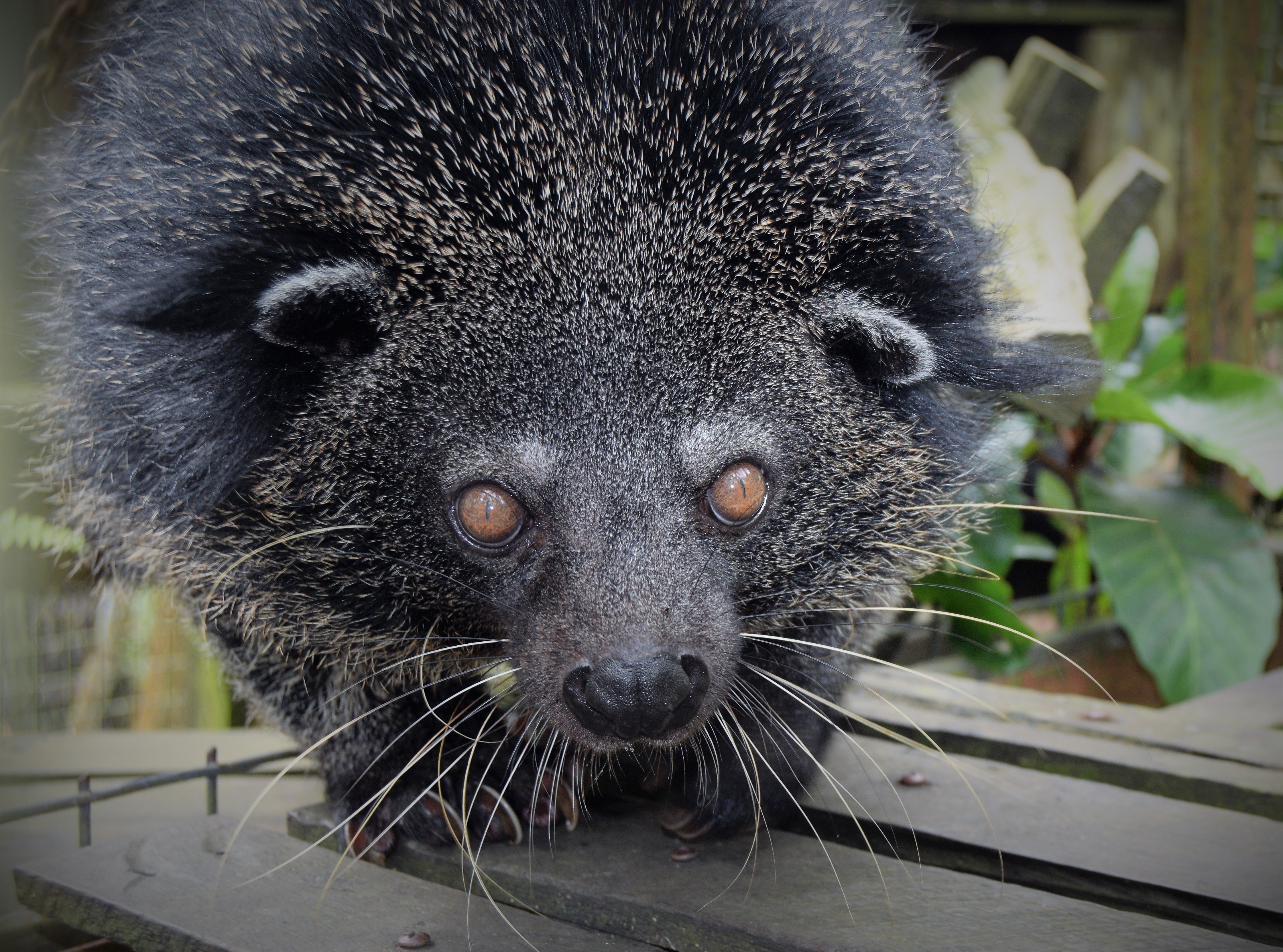 It is one of the more curious creatures to emerge from the rainforest. One thought that often comes to mind when passing the enclosure of this animal is, “what is that smell?”  Theirs scent is similar to that of popped corn, much different than the musty scent given off by orangutans. 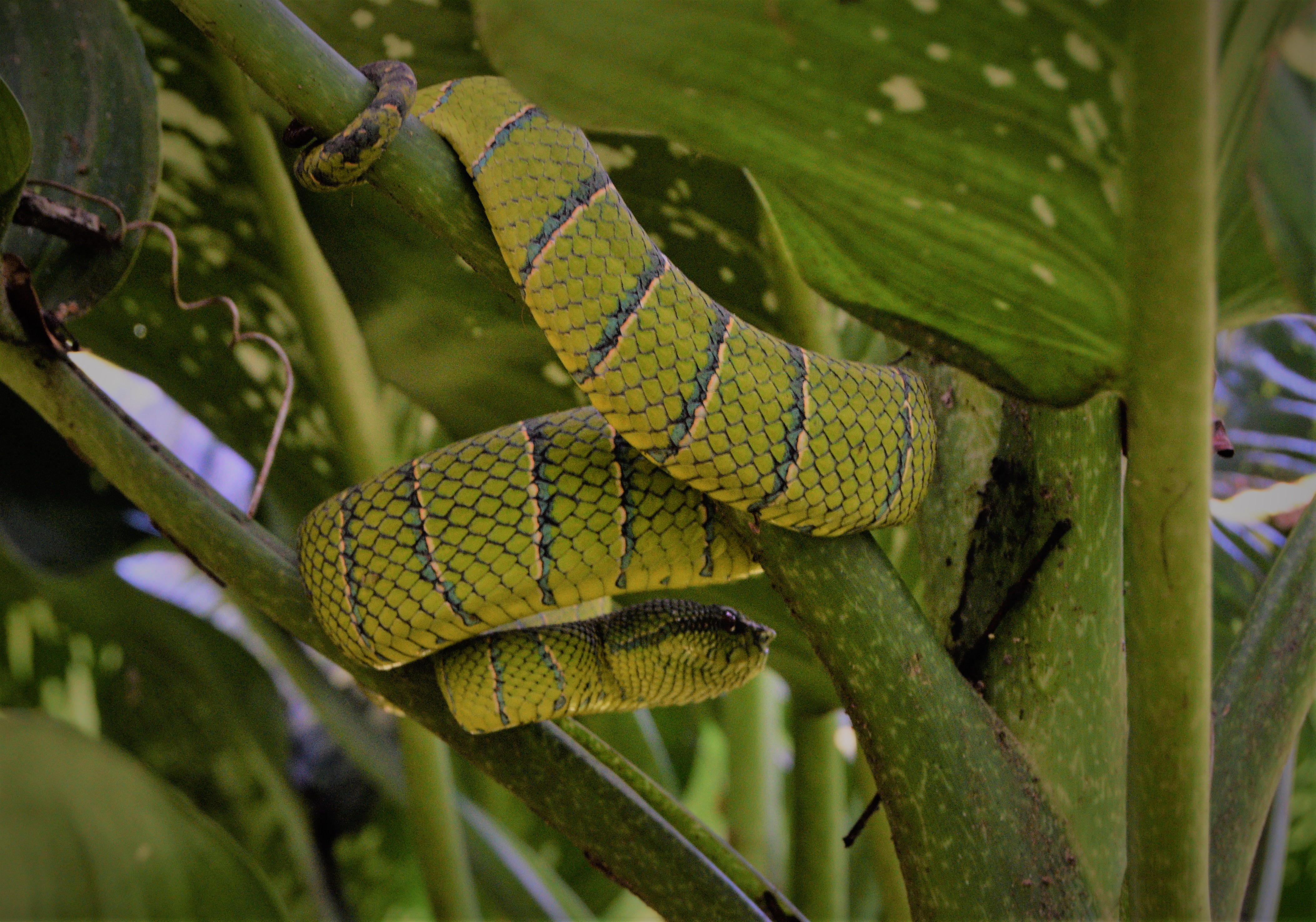 All interesting things must come to an end and as dawn approaches, the day dwellers begin to awake.  Gibbons welcome the day with a whoop, the orangutans leave their nests, the proboscis monkeys move away from the river’s edge, and OCCQ staff arrive en-masse.

The creatures of the night retreat into the shadows; finding nooks and crannies, holes and dens where they can hide away. Though they must wait until the eternal dance between night and day once again moves in their favor, that wait won’t be long.  Just as we know the sun will always set, the night will most assuredly return.