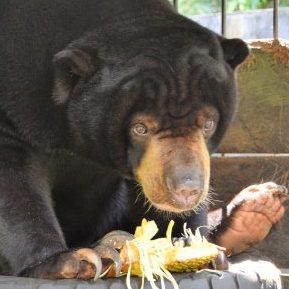 Raja is one of those bears who always appears to be grumpy.  This is due to his fleshy forehead, common among sun bears, that produces several layers of deep-seated wrinkles. However, beneath this seemingly frowning face are two innocent dark brown eyes that show no sign of malice whatsoever. Admittedly, at first Raja’s appearance can be somewhat intimidating, but sometimes it is the seemingly most intimidating individual who is actually the most timid.

Sun bears are the smallest of the eight bear species found in the world. Adult sun bears average between 30-80 kg (66 – 176 lb), while by comparison American adult male black bears can be up to double that size at 140 kg (308 lb).  By Malayan sun bear standards, Raja is a big bear. He arrived at the Orangutan Care Center and Quarantine (OCCQ) in Central Indonesian Borneo weighing about 100 kg (220 lb). 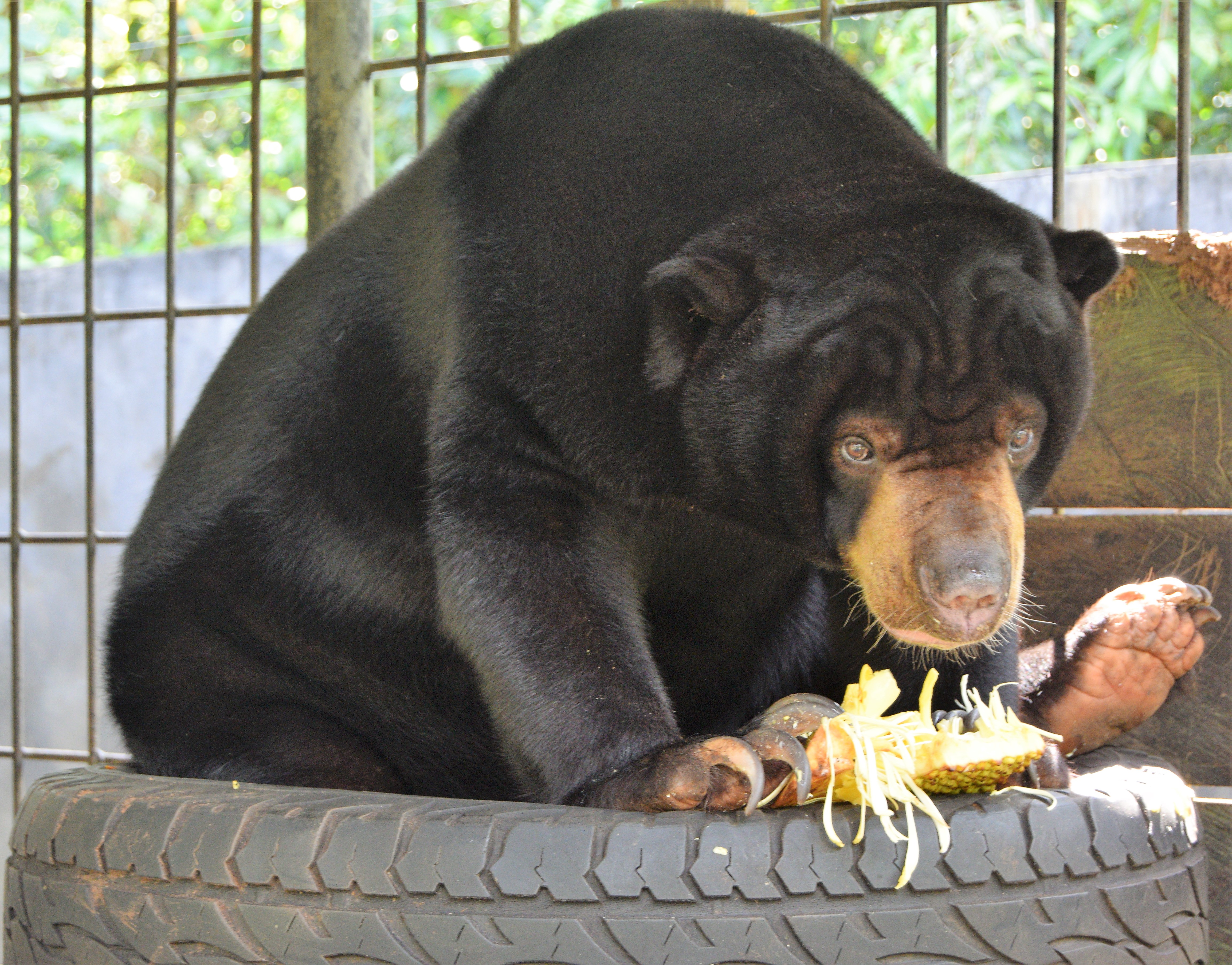 Raja spent his whole life in a small cage and was thus accustomed to a completely sedentary lifestyle. For the first few days at the OCCQ, he didn’t seem to understand that he was now in a much larger enclosure and hardly moved a muscle. He stayed completely stationary in one corner of his enclosure. Most of the sun bears who arrive at the OCCQ immediately take advantage of finally being able to occupy the biggest space they have ever known. For Raja, it took several weeks to embrace this new and large space.

Aside from not moving much, Raja also didn’t consume much fruit at the beginning. In fact, he didn’t seem to recognize fruit as food at all, presumably because he was fed inappropriately by his original captors. So, an OFI volunteer sat with him every day and encouraged him to eat bananas by peeling it in front of him. Eventually, Raja began to show interest and began eating bananas, along with other fruits like papaya and rambutan. In the wild, the sun bear diet is mostly made up of fruit, various forms of vegetation, honey, small vertebrates, and several invertebrates including termites and ants. They are also unfortunately partial to crops such as palm oil and coconuts, which is what frequently brings them into contact with farmers who sometimes kill them as “pests”.

Today, Raja will eat pretty much anything that is put in front of him, but his diet is controlled and monitored. Raja has lost some weight since his arrival, but that’s okay, because he can afford to lose a little!  Due to the physical difficulty of actually weighing him, it is hard to measure how much weight he has actually lost but OFI staff have surely noticed the difference. While he isn’t a fan of leafy vegetables such as kankung (similar to spinach) which he will rake out of the way without a second thought, he does enjoy corn on the cob and devours eggplant. In the mornings he receives dog food – helping provide protein, a healthy coat, different taste, and a variety of nutrients. In the afternoons he receives fruit and vegetables. Sometimes when he sees another bear getting food, he can be a little impatient and will vocalize his displeasure making it seem as though a major confrontation is taking place. For this reason, making sure all the bears receive food at the same time is important.

Occasional enrichment treats are delivered too, providing mental stimulation and engaging his numerous senses. Enrichment often consists of frozen honey or peanut butter spread into holes in logs or large branches. Raja will dip his claws into the hole to scrape the peanut butter out. Raja is a curious bear and always approaches the sides of the enclosure to investigate new smells. Unlike most bears who tear apart logs as soon as they can lay their paws on them, Raja prefers to hold a log and experience its aromatic qualities. He will inspect it thoroughly before carefully digging his claws in, chipping away at the outer bark. 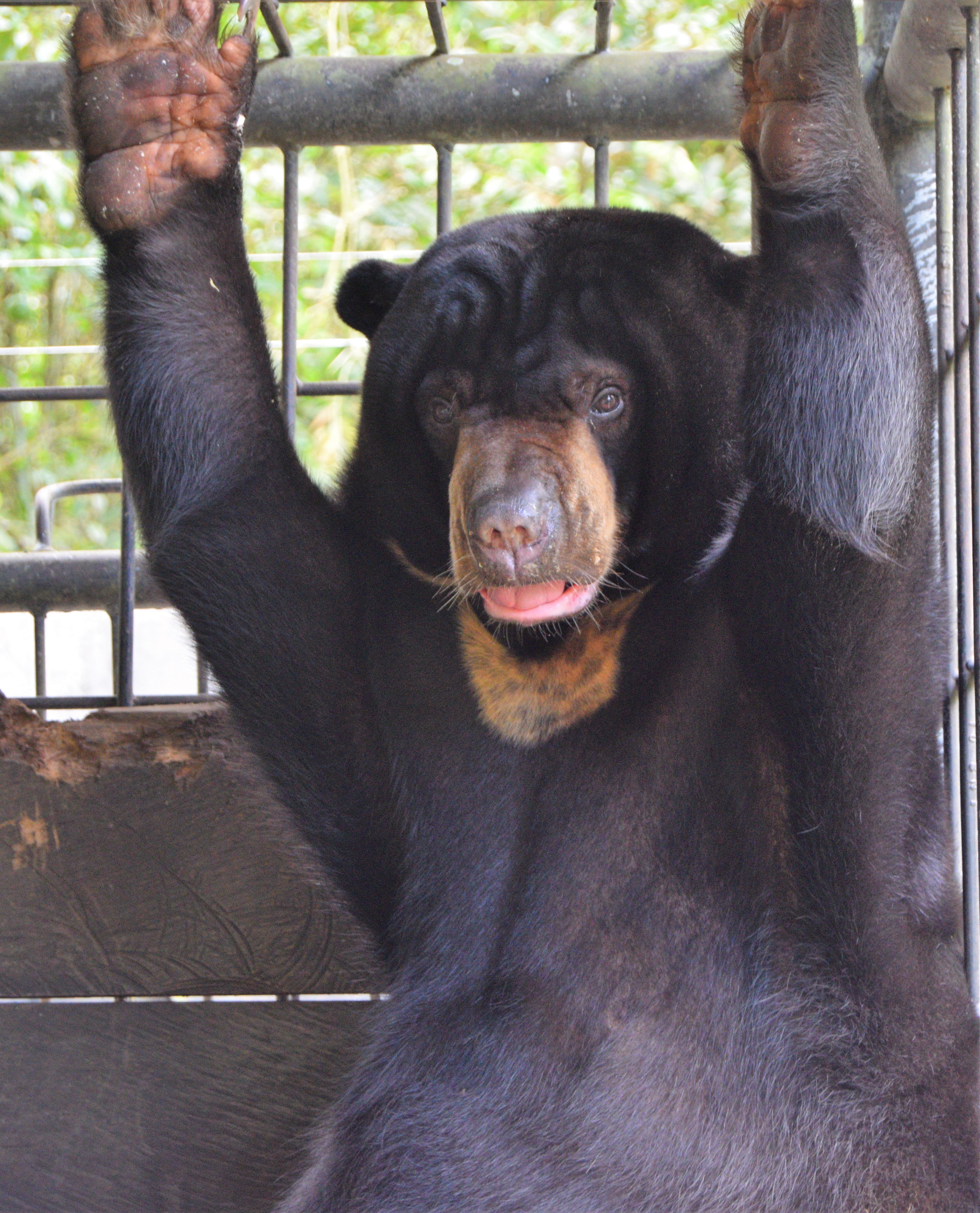 Raja shares his enclosure with two OFI bear elder stateswomen, Desi and Hilda, who were already at OCCQ when he arrived. The two of them must make him feel a little outnumbered but he never acts aggressively.  When Desi growls at him he clucks to display his peaceful intentions meaning no harm and sometimes even rapidly retreats.

While Raja is merely tolerated by the older Desi, Hilda is much more accepting. He has become Hilda’s buddy. The friendly pair can be seen together on the platform, rolling around and playfully biting one another. Both bears are large adults, so they can really make some noise when they play together. The noise could be misinterpreted as indicating aggression but, in reality, Raja and Hilda are enjoying each other’s company.

Raja spends much of his time up on the platform of the enclosure. The height provides him with a feeling of security. That is his domain. However, it wasn’t always like this. When he first arrived to the OCCQ it took him a whole month to work up the courage to climb the distance from the ground to the platform. If Raja isn’t lying on the platform he will sometimes sit upright, lean back on the enclosure wall, stretch upright and raise his claws above his head hooking them onto the roof. He will maintain this position for a while, just chilling out. Other times he may simply lie on his belly with his head down and his tongue lolling out.

Even though there is a whole hectare of forest for him to venture out into, Raja stays close to home. He will sometimes go and lay in the forest on a particularly hot day but prefers to stay in the communal enclosure, near where the food is given out. He lets his caregivers bring the forest to him. As with the orangutans, bears receive branches at the end of the day. He has his spot on the right side of the communal enclosure where he likes to “sort through the mail” and play around with the green branches.

Raja has settled into life at the Care Center and is able to enjoy the amenities. A retiring character and not a big fan of change, he is a bear of routine, enjoying consistency, and his caregivers are more than happy to provide this for him.

Charlie: Charming Orangutan of the Month