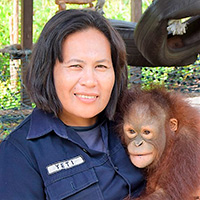 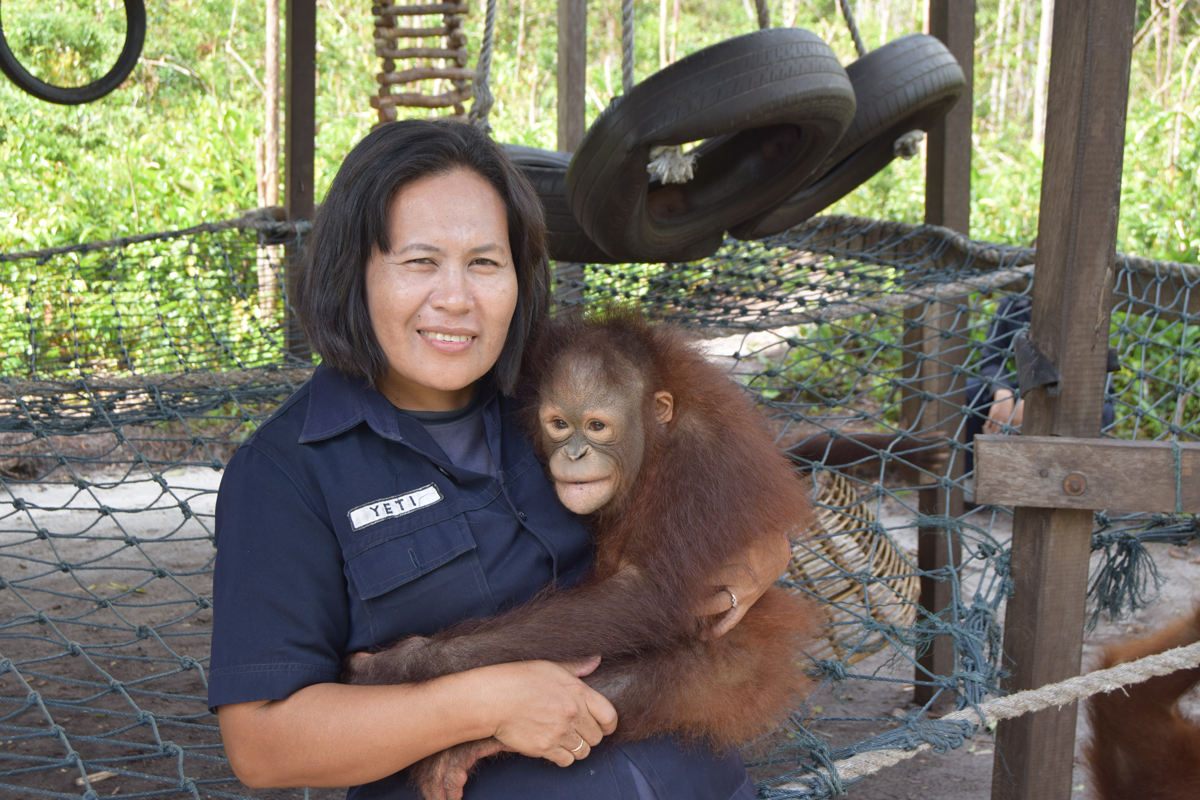 When walking along the boardwalk en route to Camp Danielle, a facility at OFI’s Orangutan Care Center and Quarantine (OCCQ) in Borneo, you may hear what sounds like exasperated shouting followed by laughter. These are the sounds of the daily release of young orangutans in the Infant Playground and the Learning Forest. Chief among the laughing caregivers is Ibu Yeti, the coordinator of Camp Danielle since April 2016.

She is always happy to chat. Her face seems stern at first, but lights up as she smiles. Her philosophy is “It’s good to share; you shouldn’t keep it all inside.” She has shared over half of her life with the wild born ex-captive orangutans she is helping rehabilitate. When it comes to talking about herself she is naturally self-effacing. About her admirable English language skills, Ibu Yeti charmingly remarks “I’m a little bit good.” She occasionally spends time talking with various Western volunteers and has even bought an English dictionary to practice. This is her way of self-improvement.

As she talks, Ibu Yeti will grab a stick from the ground and begin writing in the sand to demonstrate what she is saying. With a smile on her face, she mentions having to sometimes raise her voice at these young orangutans, “I love the orangutan but in my heart I don’t want to spoil them. Sometimes if they get too close to people, it’s not good for them. Maybe it can make them not so good at climbing. I want so they can be released and become wild.” She has the orangutans’ best interests at heart.

She remembers her first day on the job, starting at OCCQ way back in 1999. The OCCQ itself was still in its relative infancy, housing only 30 orangutans at the time. Ibu Yeti started out at one of the forest facilities. At the tender age of 19 and fresh out of high school, she started by carrying big baskets of bananas and other fruit into the forest on her back.

She was no stranger to the world of orangutans, having grown up with her mother working as a cook at the OCCQ. Ibu Yeti spent many happy childhood days there. Her response as to what her motivation was to work with OFI is very unassuming: “I thought Dr. Galdikas and the staff are very nice people. Maybe I could work there. It’s close to my parents and in my village; it’s nice.” Animal loving extends through the family with relatives peppered throughout OFI and her husband working in the forest protecting turtles as well. It boggles her mind that her own indigenous Dayak people would even consider eating orangutans.

Talking with Ibu Yeti, it appears there isn’t a part of OCCQ where she hasn’t at one point worked in, helping at practically all the various facilities throughout her time here. A broken leg couldn’t even prevent her from coming to work. A motorcycle accident put her out of action for a few months but soon enough she was back at the Care Center seeing what she could do to help. At this time, she worked in the Quarantine facility helping in the medicine room, cleaning equipment, and dealing with new orangutan arrivals. Her leg still gives her some pain so she can’t help as much in the forest these days, but she won’t let this stop her.

“Is there a particular facility you enjoyed working in more than anywhere else?” I ask.
“Everywhere is good; every day is the best,” she states, clearly just happy to be involved. “I want to give a good job, give something good for Ibu Birutė. If I’m not useful then I should be told to go away!” 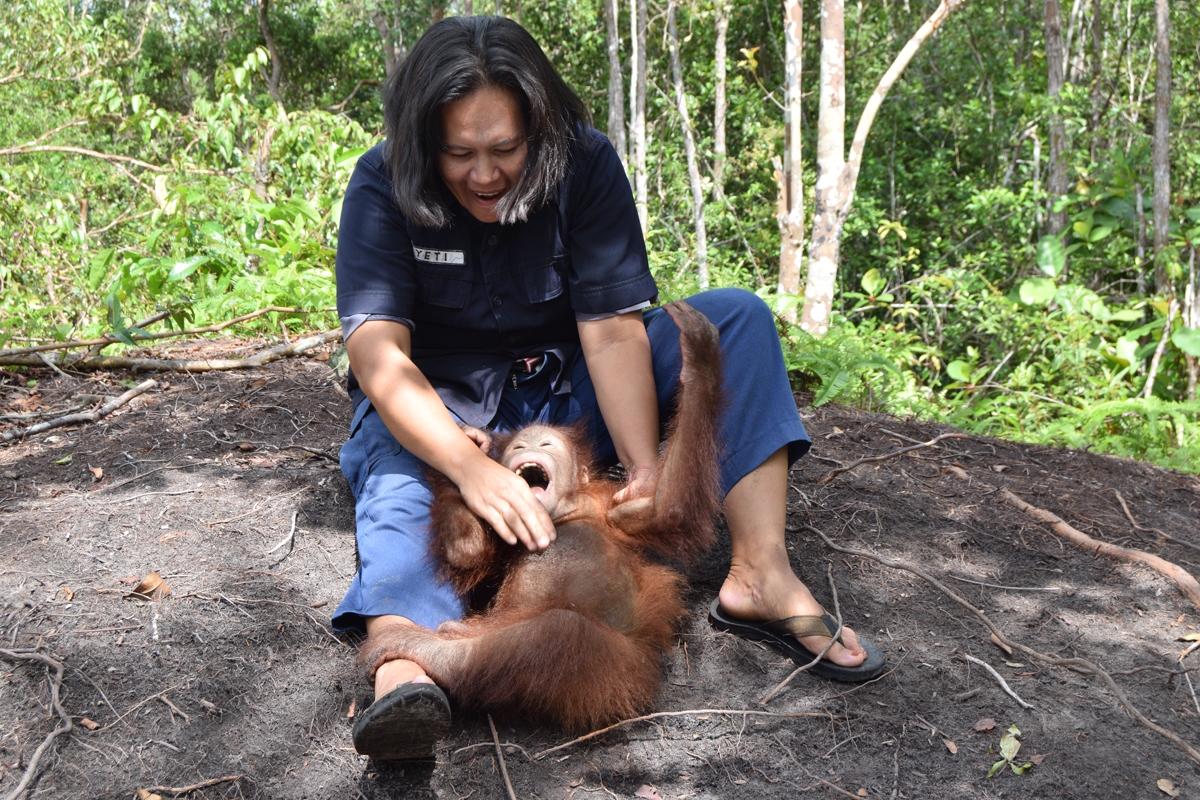 Currently, there are 18 infant orangutans at Camp Danielle. As well as watching over all of them and supervising the local staff, Ibu Yeti has personally “adopted” five of them. Mumui, Jennifer, Otan, Jeffrey Junior, and Rimba Raya. She says, “If they are sick it hurts like it is my own baby.”  Jennifer is especially close to Ibu Yeti. Little Jennifer can get very jealous if she sees Ibu Yeti interacting with anyone else, rushing over and hopping onto her. When Ibu Yeti is talking, Jennifer sometimes puts her hand over Ibu Yeti’s mouth, telling her to be quiet and not to pay attention to whoever Ibu Yeti is having a conversation with!

When not having to keep these young ones in line, Ibu Yeti is extremely easy going, responding to the needs of each individual. For instance, when the rest of the orangutans return at the end of their session in the learning forest, one of her “children” Otan often simply does not want to come in. He will keep playing and playing in the jungle gym. Rather than just force Otan back, Ibu Yeti allows him to stay. She knows he will come back to his sleeping quarters in his own time, normally when he is hungry. Then she is ready to feed him.

Ibu Yeti has warm memories of previous orangutans whom she helped raise and release into the wild, from her first baby orangutan Ogek to Joanna whom she wistfully remembers. “Joanna liked to jump from branches straight into the water, so beautiful.” Watching orangutans is one of the things she enjoys most.

Being the eldest daughter in her family she balances a busy home life looking after her own family along with her duties at the Care Center. It’s always a very early start for Ibu Yeti in the morning but yet this is one of her favourite times of day. “I love watching the baby orangutans and seeing what they’ll get up to next. Every day is different.” All her problems melt away when she is with them. Her time off has also involved orangutans. She fondly recalls visiting Camp Leakey to see the wild orangutans there and watching them in wonder.

She has truly found her place. “It’s amazing here; I never want to work anywhere else.” And when asked what it is now that motivates her she reiterates, characteristically pragmatic and modest, “I just want to do a good job, something that is right.” We can agree that helping orangutans is definitely something right.