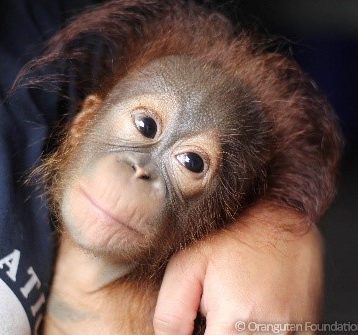 We need your help to prevent further wild orangutan population decline. Donate now to help us purchase land that will reduce forest destruction and fragmentation of rainforest habitat.

Today I am reaching out to make an urgent and personal appeal to you.

As a supporter of Orangutan Foundation International (OFI) you are probably aware of how critical the current situation is for orangutans in Borneo.  Each day hundreds, if not thousands, of acres of orangutan rainforest habitat are lost to deforestation.

Saving wild orangutans from extinction is intertwined with saving their rainforest habitat!

The reality in Borneo is that palm oil plantations and industrial timber estates for pulp and paper exist where pristine rainforest recently stood. These plantations of deforested land create forest fragments: islands of forest habitat that restrict the movement of orangutans and inhibit the preservation of Borneo’s magnificent biodiversity.

Limited availability of resources such as food, water, and shelter for orangutans and other endangered wildlife trapped in these slivers of forest fragments contributes to staggering population decline among orangutans and loss of genetic diversity.  Sometimes there seems to be no forest left at all! Sometimes wild orangutans are trapped in plantations as vast as hundreds of thousands of acres. Forest destruction and fragmentation force orangutans to travel through deforested areas in search of resources, making them vulnerable to interactions with humans and putting their lives at risk in order to simply exist!

We later discovered another body of a wild orangutan, also an adult male orangutan, in the middle of the national park where we work. This wild orangutan had died after eating a large meal of river vegetation after suffering from prolonged starvation in the remnants of a forest burned in 2015.  He was a victim of human activity as was Baen.

In the severe drought of 2015 fires spread from the edge of the park where fire was being used to clear forest for plantations.  These slash and burn methods caused fires that destroyed tens of thousands of acres of forest in the middle of the national park. Park personnel and OFI rangers fought these fires in 2015 but were only able to contain them after much forest was destroyed.

We need your support now to buy and preserve essential habitat that will connect forest fragments to create wildlife corridors. To expand the forest OFI will also buy agricultural land, including small locally owned palm oil plantations. Once re-planted with native trees, these former plantations will eventually become forest. These corridors and eventual expansion of forest will ensure that wild orangutan populations can survive.

Our future, the future of orangutans, and the future of the planet are all interconnected.  I am asking you to commit to a future which will include orangutans by helping to preserve the tropical rain forests of Borneo and their ecological biodiversity.

The urgency is real. When forest becomes available, it is essential that OFI purchases the land before palm oil and timber interests do so in order to prevent further loss of forest.  We are in that situation right now.

OFI has been offered forest in the areas where we have bought forest previously – critical orangutan habitat we can use to connect forest fragments and directly protect and expand orangutan habitat. If these areas are cleared, wild orangutans will be increasingly isolated, putting them at further risk.

We need your help now more than ever to preserve forest habitat for the orangutans and other wildlife in Borneo.

Please support OFI in a chance to win up to $250K.