Orangutan of the Month: Unyuk

By Dr. Gary Shapiro | In Camp Leakey, Orangutan of the Month, Stories | 0 Comments 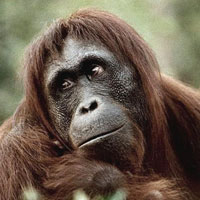 This month, OFI features one of the Camp Leakey veteran orangutans: Unyuk. Unyuk is shown with her daughter, Uning during one of their visits to Camp Leakey. Unyuk came to Camp Leakey in the mid-1970s as a juvenile and quickly showed that she had a bright mind. Unyuk’s favorite activity was to steal the camp canoe and take it for joy rides across the river. She was also one of the only orangutans observed to use branches as weapons to chase monkeys away from food or to defend herself from larger groups of monkeys.

As she aged, she became dominant to other female orangutans like Princess, but still respectful of older orangutans like Siswoyo. Now in her mid 20’s, Unyuk spends a good deal of her time in the forests surrounding Camp Leakey. Yet she will come to Camp when the fruit is scarce or when she wants to visit with visitors and staff.

When Professor Galdikas arrived at Camp Leakey on June 5, she noticed Unyuk had two relatively fresh machete wounds on her shoulder and neck. One of the wounds, which was located where the neck meets the shoulder was 5 inches deep. Fortunately and amazingly the wounds were not yet infected. Unyuk was playful, surprising Professor Galdikas with her energy. However, the deep wound was hideous. Dr. Galdikas immediately returned to the Orangutan Care Center and Quarantine, informed the resident veterinarian, Dr. Rosa, and contacted Mr. Suherti, Head of Tanjung Putting National Park concerning Unyuk’s situation. The next day, the three of them, Prof. Galdikas, Dr. Rosa, and Mr. Suherti went to Camp Leakey. As instructed the night before by Prof. Galdikas, a Camp Leakey assistant had been following Unyuk since the morning. She was approximately 1 km. from Camp. 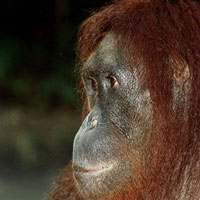 It took Prof. Galdikas two hours to entice Unyuk to come back to Camp Leakey. This day, however, unlike the previous day, Unyuk’s breathing was labored and walking was difficult. She repeatedly pushed her infant Uning away from her. But Unyuk was interested in the fruit that Prof. Galdikas carried. Unyuk and Prof. Galdikas finally returned to Camp Leakey in mid-afternoon where Dr. Rosa and Mr. Suherti as well as others were waiting. It took some time to anesthetize Unyuk. Even failed jabs of the needle would not frighten her away (which would have usually been the case). Prof Galdikas felt that Unyuk knew something was wrong and wanted to be helped. Indeed, the edges of the wound had an ominous yellow color and the inside of the wound no longer had a fresh pink color. Once Unyuk was down Dr. Rosa sewed up the wounds while Prof. Galdikas monitored the vital signs.

Mr. Suherti, Head of the National Park, immediately suggested that Unyuk be taken to the Orangutan Care Center and Quarantine facility for further treatment and observation. During the medical treatment, Uning, who had been clinging to Unyuk’s body when Unyuk had been first anesthetized, had run away into the trees. She returned to Unyuk after Unyuk was gently put in a transport cage with the door open. Once Uning was in the cage clinging to her mother, the door was shut and the transport cage was put on a kelotok. By this time Unyuk had woken up and was looking around.

Once at the Care Center, Unyuk was transferred to a large quarantine cage. Antibiotics were administered daily. She was surprisingly serene in the cage and spent a lot of time looking out towards the nursery forest in the distance. Her wounds improved dramatically. As of June 20, she is still at the Care Center. The veterinary/medical staff will release her back at Camp Leakey as soon as the deep wound has closed more completely. We expect this to happen within the next two to three weeks.

The consensus among Camp Leakey personnel was that illegal loggers working upstream from Camp Leakey macheted Unyuk in the beginning of June as they were leaving the study area. OFI, the local police and community leaders had successfully completed a “clearing out” operation of illegal logging and gold mining in the vicinity of the Camp Leakey study area. The best guess is that Unyuk, who is a very self-confident orangutan, probably had a confrontation with the illegal loggers before she escaped into the trees.

One of the consequences of illegal logging in the Park is that the loggers do attack and, in least in one known case, kill orangutans. Thankfully, Unyuk escaped that terrible the attack with her life and was saved due to the combined efforts of Prof. Galdikas, Mr. Suherti and Dr. Rosa.

On June 22, 2000 Unyuk was taken back to Camp Leakey, her home for over 20 years. Dr. Rosa had determined that Unyuk was well enough to return to the forest. When the door to her transport cage was opened, Unyuk calmly walked out, as if nothing had ever happened, and strode back into the nearby forest to continue her own orangutan odyssey.

One of the significant lessons of this real-life story is that despite the brutality shown towards a non-human animal, in this case illegal loggers attacking a well known orangutan, caring people and organizations can make a difference in rescuing and saving the life and returning the individual back to the wild. This can only continue with the support of people around the world who share the belief that orangutans (and other animals) are important to preserve and deserve a place to live freely in their natural environment.