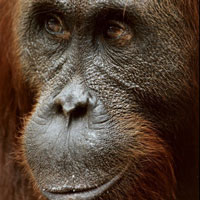 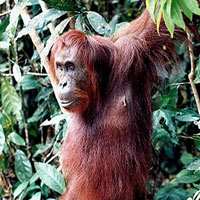 Akmad was Dr. Birute Galdikas’ 1st adopted orangutan daughter, having met Akmad only one month after she first arrived in Kalimantan in 1971. Akmad was rescued from a logging camp by Birute where she was being held in a make shift cage, after they killed her mother in front of her. Even though Akmad was kidnapped at a young age, she likes the company of people. This is probably because Akmad attached herself to Birute as an orphan making Birute her surrogate mother.

“Akmad has been touched by two world’s, human and orangutan” said Dr. Galdikas. Like Princess she travels easily between the two. Akmad is now in her mid-thirties and has had four offspring, Her first born son Arnold, was sadly killed by a wild pig when he was four. Akmad’s second born Aldona, is 19 years old and thriving in the forests of Tanjung Puting National Park. Anthrax, 7 years old, can still be seen following his Mom around Camp Leakey. And Akmad has recently given birth to her fourth child who has yet to be named. Dr. Birute calls Akmad the “gentle orangutan with the liquid brown eyes.”

Orangutan of the Month for May 2017: Mara