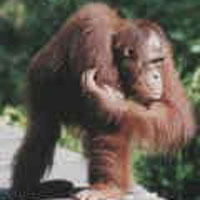 “Gistok is one of the most colorful characters in Tanjung Puting! He once lived with a family as a pet before coming to the reserve. He is friendly to humans, inquisitive and naughty! We saw him hanging in a tree over the river watching us as we headed to Camp Leakey, but weren’t to meet him formally until the next day.

Gistok has never displayed any nest-building behavior and instead sleeps anywhere he can find. He will probably never be rehabilitated as he likes to spend all of his time near the station. We took a walk to an observation platform in the forest and of course Gistok (and the orangutan, Jackie Chan) had to come with us! We soon tired of them hanging on our arms and ran away from them.

Standing at the top of the tower, we’d thought we’d lost them, but eventually Gistok came walking towards the tower, climbed straight up to us and stole our water bottle! Stupid? I don’t think so! He bit into the top of our bottle, a nice souvenir. Sadly, Gistok is now missing, presumed killed by illegal loggers in the last few months. Read the report “The Final Cut” by the Environmental Investigation Agency at http://www.eia-international.org/ to find out more.”

Caroline, a True Beauty of an Orangutan